Remember last summer when we pulled the floor out of the kitchen and dining room? If not, check out the “How I Spent My Summer Vacation” series of posts. They’re a perfect example of how a little project snowballs into something major.

At the time I was adamant that I didn’t want to live with damaged flooring indefinitely, so the plan was to refinish the floor this summer.

But you know about the best laid plans of mice and men, right? They often go awry. Robert Burns’s original is even better: “The best laid schemes o’ mice an’ men gang aft a-gley.”

Our family’s motto should be “gang aft a-gley” because that seems to be our MOA.

We had every intention of refinishing the floors this summer, but the woodpeckers had other ideas.

Yup. The Woodpeckers. Sounds like a 60s band “Hey, Hey, we’re the Woodpeckers, people say we woodpeck around…” OK, maybe not. 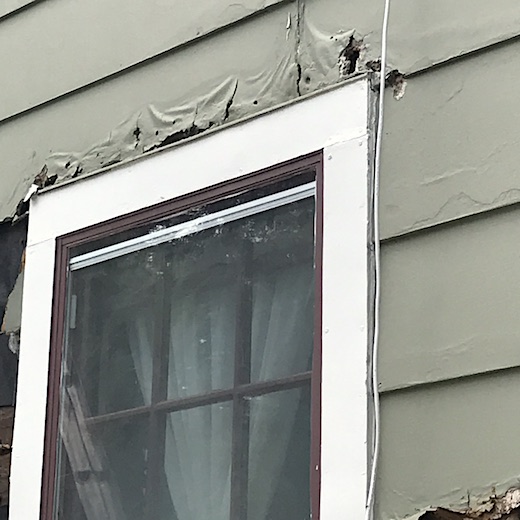 Here’s just a small sampling of their work. 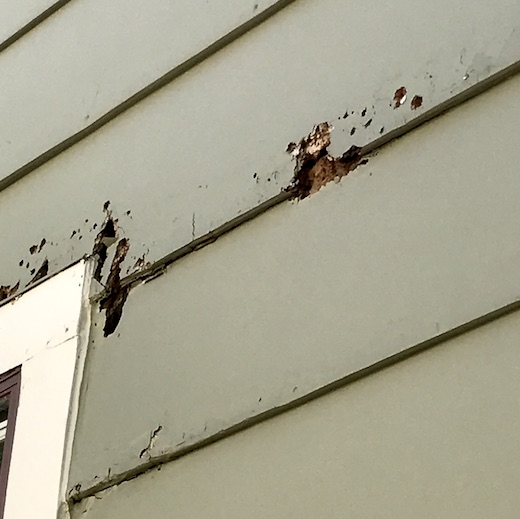 Teacher and my dad repaired the siding several times but finally admitted the band-aid approach wasn’t doing it.

We needed to do something major. Like reside the house. It doesn’t get much more major than that, does it?

I’ll skip the research into types of siding we chose vinyl because it fit our budget best color choices you’ll see those eventually and other boring details. After several weeks of research and repeated runs to Menards we were finally ready to start on a sunny day in early July.

And by “we” I mean “not me.” I do OK with construction but am NOT good with heights. Most of the time I play a supporting role: filling water bottles, carrying this, fetching that, and whatever else keeps my feet safely on the ground. 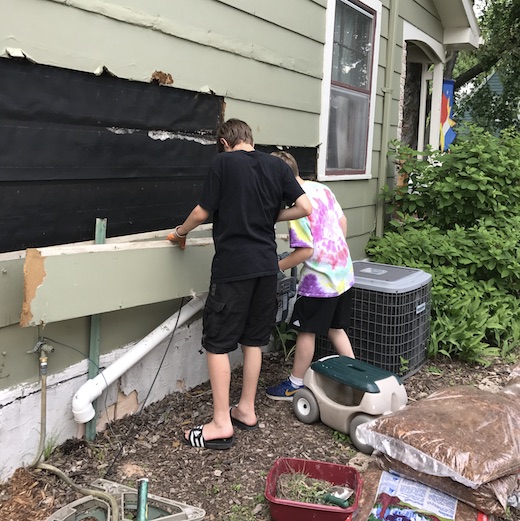 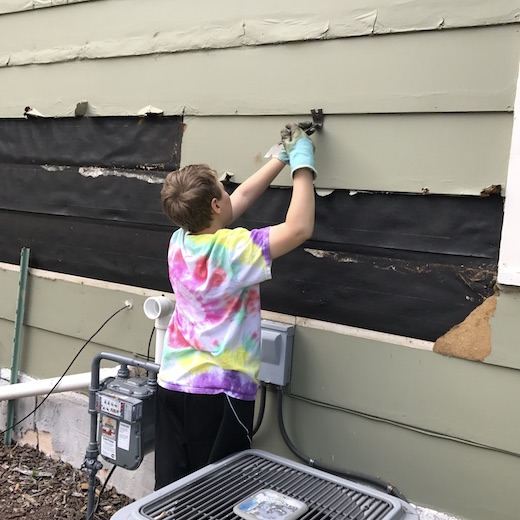 Since we didn’t have work gloves for them yet I found them coated gardening gloves. They look a little funny but actually do protect your hands from splinters. 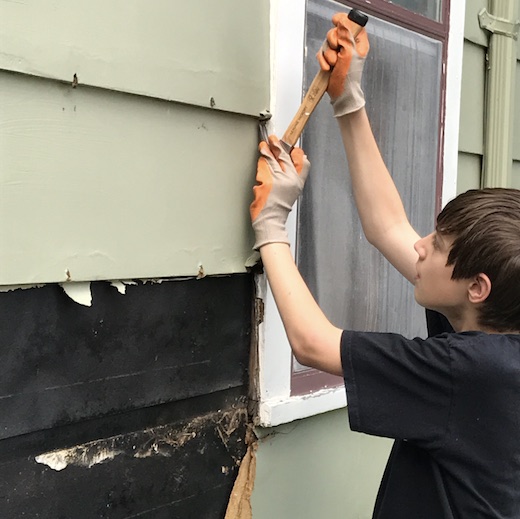 After being called the “little boys” for so long I think they enjoy finally being able to work with “the men.” 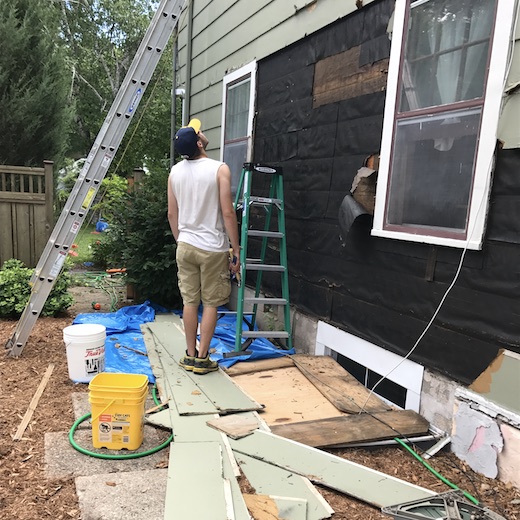 They took a two-pronged approach: while the boys worked on the ground Teacher and Jo-Bear worked higher up. 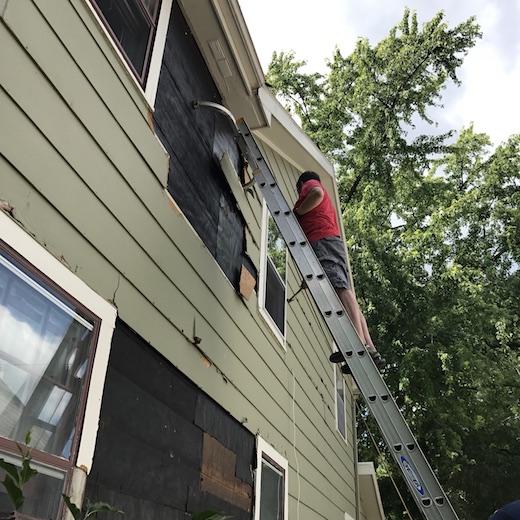 There’s my brave hubby, up high on a ladder. I asked about getting scaffolding, but it’s not cheap to rent and we were told it’s tricky to assemble. So they’re sticking with ladders and I’m doing a lot of praying and not-looking. 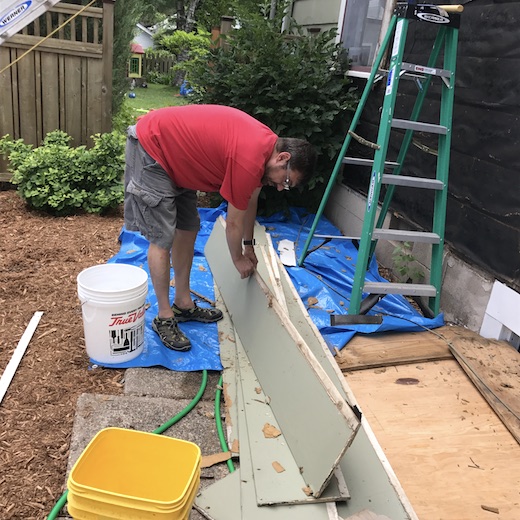 The larger pieces of siding were stacked up. After the boys had pulled down all the siding they could reach the three of us carried the siding out of the way and stacked it by the fence. 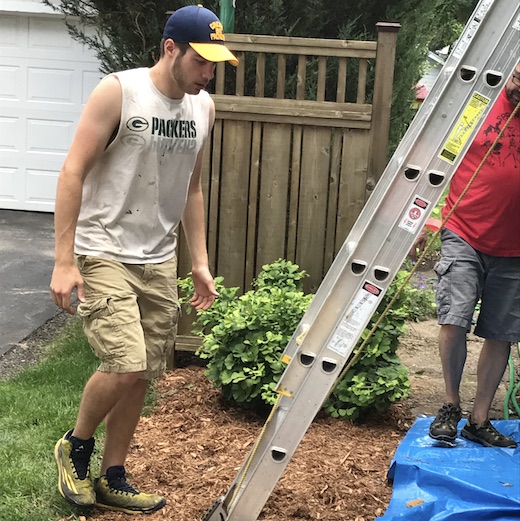 Jo-Bear loves this kind of work. I think it’s because he spent so much time working on “projects” with Uncle Jay when he was younger. 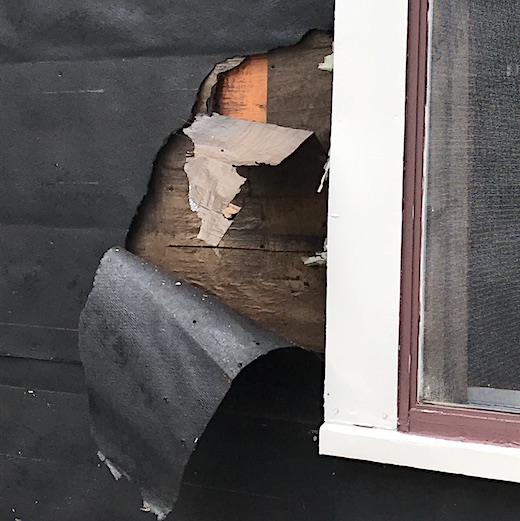 Under the 1960s tar paper you can see the original 1920s paper, and the wood underneath that. There’s probably a term for that wood but I don’t know what it is. 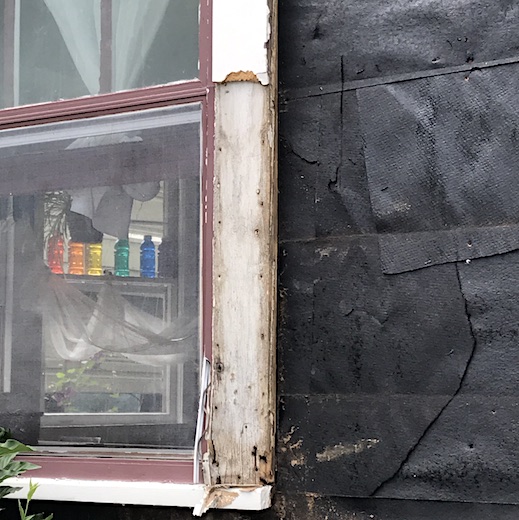 First challenge of the day: The storm windows are sandwiched between two pieces of window trim. In order to remove all the trim the storms would have to be removed, and they’re too old to survive that. We can’t afford to replace all the storms, so we’ll have to figure something else out. 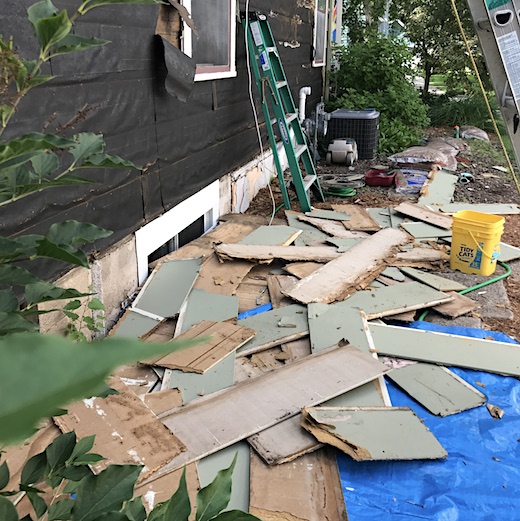 This is what a destruction zone looks like. In the background you can see the bags of mulch that illustrate what I did all day, in between filling water bottles, picking up nails, fetching and carrying, and moving siding.

Scroll up again and look at how fresh and clean it looks.

Better look quick though, because it won’t last.

It’s not so smart to re-mulch BEFORE construction. 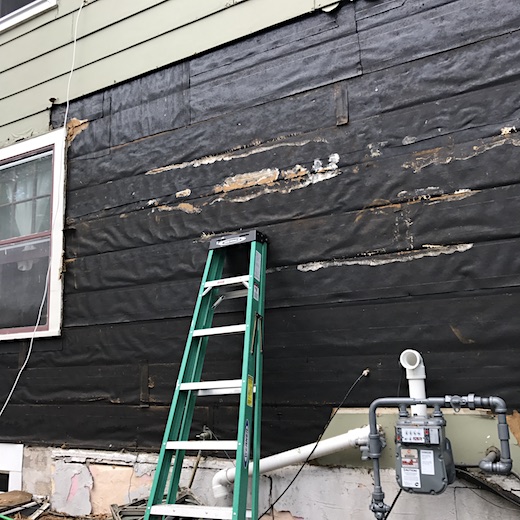 Done for the day. Wanna guess what we’re doing tomorrow?

If it has to do with siding I’ll bet you’re right!