It all started about a year ago when Jo-Bear was visiting his girlfriend, Yoopette. Her cat had a litter of kittens and Jo-Bear, who’s a HUGE animal-lover, fell in love with the kittens and begged for one.

We already had Kippy, Murphy, Laelia, and Snickers, and were planning to get down to just two cats eventually, so we said No. Unequivocally. Repeatedly. No. 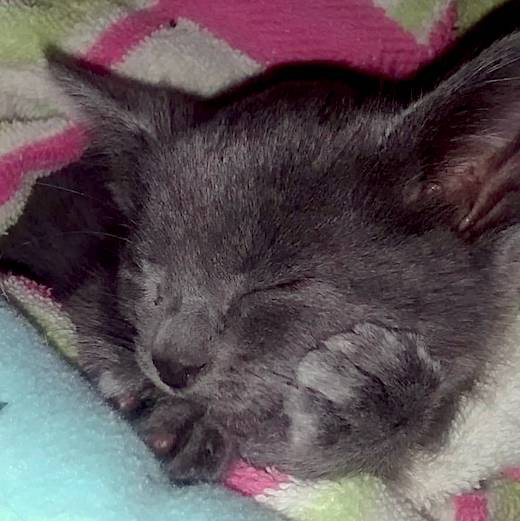 Aunt Di and Uncle Jay came to the rescue by adopting one of the kittens and letting Jo-Bear visit him. I have a weakness for grey kitties, and he was so cute I almost regretted our decision. Almost. Jo-Bear stopped begging for a kitten and I thought that was the end of that.

But I was wrong. 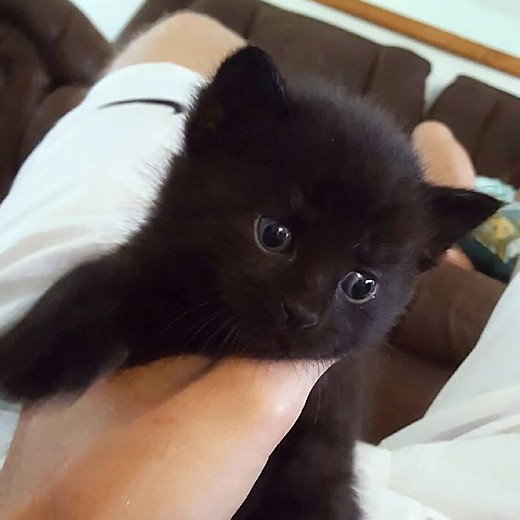 Being an outdoor “farm” cat which Teacher has always said are the best kind, Yoopette’s cat got pregnant again and had another litter of kittens in August. Jo-Bear fell in love with the kittens and begged for one again.

We were still planning to get down to two cats, so we said No again. Unequivocally. Repeatedly. No.

Again, I thought that was the end of that.

Again, I was wrong.

One Sunday night in October I was getting ready for bed when Jo-Bear returned from a visit to Yoopette’s. I opened the bathroom door to see him standing in the hall with his duffle bag on his shoulder and a huge grin on his face. “What are you so happy about?” I asked.

Then a tiny black face peeked out of the duffle bag and my heart melted, “Ohhhhh, it’s sooooo sweet!” Jo-Bear watched me, with a happy-yet-nervous look on his face. Would I really let the kitten stay?

What could I say? The kitten’s mommy was over 3 hours away in the U.P. so I couldn’t expect Jo-Bear to drive the kitten back home at 10pm on a Sunday. I’m sure he planned it that way – his mama didn’t raise any dummies. I was stuck between a rock and a hard place, just like when Princess got Buddy. 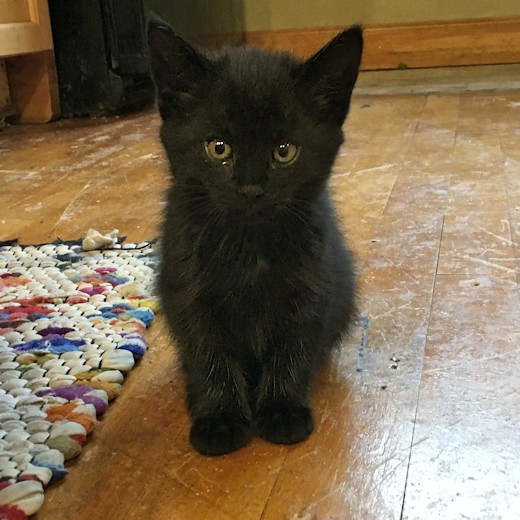 It wasn’t a hard sell – even though we planned to get down to two cats I’d been saying that the next kitten we got would be black, and here was an adorable black kitten mewing at me.

Then a SECOND black head popped up next to the first. Jo-Bear had brought back TWO black kittens!! He explained that the boy, Toothless, was the runt of the litter and had stolen Jo-Bear’s heart the first time he saw him. The girl, Cinder, was for me because Toothless wasn’t totally black and Jo-Bear knew I wanted a black kitten. Besides, how could he separate them? 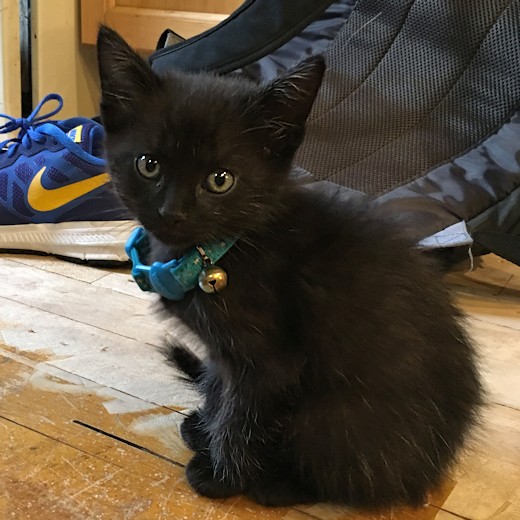 I really wanted to stick by my guns and say No. Unequivocally. Repeatedly. No. 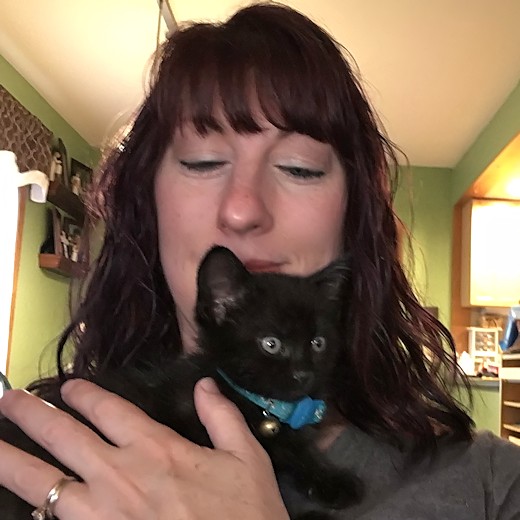 But I just couldn’t. I’ll bet you couldn’t have either. 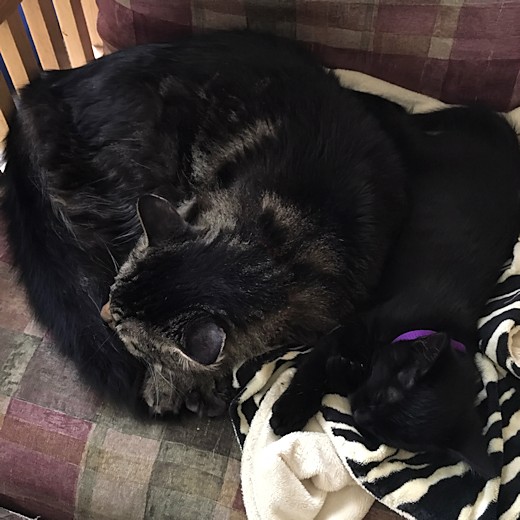 At first the older cats growled and hissed at the kittens to make sure they knew their place in the household, but it didn’t take long for the older cats to take the kittens under their wings so to speak. Cinder especially liked Murphy and often curled up with him to nap. Now that he’s gone she prefers to sleep with Toothless, or in a quiet, out-of-the-way place. 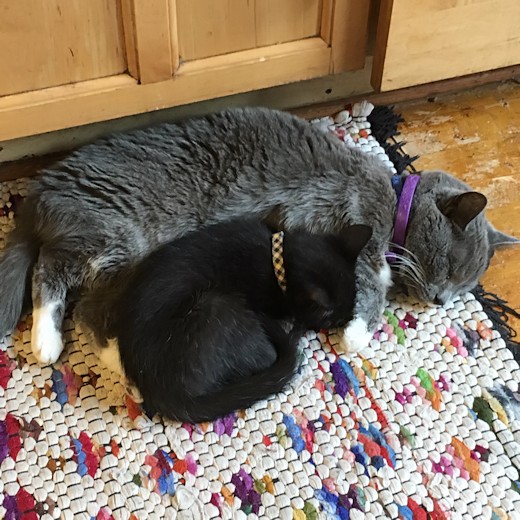 Toothless became attached to Kippy and before he left us Toothless napped with him more than any other cat, except Cinder. 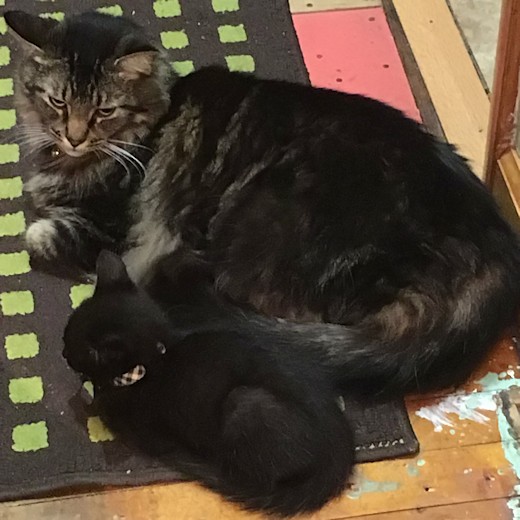 Snickers has grown to like both of the kittens and will groom, play with both of them, although only Toothless sleeps with him. 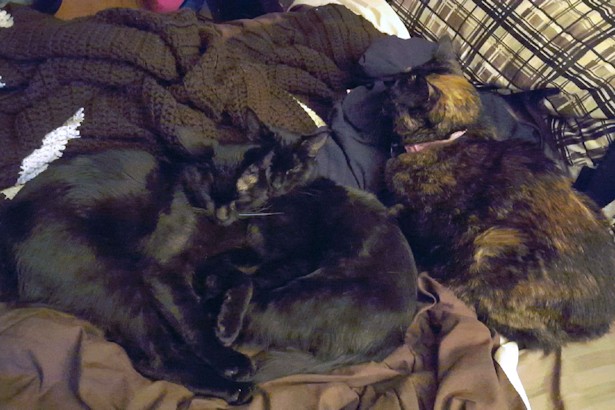 Even Laelia, who’s loathed every cat we’ve brought into the house after her, deigned to let the kittens share her bed – as long as they don’t get too close or try to interact with her. 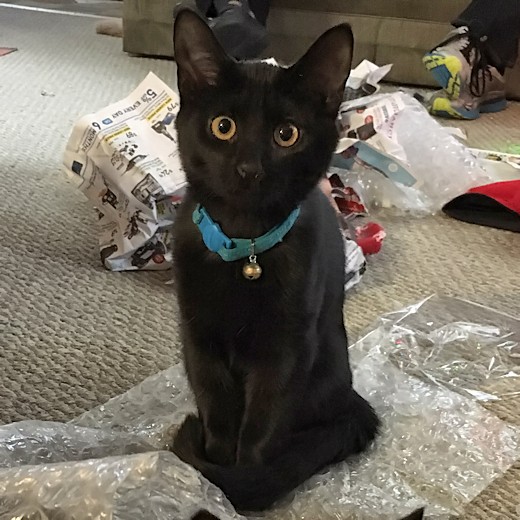 It didn’t take long for each kitten’s personality to emerge. Cinder is super-sweet, on the shy side and doesn’t like being held, but has a strange fondness for being in the upstairs bathroom with us in the morning. She’ll wind between our legs begging for attention – as long as we don’t pick her up. But don’t let her shyness fool you – she can be a real stinker too! She’s lost the most collars of any of our cats which is why there’s a variety of collars in these photos, and after being spayed she came home in a Cone of Shame because she’d pulled her pain patch off at the vet’s. She managed to get the second one off within one hour of being home. She loves to eat fresh flowers, but unlike Murphy who also loved eating flowers, she doesn’t puke them up after. So far Bitter Apple spray has encouraged her to leave the tulips alone. 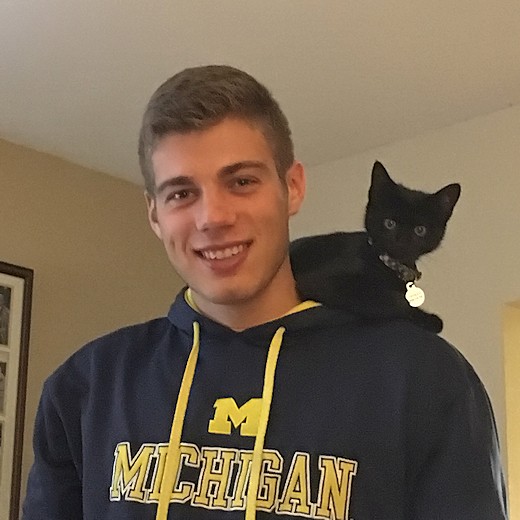 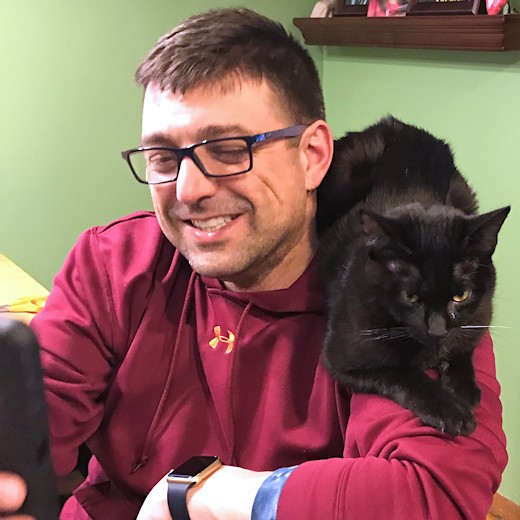 He loves sitting on our shoulders – especially Teacher’s shoulders at mealtimes, where he’ll settle down and doze off. He’s good at getting out of his collar too, but will pick it up in his mouth and proudly trot it over to me. See what I mean about missing some smarts? He regularly attacks the toilet paper, leaving behind a shredded roll and huge mess on the floor. But he’s so loving it’s hard to be mad at him. 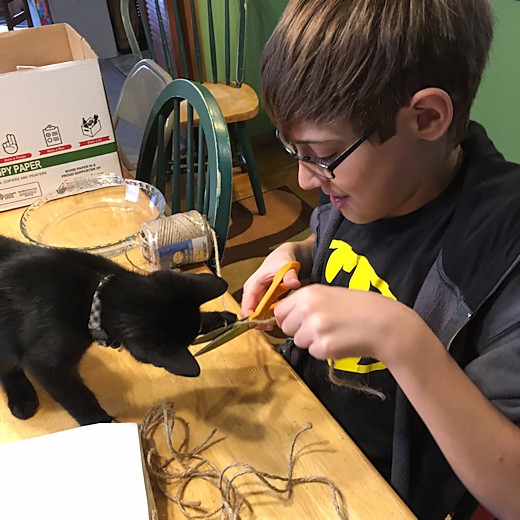 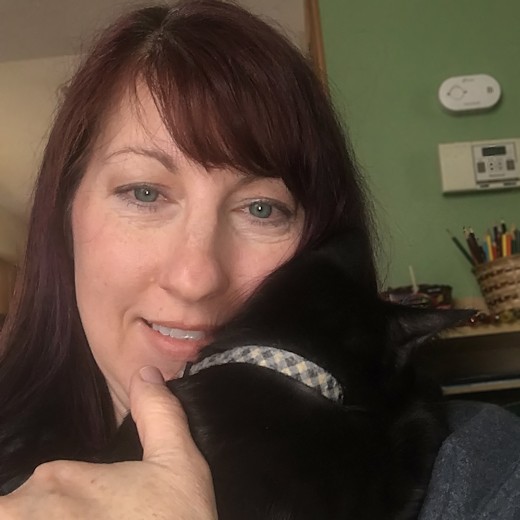 Comforted me after Kippy and Murphy died… 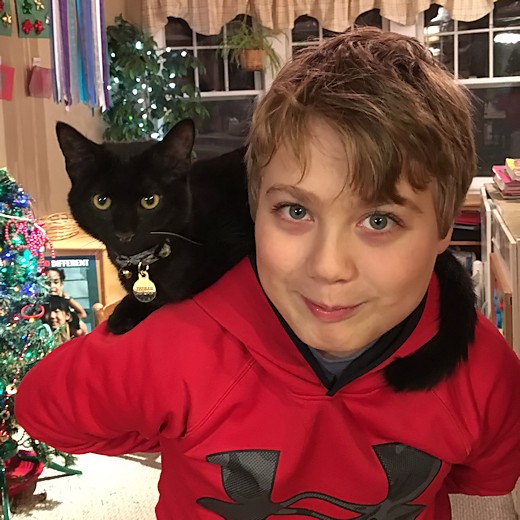 And comforted iMatt too. iMatt took the older cats’ deaths VERY hard, but having the kittens around has helped. I think it’s helped all of us.

I didn’t plan to add any more cats to our household, but I can’t imagine life without them now!