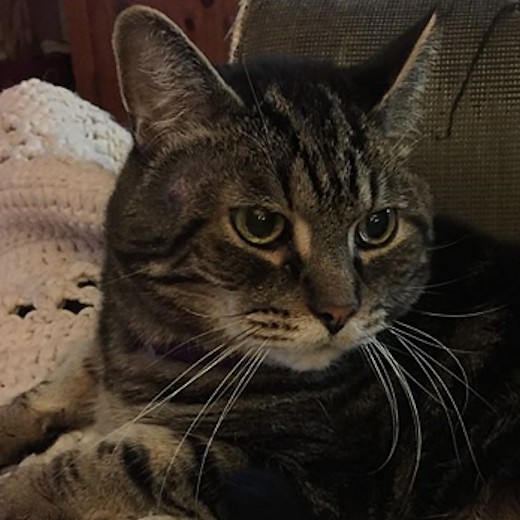 Unlike Kippy, who we knew was sick, Murphy’s death was unexpected. Sure, we knew that at 17 years old his days were numbered, but we didn’t expect him to go anytime soon. Also unlike Kippy, who hovered “on the brink” for a couple of days, Murphy started to decline in the morning and was gone by suppertime. 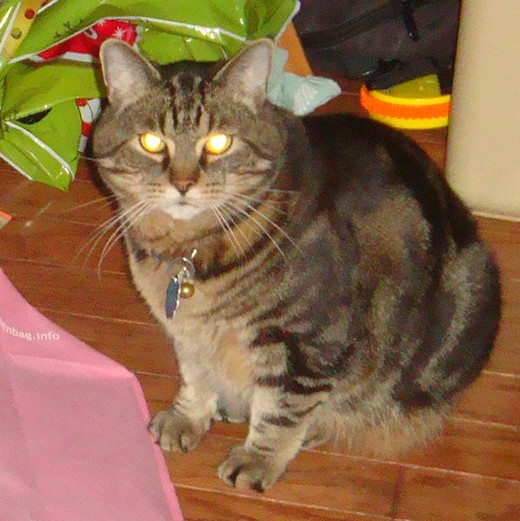 Murphy didn’t have as quirky a personality as Kippy, but he was special in his own ways. Because he was quieter and tended to stay in the background I don’t have many photos of him, but I do have lots of memories.

Murphy was the first cat we got in his house. We’d had to give up our kitties when we went from college to graduate school and hadn’t been able to have any since, so I couldn’t wait to get a kitten once we were moved in here. 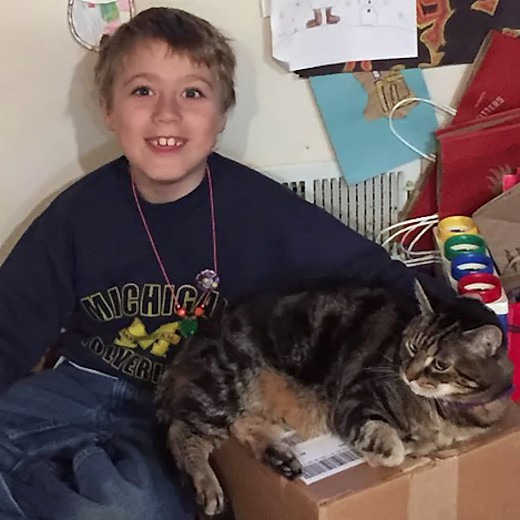 Since we got Murphy from the Humane Society they’d named him Austin he was about 4 months old when he joined our family. Although he was officially my kitty, he probably loved Princess and iMatt more than anyone else in the family.

He also loved strangers. Whenever someone new came to the door he’d come running, rub against them, meow for attention, and be a major pest. He was the same when we had guests and extended family over, ignoring all of us in favor of the new people. Goofy cat!

One of his personality quirks was that unlike most cats, Murphy wasn’t much of a jumper. The only time he’d jump was when there was a feather toy at the end of the “cat fishing pole” – then he’d do backflips and leap to great heights trying to catch it. He also loved glitter pompons and reverted to kitten-craziness when one was around.

When I put the kids to bed he’d follow me up the stairs to lay on the landing facing the downstairs, guarding the kids. This is one of the best memories I have of him – I sure wish I’d taken a photo of him there. As far as I knew he didn’t leave his post all night; when I went upstairs to bed he was there and when I came downstairs in the morning he was there. 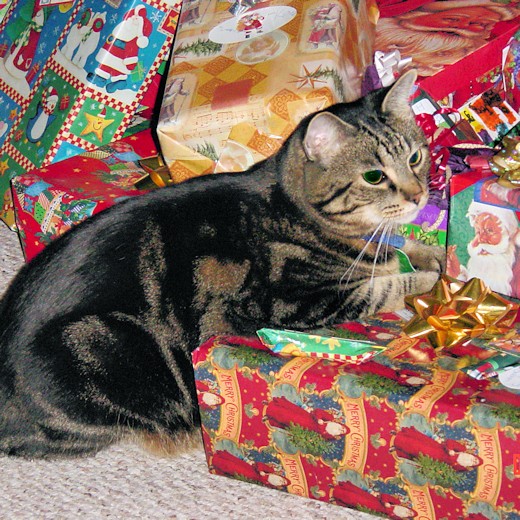 Murphy loved Christmas. He usually spent the day sleeping on our bed, but after the Christmas tree was up he’d lay under it all day instead. He also liked playing with the presents – especially if they had curling ribbon he could eat. I catch on quick and stopped using curling ribbon after he puked it up once. Every Christmas morning we knew we’d find him sleeping next to someone’s pile of presents. 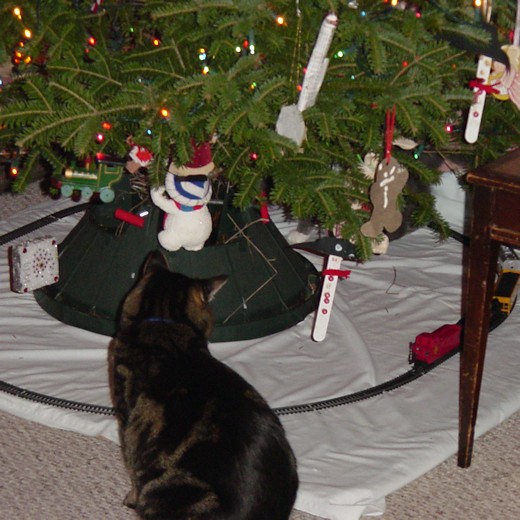 I never knew Murphy to catch a mouse or a Christmas train, but he was a great hamster-finder. More than once I woke up in the middle of the night to see Murphy following closely behind Marshmallow, who’d escaped from his cage. He never tried to catch Marshmallow, he just followed about a foot behind him. 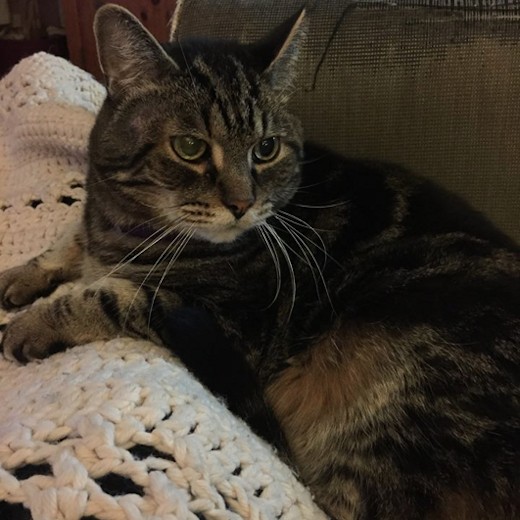 When it came to cuddling, poor Murphy had the worst timing ever. Most weekend nights Teacher and I snuggle together on the couch to watch TV for a couple of hours. It never failed that Murphy would jump onto my lap about 15 minutes before we were going to bed – no matter how early or late we decided to go to bed. 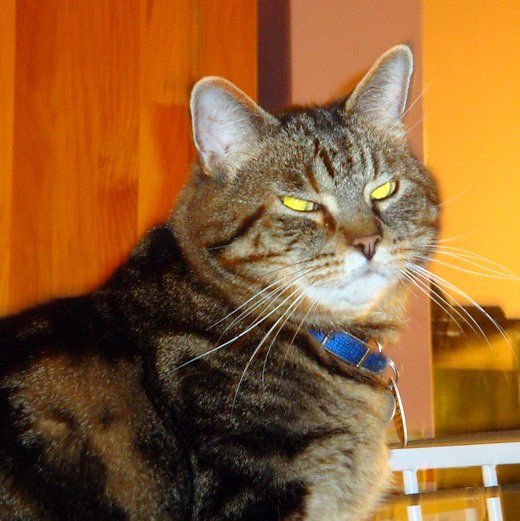 As he got older we affectionately started calling him “Old Man” or “Grumpy Old Man.” When he was younger the only “people food” he liked was turkey, but when he was older he begged for everything. I joked that at 17 – that’s 84 in people years – he’d gotten senile and forgot he didn’t like people food.

One of his less attractive habits was eating leaves, then puking them back up again. Although I was successful at keeping curling ribbon from him, I wasn’t able to completely keep leaves out of his reach – he was an expert at hunting them down. The houseplant by our bed was a favorite midnight snack for him, and his chomping on it often woke me up. Usually “Murphy! Quit eating the plant!” was enough to make him stop.

The night after Kippy died Murphy puked repeatedly around the time I was getting ready for bed. I thought he’d eaten some leaves and scolded him affectionately, “Seriously Murphy, would you quit with the leaves already?!” After cleaning up the mess I petted him and he purred for me. I wish I’d taken more time with him then.

The next morning he wouldn’t eat, which worried me because he never refused food. I tried all of his favorites, then syringe-fed him some water and dry food, which he promptly puked up. I realized that it was the beginning of the end for him when he crept behind the Christmas tree and hunkered down. Murphy always loved the Christmas trees, so I was comforted that he chose a place he loved for the end.

I felt so guilty that I hadn’t given him the time and attention that I’d given Kippy at the end, but I really didn’t expect him to go so quickly. Looking back, I think he was comforted to be near the Christmas tree and able to hear the children and me. And I did go over to pet his head and talk to him several times during the day. 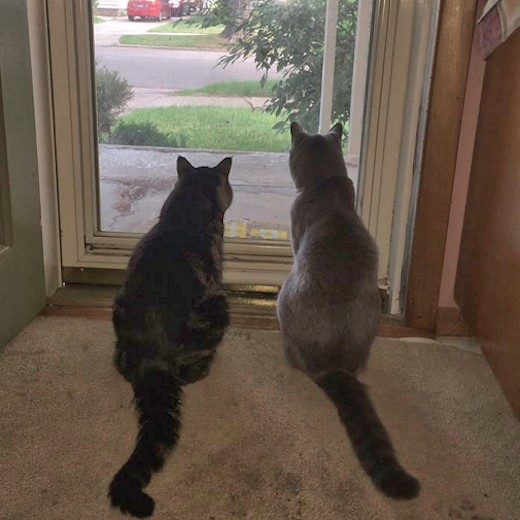 I believe that Kippy hung on until Angel Face came home and said goodbye to him. And I believe that Murphy gave up once his “little brother” Kippy was gone. I like to think that now they’re together again.

Goodbye my Murphy. You were very much loved and we’ll never forget you either.