Last Thursday I was washing dishes when I heard a mad scramble coming up the stairs toward me. I know, it’s shameful that it’s taken me over a week to post, but this saga is worth the wait. I thought it was Laelia, our skittish tortoise-shell who thinks the Bogey Man lives in our house and is out to get her. Instead, I was shocked to see a striped blur flying from the basement across the kitchen floor and dashing under the cupboard a foot away from me with Kippy, our grey/white farm cat in hot pursuit. “Eeep!” I squeaked, and threw myself onto the edge of the sink with my feet in the air while scrabbling sounds came from under the cupboard. Lordy, that must have been a picture with my head hanging over the faucet and my heiney in the air – thank heavens Teacher didn’t think to grab the camera!

Teacher jumped to his feet in alarm, “What is it?!” “CHIPMUNK!!” I gasped, holding on to the sink for dear life. I was holding on so hard I have bruises on my forearms where they pressed against the sink! Teacher hurried over and awkwardly tried to pull me off the sink, but there was NO WAY I was putting my feet down on the floor while the chipmunk was around! “Grab me the stool, or a chair” I suggested. Teacher brought a chair and I quickly scrambled onto it, crawled across the counter to the dining room, and dashed into the living room to perch on the back of the couch next to Princess. 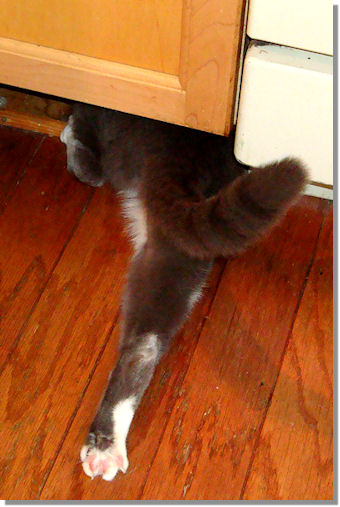 Meanwhile more frantic scrabbling sounds were coming from under the cupboard where Kippy was trying to eat the chipmunk and the chipmunk was trying not to be eaten. “There’s a chipmunk in the house?!” Princess exclaimed. I nodded. “Oh no! Kippy won’t eat it, will he? Don’t let Kippy eat it!” she cried to Teacher. Teacher had grabbed a broom and was poking around under the cupboard and banging on the wall, but the chipmunk wouldn’t come out. After a couple more sweeps Kippy came out and started a prowling vigil around the cupboard. All the ruckus had caught Buddy and Murphy’s attention, they’re two of our other cats, and they joined Kippy in pacing around the cupboard.

After a couple of minutes it got quiet and my fear of having a chipmunk run up my leg fought with my guilt for not finishing the dishes. Eventually guilt won, so I made a mad dash across the floor and leaped onto the chair that was still in front of the sink. While I was finishing the dishes I could hear occasional little noises coming from behind the dishwasher. The cats were still prowling around, occasionally crawling under the cupboard to check things out before coming out dusty and empty-handed. Or empty-mouthed, as the case may be.

Princess headed to bed with a final plea; “Don’t let the cats eat the chipmunk!” “We don’t have much control over it” Teacher said. “And we don’t want it to bite Peanut, or one of the boys” I added. “I know, but they’re so cute…” she replied as she went up the stairs. I finished the dishes then crawled on my hands and knees across the counter to the dining room, thankfully another photo opportunity missed,and sat “pretzel legs” with my laptop balanced between my knees. I did not want to be near the floor in case the chipmunk decided to start running around again!

Soon it was our bedtime too. I didn’t want to leave the chipmunk loose in the house, but Teacher and I were sure that Kippy would catch him during the night. About five years ago we had mice in the house and he caught and ate every one of them except the one who crawled under the piano before dying. I ran away whenever Kippy was mousing, but Teacher watched to make sure the mice didn’t get away. Apparently they crunched cuz he called them “cat potato chips.” Ewwwwww! Now watch PETA get on our case for letting our cat eat mice! But I digress… I wasn’t so sure Kippy would eat a whole chipmunk though, and was afraid of stepping on a half-eaten chipmunk carcass in the middle of the night, or finding it in the morning, or – worse – having one of the kids find it. “Get the chipmunk!” we ordered Kippy, and went to bed.

I’d like to say that’s the end of the story and of the chipmunk, but then I’d be lying. Unfortunately this story is To be Continued…