Take Back that Tantrum

Tuesday morning was bright and sunny again, and so was my optimism. I’d decided that it HAD to be the day the egress window would finally be put in – right?

G’s mom was dropping her off and we were chatting when the phone rang. Instantly my heart sank.

I picked up the phone and looked at the caller ID, “No, no, no, nooooo!” I groaned, stamping my feet and flailing my fists. Startled, G’s mom looked at me with wide eyes. We’ve known each other for almost a year and a half so I’m sure she knows I’m not usually a nutcase… at least I hope she does!

“It’s Ken” I said, “I’m afraid he’s calling to tell me the window’s been delayed again!”

Putting a smile on my face I answered the phone, “Hello?”

“We’ll be there in about 40 minutes, with the heavy equipment and everything; so we’ll see you around 8:00.”

Hooray! “Sounds great! See you in a little bit.”

We hung up and I turned to G’s mom, “They’re going to be here around eight!”

“Now you’ve got to take back your tantrum!” she laughed.

The next few hours crawled by as I tried not to worry that the window would end up being delayed in spite of Ken’s phone call. Every time I heard a truck rumble in the distance I rushed to the window see if it was coming to our house. Since it was garbage and recycling day there were a lot of trucks rumbling around the neighborhood, but no heavy equipment stopped by our house.

A little after eight I looked outside to see my dad standing in the street across from his house, talking to Ken Hooray – Ken was here! Now we just need Donnie with the backhoe and the other stuff – whatever stuff that might be.

I didn’t really expect everyone to show up at 8:00. I figured it would take some time to get everything ready before coming over, but when 9:00 rolled around and I hadn’t heard rumbling I began to feel a little nervous. I looked out of the living window to see a huge dump truck parked across the street, and a grey pick-up truck with a trailer parked out front. Yippee! Apparently they’ve either got a stealth dump truck or I was too busy with the kids to hear it. But where was the backhoe?

I scanned the pick-up truck’s bed and trailer several times but there wasn’t a backhoe. Then I heard another rumbling and saw a bright orange-yellow vehicle coming up the street. The backhoe is here – let the digging commence!

The kids were almost as excited to see the big trucks as I was. While we ate breakfast the crew got all the equipment in place, then the digging began.

Although I obviously couldn’t stand and watch all day, I was able to snap some photos through the windows. I know they’re not the greatest photos, but they’re better than nothing.

Please ignore the dirty windows; I haven’t had time to wash them yet this spring. Wait, who am I kidding? As much as I’d like to wash my windows I’ve got more important things to do. Maybe someday this summer I’ll find time… or not. 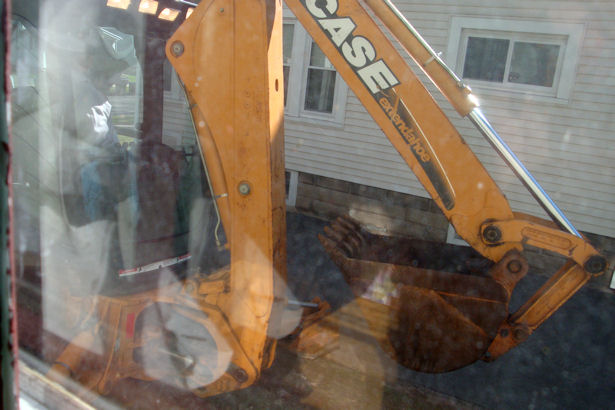 I never thought I’d be happy to have a ginormous hole in my yard, but I was bouncing-off-the-walls excited to see the backhoe dig into our grass. 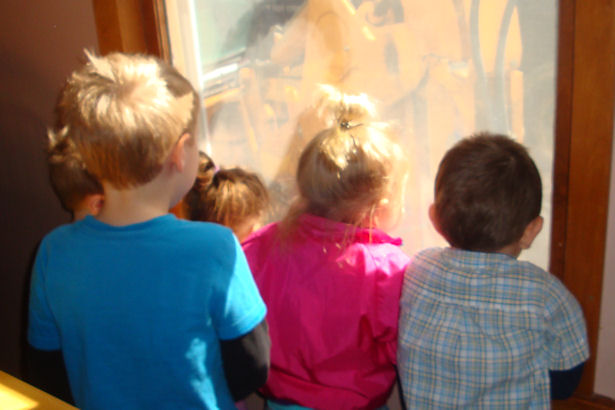 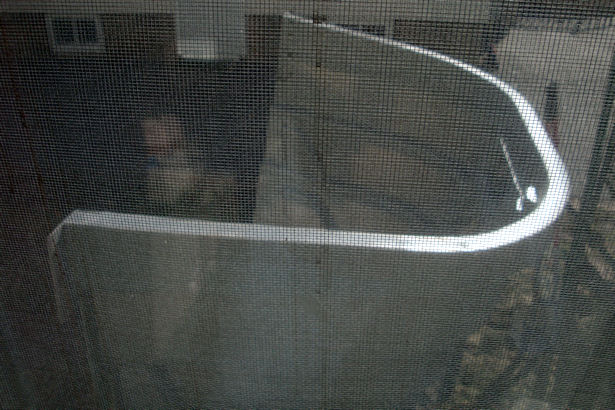 Here’s the well part. We didn’t pick out our window – Ken said he’d put them in before and knew what would meet code and be inexpensive so we trusted him to get what we needed. To be honest, I really don’t care what it looks like as long as it does the job.

When I first saw the dump truck I was surprised by how big it was – I thought there was no way we needed such a big one. Obviously I was wrong! 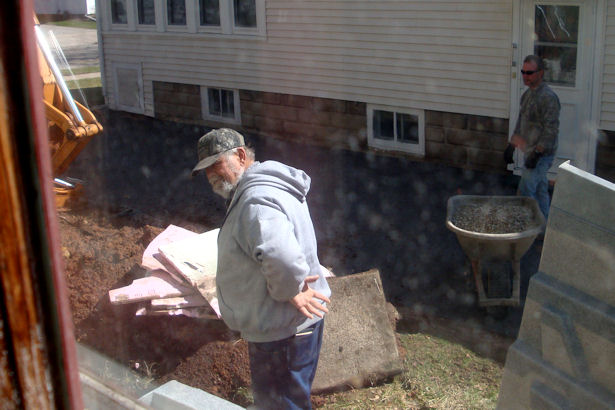 How’s it look from your side of the window? 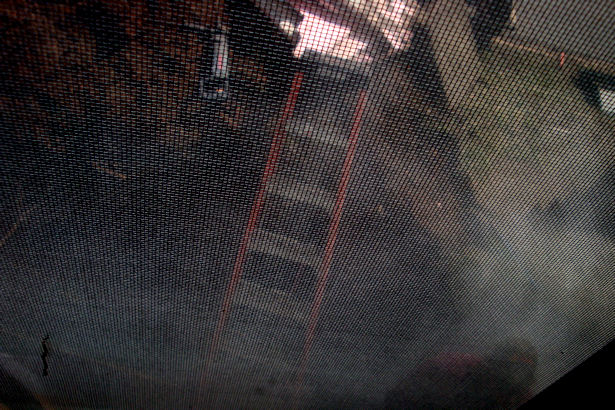 It looks like a big hole from inside the house.

There wasn’t much to watch during the next few hours but there was a lot to feel and hear! They used jackhammers and I don’t know what else to cut through the foundation. It was loud, and since they were working right under the dining room you could feel the vibrations through the floor. 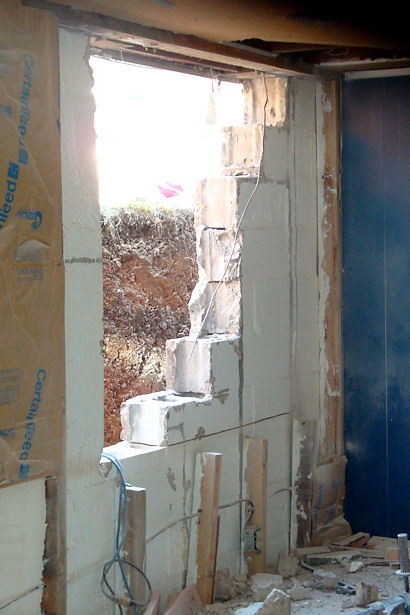 After all the kids were settled for their naps I ran downstairs to snap a few pictures quick before the workers came back from their lunch break. 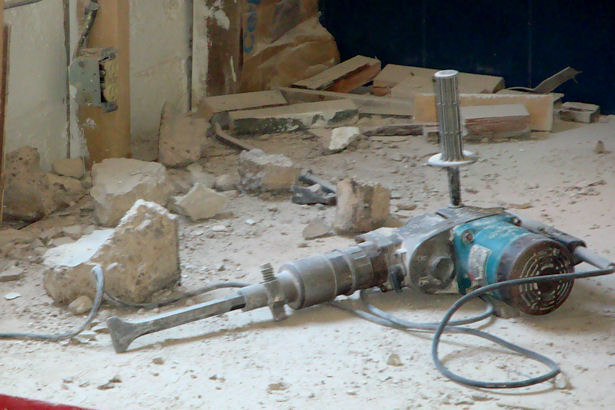 The tool of massive destruction. 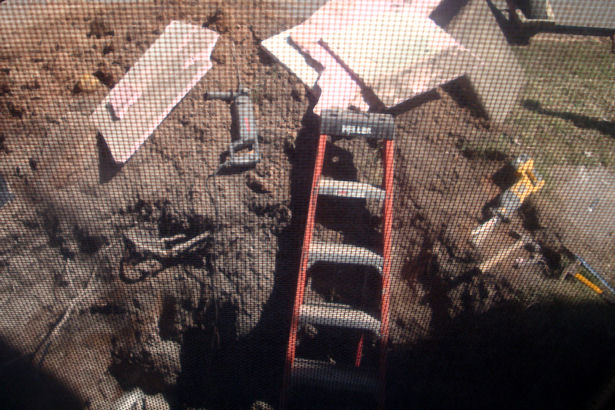 Another view into the hole. It was hard to get photos since the egress window was going right under the dining room window. 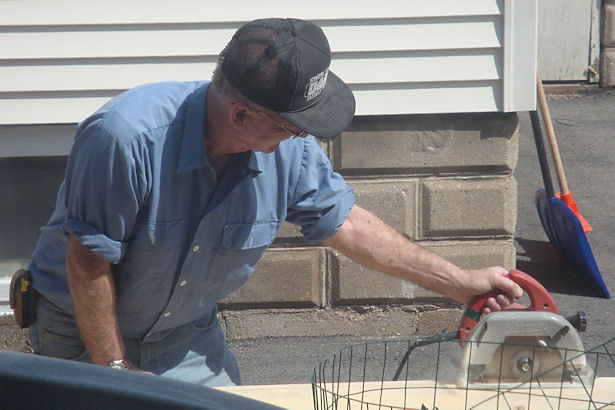 Ken reminds me of the This Old House guys; not the youngest guy around but he really knows his stuff!

I think that’s the header beam for over the window. How exciting! 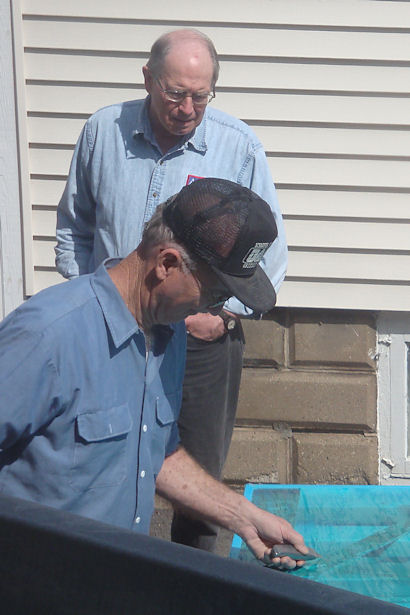 Of course my dad stopped by several times during the day. He said he’d never seen an egress window put in and wondered how they did it. I think that’s only part of the story; I happen to know that he likes to chat with Ken and to be involved with projects like this.

I was a little surprised that the only helping he did was sweeping off the neighbor’s driveway at the end of the day. I kept expecting him to grab a shovel or something and join right in.

That’s the window underneath all that green plastic! The window is about to be put in! 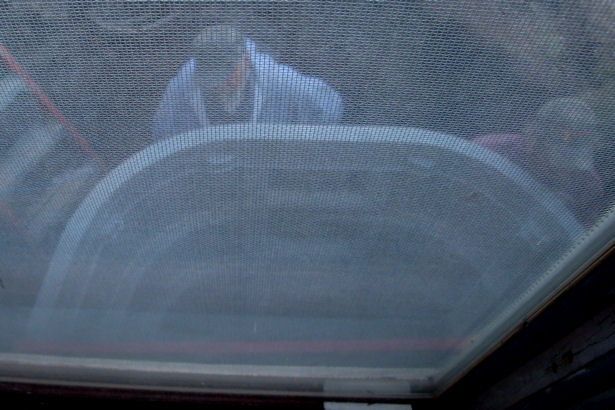 Woo hoo – now the well is being put in place!

Yes, I realize I’m a dork for being so excited, but I don’t care. I yam what I yam. 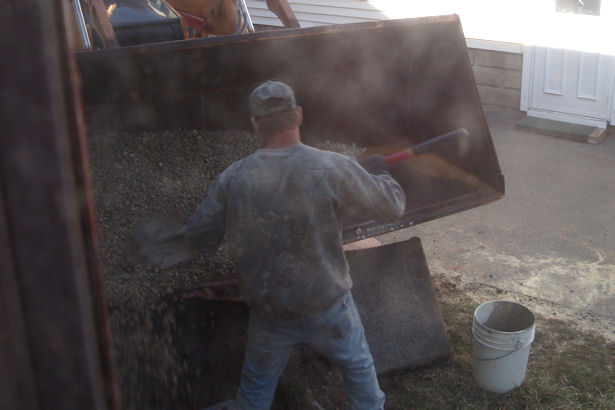 They put gravel around the window well; I assume it’s for drainage. The well is supposed to have a cover but I’m sure water will find its way in somehow anyway. 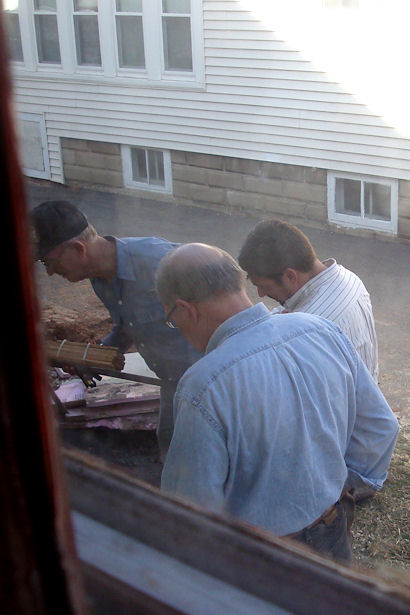 There’s a funny story behind this photo:

Shortly after nap time Irish Girl looked out the front window and said to Love Bug “It looks like your Grampa is checking things out too.”

I looked out the window but the only person I saw was a worker in a dusty maroon sweatshirt. “Are you sure? I don’t see him.” I thought she’d mistaken the guy outside for Teacher.

“I thought so.” she replied.

Irish Girl was right, it was Teacher. Boy did I feel dumb! 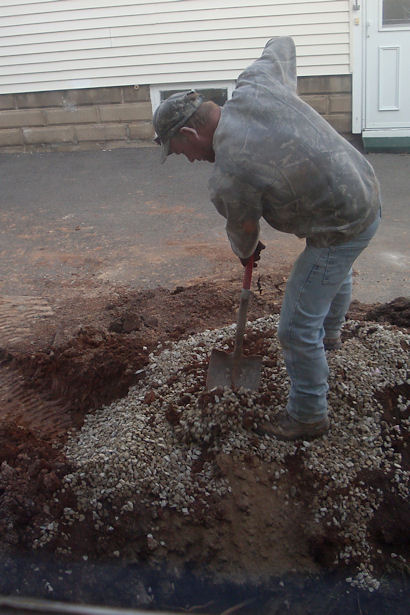 No matter what kind of equipment you have, it still comes down to good ol’ elbow grease. 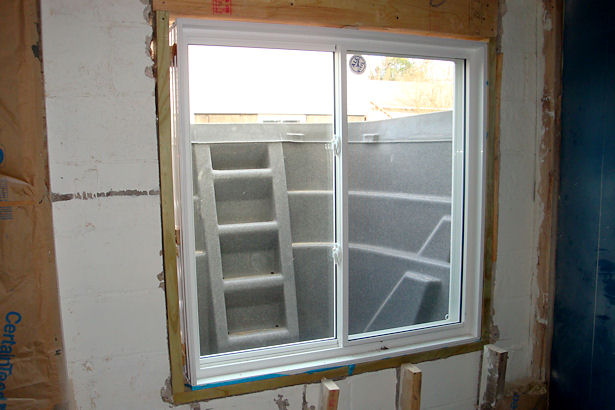 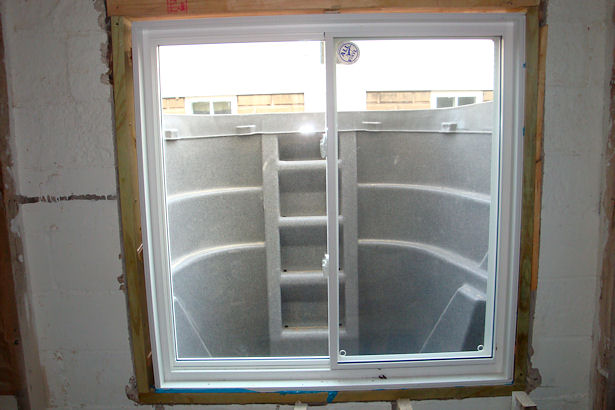 I can’t believe how much light it lets into the basement!

I can’t believe that it’s almost done in just one day!

I can’t wait to see the whole room finished and everything put back where it belongs.