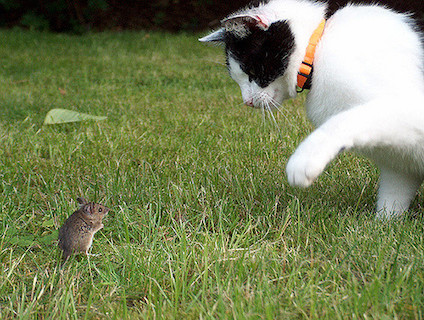 The other morning Teacher took our three kitties to the vet – they hate the vet. One of them – I think it was Laelia – got really mad and decided to get us back. I was folding laundry and felt something wet – soaked actually. Being a mom I sniffed it. Why do moms always sniff things that normal people wouldn’t get near?

Eeeeewwwww! Definitely cat pee! Being a good wife I took it to Teacher, Does this smell like cat pee to you? I asked and thrust it into his face. He jumped back agreeing that it was definitely cat pee. I was NOT happy! This wasn’t any old laundry, it was cloth diapers – most of them my prize Fluffymail dipes that I need a 12 step program for because I’m so addicted to them. I took the basket downstairs and two washes and vinegar rinses I thought everything was fine.

But apparently Laelia wasn’t over her snit yet. Two days later the same load of laundry happened to be in the same place as it was when she peed on it the first time. When I went to fold the diapers there was a puddle of cat pee underneath the basket, spreading from the hardwood floor to the carpet and I could see that the diapers had been sprayed through the basket. Eeeeeewwwwww!! I cleaned up the floor and carpet according to the directions on how to rid of cat urine, threw the diapers back into the washer, and called the vet.

The vet said that it could be either a bladder infection or a behavioral issue and to figure out which it was we needed to isolate the cat we thought was the culprit, and get a urine sample. Get a what??! How do you get a urine sample from a cat? I had a mental picture of me chasing Laelia around with a test tube, trying to catch pee. And knowing her, she’d get mad about being isolated and pee all over anyway. Isolation wasn’t going to work for us.

While I was considering how to catch cat pee I started unpacking a box of fall decorations. I unwrapped some maize and was puzzled by the bare corncobs. Sure, our maize was several years old and a little banged up but I didn’t remember so many kernals missing when I put it away last year. And why weren’t there a bunch of loose kernals in the box? I unwrapped another bunch of half naked corn. The third bunch was totally bare. Suddenly a feeling of dread washed over me as I had an idea of where our corn had gone. I looked in the bottom of the box… sure enough there were mouse droppings. Tons of mouse droppings. Eeeeewwwwww!!!

I jumped back from the box, certain there was a mouse hiding somewhere in the box about to make a break for it. Or worse, a DEAD mouse! Gingerly I poked under the turkey wreath Angel Face made in Pre-Kindergarten… no mouse. I poked at a stuffed ghost Jo-Bear made years ago, imagining a mouse sleeping cozily inside. Holding back a whine I grabbed a tongs from the kitchen drawer and poked the ghost harder. No mouse. Whew! One by one I removed the decorations from the box with the tongs: witch, bat and black cat made from squashed cans; wire spiderweb basket, wooden witch for the front door, votive candle holders… eventually all the decorations were strewn on the table. There was no mouse in site – dead or alive. I breathed a huge sigh of relief and took the box outside to dump the droppings into the grass.

Now I just have to figure out if there are still mice in the attic, and what to do if there are. Teacher and I don’t want to use poison because we don’t want it in the house with all the kids. Traps have to be checked and emptied – not something I want to do! The perfect solution? Isolate Laelia in the attic and let her take care of the mice!

Note: No cats were actually put in the attic *on purpose* although Kippy did sneak up there once and was locked in for a couple of hours. But that’s another story…

Photo credit: Take a Chance by cloud_nine. CC BY NC-SA 2.0