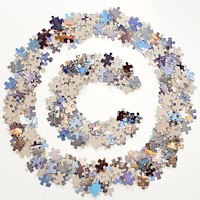 I started writing this over 2 years ago but was so upset by the whole situation that I had to set it aside. Enough time has passed now that I can finally talk about it without feeling sick to my stomach.

A couple of weeks ago I opened a Pandora’s Box of copyright woes – by accident of course. Do these things ever happen on purpose?

I was busy working on my Child Care Curriculum post, and wanted to link to one of the page on my child care website but couldn’t remember the page’s URL. A URL is the www.something.com that you put into the window at the top of your page to find a website.

Because I was feeling lazy and didn’t want to stumble around the website trying to find it, I did a Google search for a phrase I remember being on the page. And viola – there it was at the top of the page! That’s what good SEO will do for you!

But wait… Underneath my page was a short list of other sites, each displaying the exact same phrase as on my page.

What the heck was going on? How could they have the same phrase?

Of course I was curious and had to take a peek at the other sites… What I saw shocked me – my words, exactly as I had written them for my website, but on someone else’s website. Some sites didn’t even fix my typos!

I felt like someone had punched me in the stomach.

I’m not a babe in the woods when it comes to copyright issues. When I was developing pages for my first website, Zany Zebra Designs, I couldn’t find a photo I was looking for so I “borrowed” one from another website and edited it to fit my needs. At the time I thought that what I’d done was OK, but I soon discovered via a DMCA Takedown Notice sent to my web host that I was 100% wrong.

To follow DMCA guidelines, as soon as my web host received the DMCA Notice she disabled the page in question and contacted me to let me know of the issue.

At first I honestly didn’t understand because I really thought that using an edited picture was OK. Once I realized that I was in the wrong I felt really bad, but I also wished I’d just gotten an email that said “Hey, I noticed that you copied one of the pictures from my website – did you know that’s against copyright laws?” instead of the formal Takedown Notice. It would have saved both of us a lot of time and stress.

Eventually things worked out I took down the photo and apologized profusely, and even though the situation was frightening at the time, I’m glad it happened. It forced me to become familiar with copyright laws and I learned what to do if someone copied from my website.

The Google search turned up more than 40 websites that had copied at least a full paragraph of text from my website; either entirely word-for-word or with very minor changes, like replacing my business name with theirs.

Due to my previous experience, I decided that instead of sending formal DMCA Takedown Notices I’d contact the website owners first to point out that they had copied my material and ask them to voluntarily remove it. I also decided that while I was at it, I may as well see if material from any other pages on my website had been copied.

And thus began a saga that cost me much more in time, effort and stress than I imagined it would when it began over a month ago.

And that’s as much as I was able to write 2 years ago. Read on for the rest of the story…

I emailed the owner of each website to inform them about the copyright infringement and ask that they either remove the infringing material or cite my website as the source. As an honest and ethical person I really thought that these emails would take care of things, but I should’ve known nothing is that easy.

The replies I received ranged from apologetic to offended to defiant. I’m not going to go into all of the details mainly because I’ve blocked out many of the details and don’t want to dredge up those unhappy memories but I will share a couple of situations that stuck in my mind.

There was the one who said that if I didn’t want stuff copied I shouldn’t have posted it online, and that I should be flattered to be copied.

There was the one who called me on the phone and told me that even though her webpage was word-for-word the same as mine, she wrote every word herself and I’D actually copied from HER. After 15 minutes on the phone I realized I wasn’t going to get anywhere with her so I sent my own DMCA Takedown Notice to her hosting provider.

There was the one who said she’d be happy to remove the content as soon as she received a Cease and Desist notice from my lawyer.

There was the one who blocked my IP from her website so I couldn’t see that she hadn’t made any changes. Not so effective with the free Wifi all over the place.

I really wanted to resolve things peacefully, but if I didn’t receive a reply or the reply indicated that they weren’t going to do anything about the infringement I sent DMCA Takedown notices to the hosting company.

Some of the replies were so nasty that they upset me for days, but others were more positive.

Several people were horrified to discover that the people who created their website had copied material. They apologized and made the changes right away.

Other people had no idea that they’d done anything wrong and were happy to make the necessary changes.

I even became friends with a couple of the providers I’d contacted, and we’re still in touch today. Those relationships alone are worth the heartache and stress I went through.

So where do things stand now?

Well, I’ve added a copyright declaration to every page of my website as well as a separate Copyright Information page so no-one can say “I didn’t know.”

I’ve grown a thicker skin so I wasn’t nearly as devastated when I discovered more copyright infringement last summer. I sent emails, then DMCA Takedown Notices when needed without getting emotionally involved. At least, not as emotionally involved as the first time.

I’ve also had many providers contact me for permission to use information from my website or for advice with their programs. I love helping other providers and am so glad for the opportunity to “meet” new people.

What’s the moral of the story?

Well, I’ve learned that:
– It’s important to know copyright law and to follow it – not just to avoid getting in trouble, but because it’s the right thing to do.
– I can do the hard thing and I won’t shrivel up and die. Even though it felt like I would the first time around.
– “Mean” people aren’t worth getting upset over.
– There are many more kind people in the world, and they more than make up for the “mean” ones.

Hopefully this is the end of the story. I’m not afraid to defend my work against copyright infringement, but I’d rather help other providers create their own work to represent their own programs.

Oh yeah, and now that I’m over that trauma I’m going to finish what I started and post the other sections of my Parent Handbook.