In for a Penny

“In for a penny; in for a pound” seems to be the current modus operandi around here. Thanks to College Boy – aka Latin Student Boy – for helping me spell that correctly.

Tomorrow morning a giant hole will be dug in the side yard, right next to the foundation of our house. Hopefully within two days we’ll have a brand spankin’ new egress window in our basement family room.

I know it’s dorky to be excited about an egress widow, but I can’t wait!

When Teacher and I first learned that Princess and Peanut would be moving back with us while Cowboy was gone we planned to have them move into the recently-redone basement room.

The saga of the basement room redo is whole ‘nother story, best saved for another time.

The more I thought about things the more I worried; how would Princess and Peanut get out if there was a fire? To get from the basement room to the stairs you need to pass both the furnace and the laundry area – both of which are likely places for a basement fire to start. I doubted that Princess could reach either of the two small windows in the room; much less open one, break the storm window, tear out the screen, and hoist herself and Peanut to safety in time.

I wasn’t only worried about Princess and Peanut; the basement room doubles as a “guest room” when Teacher’s parents or College Boy and his family, or anyone else visits overnight, and Jo-Bear and the little boys spend hours down there watching TV, playing on the computer, or playing with Legos and Playmobiles. What if a fire broke out when they were playing down there?

Teacher and I decided we needed an egress window, for the safety of everyone.

We’d originally made the decision in December so I was hoping the window would be done before mid-January when Princess and Peanut moved in, but the estimate was more than we’d anticipated, so we had to wait.

When we learned that College Boy, Irish Girl and Love Bug were moving in with us until they found an apartment the egress window became top priority. Teacher found the rest of the funds we needed, and I called to schedule construction. 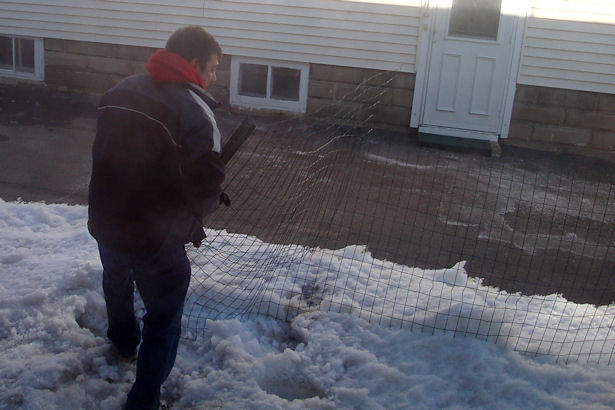 Before any construction could begin we had prep work to do. First Teacher had to remove the fence to allow access to the area. 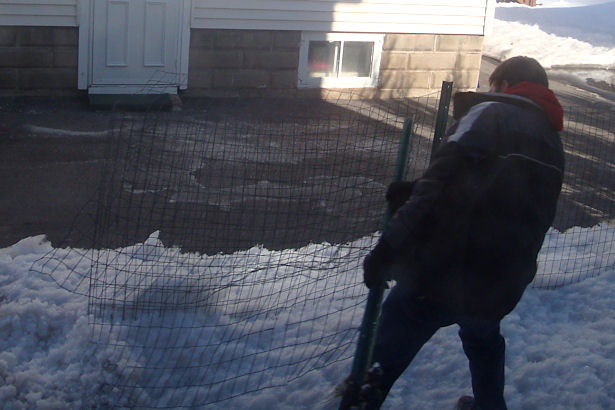 I thought it would be a difficult job but Teacher had it done in no time at all. 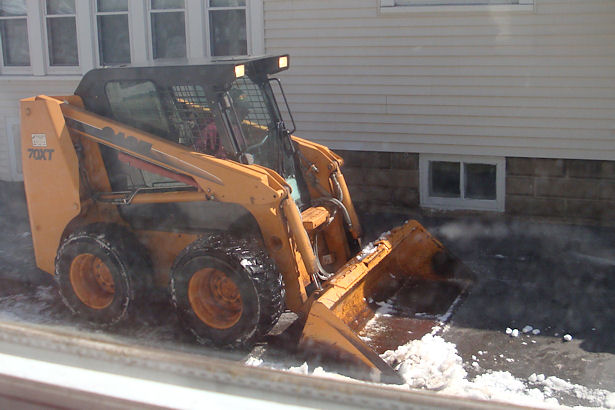 The day after Teacher moved the fence a small bulldozer came to push the snow away from the area.

I wanted to take more photos but the moment I moved the curtains to get a shot all four construction workers whipped their heads around to stare at me and freaked me out. I ended up taking this photo from a different window, by sneaking the camera lens around the edge of the curtain. 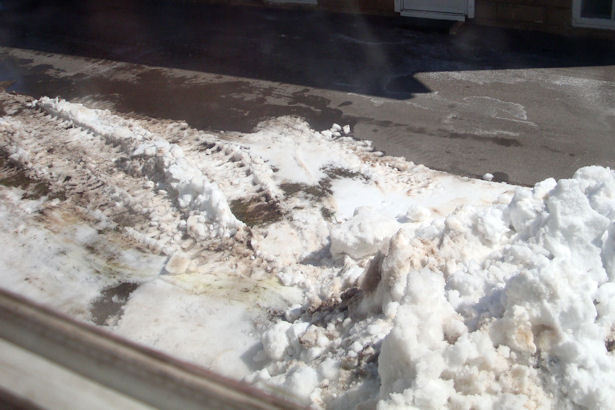 Look – I think there’s grass underneath the snow! It’s almost hard to believe that there’s so much snow left at the end of March, but this IS Wisconsin! 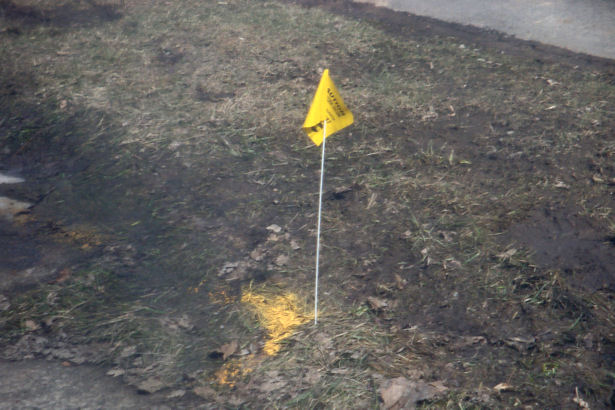 The next day the guys from Digger’s Hotline came to mark the ground. 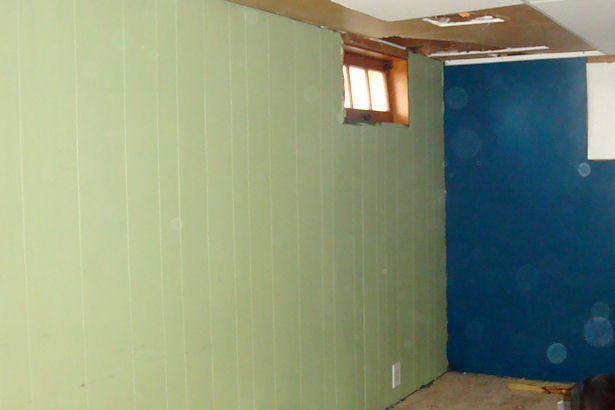 Next we had to clear out the end of the basement room where the window was going to go.

I had hoped to have the window in before College Boy and his family moved in, but we couldn’t schedule it that quickly. They moved to my parents’ house and their stuff moved to the upstairs hallway where they could access it fairly easily.

Wondering where everything else went? 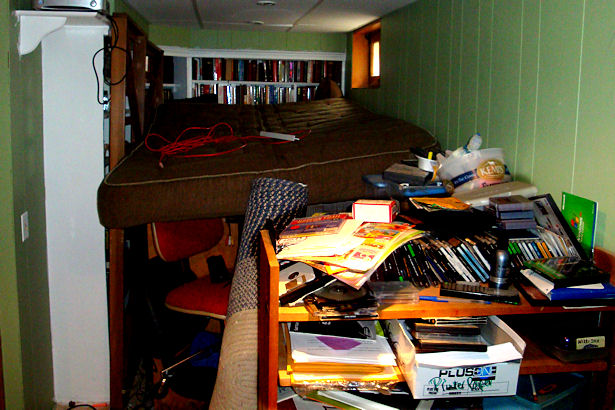 I would have bet that it wasn’t going to fit, but Teacher is a miracle worker and got it all in the other end of the room. 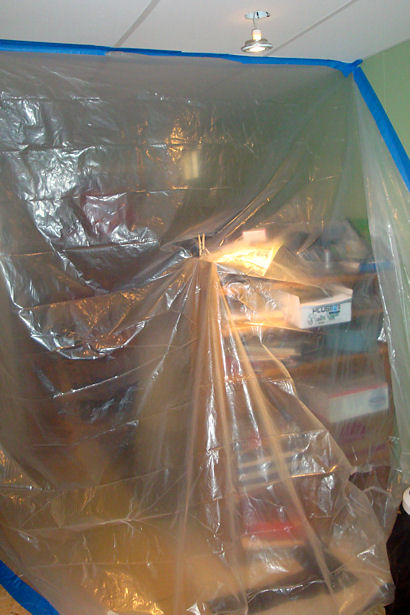 And sealed the whole area with plastic and painters’ tape to try and keep the dust out.

Next we had to take down some of the ceiling tiles, the panelling, etc. By “we” I really mean my dad, Teacher, and College Boy. My job was to make sure there wasn’t anything underfoot that they’d trip over – my dad is notorious for getting so involved in a task that he doesn’t watch where he’s walking – and sweeping up, and generally helping out without getting in the way. 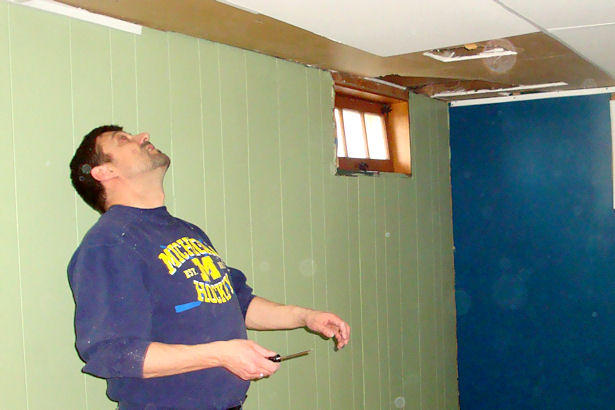 Teacher started on the ceiling tiles. As excited as I was about the egress window it was kind of depressing to watch them taking down everything they’d put up just a couple of years ago. At least it’s only temporary! 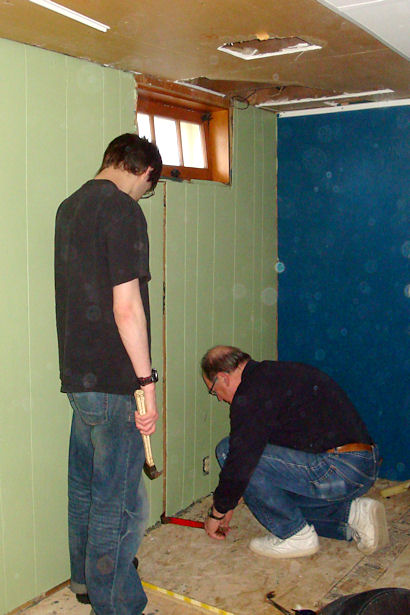 Dad and College Boy started on the panelling… 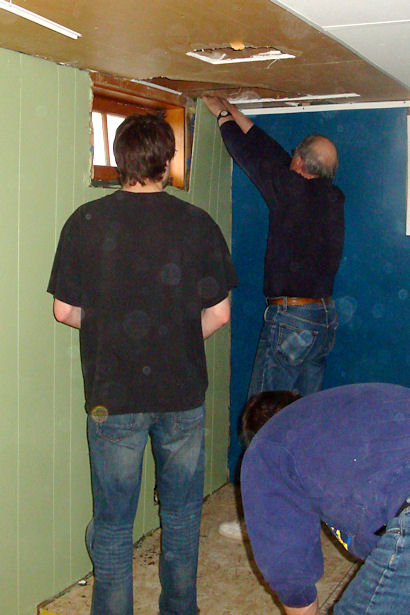 They were being very careful because we wanted to put the panelling back up with minimal to no paint touch-up needed.

Don’t mind the specks in the picture; it’s the dust in the air, not my lens. Whew! 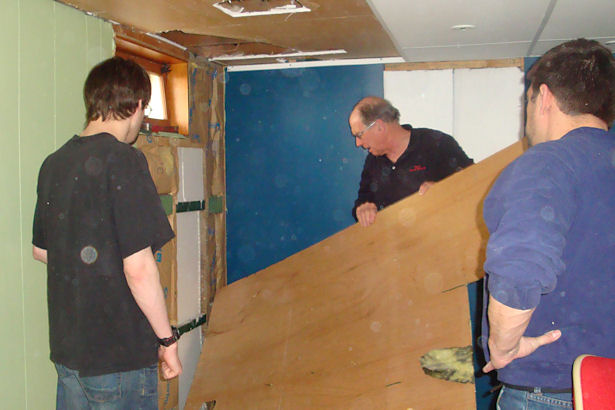 They made it look easy! 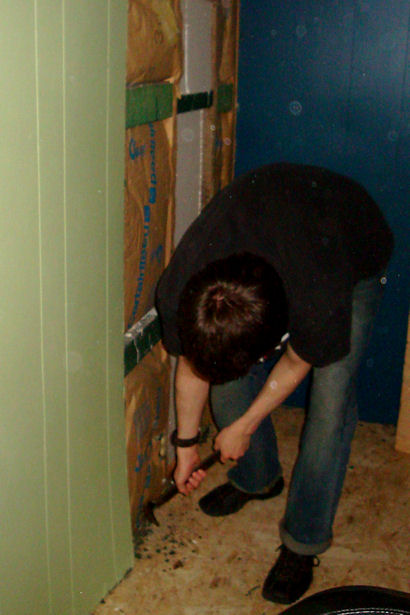 College Boy removes the remaining nails before starting on the next section. 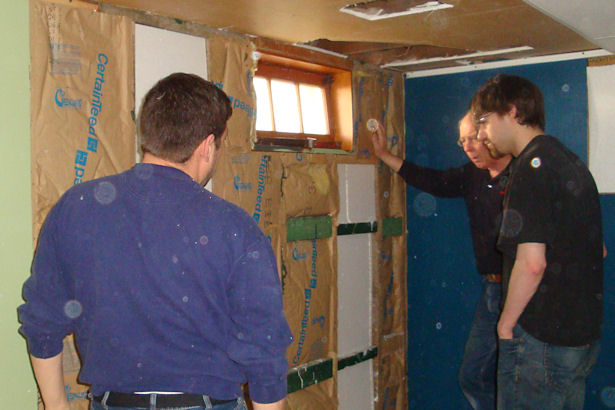 The second section came out as quickly as the first, and the guys took a short breather as they decided what to do next. 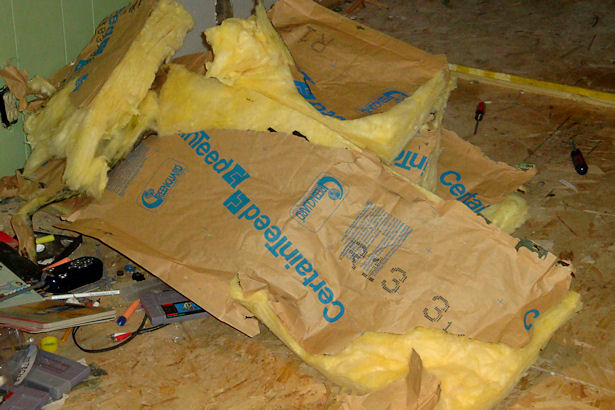 They took all the insulation out before starting any more destruction. 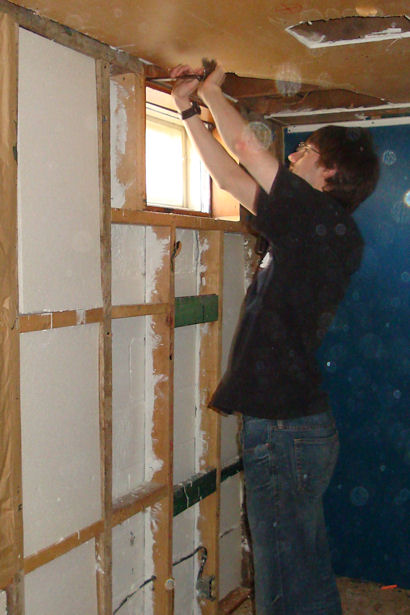 College Boy was elected to remove the window frame… 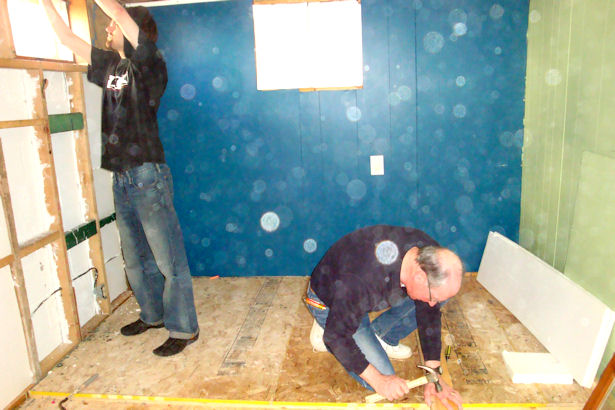 And Dad pounded the nails out. 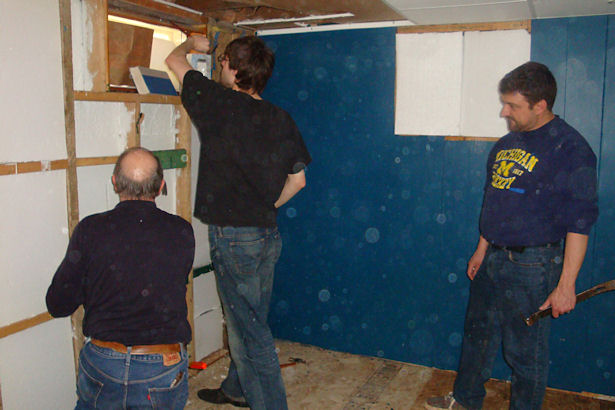 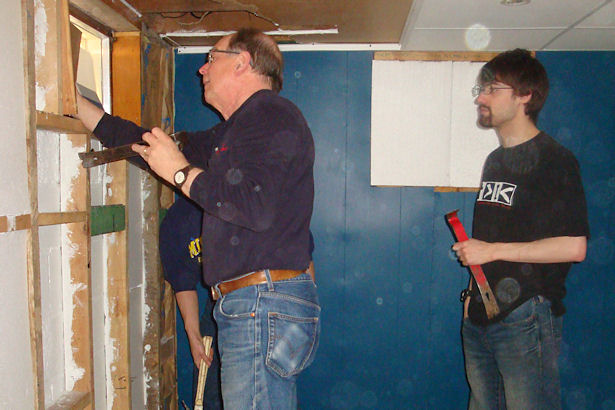 One final check to make sure all the nails are out… 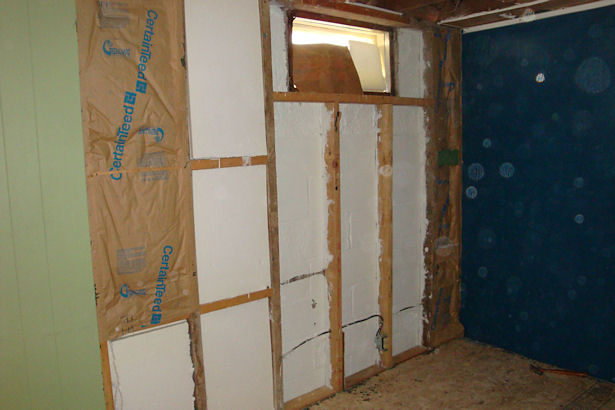 And it’s all set except for the waiting.

Is it tomorrow yet?