When Teacher and I were married I ordered a unity candle from the local wedding shop. I don’t know why we didn’t make it ourselves; maybe we were too busy to think of it, or because back then handcrafted just “wasn’t done.”

Times have changed, and not only is a handcrafted wedding smart and frugal, it’s in style!

Making a unity candle was ridiculously easy and took about 10 minutes. Seriously. It took Princess longer to decide plain white or iridescent glitter than it took me to make the candle. Seriously!

We picked up a tall white pillar candle and two tapers in a craft store. Glitter in the scrapbooking/stamping section was expensive so we raided the children’s crafts section instead and got enough to glitter the entire house.

I didn’t actually glitter the entire house – just the candle, the counter, the floor, and myself.

At home I printed two hearts from the invitation background onto tracing paper, then carefully cut out one of the hearts, leaving about a 1/4″ margin all the way around.

I found some Mod Podge from a past child care project in the basement, but I’m sure watered-down glue would work as well if you don’t have any Mod Podge.

Before attacking the candle with Mod Podge I painted some onto the heart that hadn’t been cut out to test if the ink would run. It didn’t, unless I really scrubbed with the brush, so we were good to go!

Tipping the candle backwards over a piece of scrap paper I poured glitter over the Mod Podge’d area.

Moving around the candle I continued to Mod Podge and glitter sections of the candle until it was all covered in glitter.

I learned that you have to be careful where the sections meet so you don’t get a ridge of glitter. I also learned that glitter ridges can be gently flattened with your fingers.

When I ran out of dry, un-glittered places to hold the candle I carefully held on to the wick, hoping it wouldn’t pull out or break off. It held, whew!

Once the candle was all glittered I let it dry for about half an hour before touching it. Then I was afraid to touch it because I didn’t know if the glitter would flake off or not.

It stayed on, whew again! 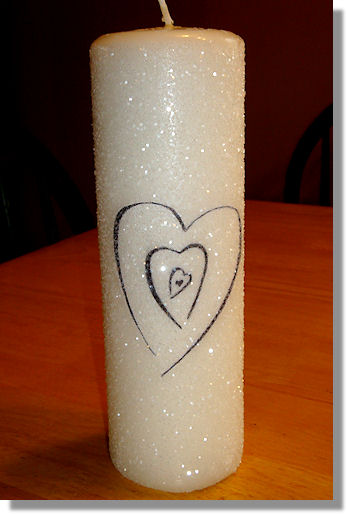 Even when I’m covered in it.

And the counter is too.

You know, there’s tons of glitter and Mod Podge left.

I think I need to buy more candles…