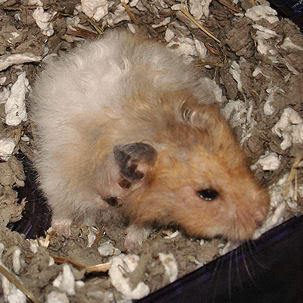 We have an adorable teddy bear hamster… actually he’s our 15 yr old daughter, Princess’s hamster. We bought him for her as a Christmas surprise 2 1/2 years ago; Princess took one look at him and fell in love. His name is Marshmallow because he’s mostly white, with some tan and a tiny bit of grey – like a toasted marshmallow.

Unfortunately Marshmallow is getting old. As I understand, a hamster’s life span is about 2 years so he’s a geriatric hamster. He doesn’t act old, but I’m afraid he has hamster cancer. Last week Princess noticed an area on his neck about the size of a nickle that was swollen, bald, and had a dark spot in the middle of it. To me the spot looked like the melanomas I’ve seen in photos. (If you look carefully you can see the spot in the photo, it’s under his ear.)

Last Thursday we took Marshmallow to the vet. The vet said he didn’t think Marshmallow had a tumor, but had an infection that abscessed – either from the inside of the food pouch out, or in from an injury on the outside. He prescribed a tiny amount of antibiotic for Marshmallow – .1ml – and asked us to return in two weeks or so. Both Princess and I were relieved that Marshmallow was going to be OK and we didn’t have to make any decisions about further treatments or lack thereof.

Marshmallow likes his medicine, and holds the syringe in his little pink paws, lapping the medicine out drop by drop and sniffing for more. After a couple of days the swelling went down and the edges of the scab began to dry out. We were happy to see him getting better!

But on Monday Princess noticed a small pink sore near the original scab. I couldn’t see it on Monday but Tuesday I saw it and thought maybe his scab was itchy and he scratched himself while he was scratching the scab. But yesterday the spot was bigger and darker, and I found a third blotch on his hip.

I called the vet again, and even though he was supposed to be off tomorrow, he offered to come in to see Marshmallow in the morning. Princess will be off from school so she can come along. I’m dreading this appointment and what the vet will say.