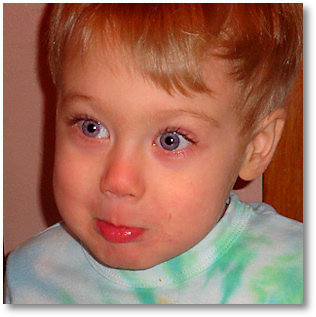 Little Guy is a stubborn cuss – he comes by it naturally since both of his parents are stubborn too. For the longest time he wouldn’t speak much. It’s not that he couldn’t talk, he just wouldn’t. Teacher and I worried on and off about it for months. At the age where our other kids were putting words together into sentences Little Guy rarely spoke single words, much less sentences. He would learn new words and repeat them several times in one day, then file them away somewhere deep in his brain never to be spoken again. We knew he was OK because he could understand us beautifully, and he was able to get his point across through grunts and gestures. But Teacher and I were still frustrated because we had to work so hard to figure out what Little Guy wanted, and because we knew he could talk if he wanted to.

But all this time Little Gut was soaking language in like a sponge and storing it in his brain. Right before Christmas the dam broke and he began to talk like he’d been doing it all his life. It started one night when I was changing his diaper and talking to him like I always do. I was saying something about a cow when he said “Moo!” I was so surprised and excited to hear him speak that I didn’t know what to do.

“What’s a cow say?” I asked again. “Moo!” He replied.
“How about a pig?” “Wink!”
“Kitty cat?” “Mow!”
“Doggie?” “Voof!”
Whoa, I didn’t know he knew these! How many does he know, and where did he learn them?
“What does a duck say?” “Kahk!”
“Rooster?” He looked at me like I was crazy. “Cock-a-doodle-doo!” I said. He looked at me like I was crazy again so I decided to skip that one.
“How about a mouse?” I asked. “Skeek!”
I was astounded! Here was a child who wouldn’t say more than Mama, Dada, and No for the longest time, and he was telling me what all the animals said. Wow! I later found out that Angel Face had been reading him a book with animal sounds and went through all of them whenever she changed him.

Since then it’s been a joy to hear Little Guy speak – made all the more precious because we had to wait so long for it. I love the insight into what’s going on in his mind, what he thinks, feels and understands. Sometimes I wish he’d stop talking, or at least learn to whisper – like the other Sunday when he spent the whole church service pretending I was a castle and climbing his “Wonder Pets Save the Unicorn” figures all over me while saying “Castle! Mine castle! No, castle! Up castle!” etc.

The other night he found two potato cubes that had escaped Teacher’s cooking pot and was making a tower with them. He was so proud of his “little tower” and having so much fun knocking it down that I had to take a quick video of it with my digital camera. His personality shines through, and you’ll get to hear him speak – finally. Enjoy!