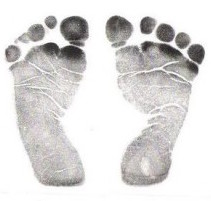 It was an unexpected pregnancy. We’d always planned to have five children – I even asked the OB right after Jo-Bear’s birth how soon we could start trying for #5. But shortly after bringing Jo-Bear home from the hospital Teacher and I looked at each other and realized that our family felt complete. We were perfectly happy being the parents of four children.

Fast forward five years to the day I realized something was missing. I counted the weeks, then counted the pills, and tried figure out how many had been missed that month. Teacher stopped by Walgreens on the way home from work – just to ease my mind. Of course we weren’t pregnant, we couldn’t be pregnant; I was on the Pill.

The little stick told a different story. We watched in disbelief as a second line appeared next to the default one – a very dark, very definite, very pregnant line.

For several days we walked around in shock. Of course we were thrilled about having another baby, but it was a lot to wrap our minds around. Our family was complete, we were happy being the parents of four children; we weren’t going to have any more. Then almost overnight the shock gave way to overwhelming joy and excitement for both of us. We decided to share our good news with our family and friends, beginning with the kids. We bought a Dairy Queen ice cream cake and I wrote “Baby” in fancy letters on top with icing. Fifteen-year-old College Boy figured it out first; “You’re having another baby?!” All four kids were as surprised and excited about the prospect of a new baby as Teacher and I were.

Shortly afterward Teacher and I went to see Dr. Acosta, our OB, for our first prenatal visit. Since we hadn’t been trying to get pregnant I hadn’t paid attention to my monthly dates so we had to guesstimate as best we could. After feeling my belly Dr. Acosta asked how sure we were of our guess because the pregnancy felt more like eight weeks than ten. I was fairly sure we weren’t two weeks off but didn’t think much of it.

Later that day I began to spot a bit. A bit of spotting can be expected after a PAP so at first I didn’t worry, but the spotting didn’t taper off like it usually did. The next day my spotting was heavier – almost a full-fledged period – and I was beginning to worry in earnest. I knew I should rest but was too nervous to lie down so I ironed a bit, trying to hold back the tears, and praying constantly.

I tried to stay positive and concentrated on envisioning myself hugely pregnant or holding a newborn, but my mind kept drifting away to different ways of telling the kids that we’d lost the baby. Now I wonder if my subconscious was trying to prepare me for what was ahead. I couldn’t handle the stress alone but Teacher was working all morning so I called my Mom. She told me in no uncertain terms to call the OB’s office and see what they said, then lie down and not move until Teacher came home from work at noon.

Since it was Saturday I was put through to the on-call doctor. I’ve been told by friends that he’s very kind; I wish I could agree. I could barely control the tears enough to tell him what was going on, and after hearing my symptoms his only reply was “whatever is going to happen is going to happen; nature will take its course and there isn’t anything we can do about it.” I asked if I should lie down and he said “Go ahead if it makes you feel better. It won’t hurt anything.” I know he was right, but at the time I needed caring sympathy – not clinical reality.

Sunday I awoke early, hopeful that the bleeding had stopped and life would go back to normal, but it hadn’t. As the early morning sun flooded our bedroom and soft summer breezes tickled my nose I sat in the middle of the bed, sobbing uncontrollably.

My mom urged us to go to the ER to find out what was going on. Dr. Acosta was off on Mondays and I knew I’d have a nervous breakdown if I didn’t find out something before then so Teacher and I went to the ER.

Up to now my only experience with the ER was taking College Boy when he sliced his hand open trying to cut an apple with a serrated table knife, and watching ER on TV. Based on those experiences I explained to the triage nurse what brought me to the ER, and naively asked about having an ultrasound done so we could see if the baby was OK.

She managed to refrain from rolling her eyes but couldn’t mask a dirty look; “We don’t have an ultrasound tech available on weekends.” Apparently in her book a possible first-trimester miscarriage isn’t much of an emergency.

The doctor that Teacher and I eventually saw looked like he’d just graduated from medical school. He gave us some good news; an ultrasound tech had been called in to see someone else and would squeeze me in afterward. I was tricked out with a catheter for the first and hopefully last time in my life – I offered to chug a gallon of water but they said there wasn’t time for it to work its way through my system and rushed up to the ultrasound room.

The lights dimmed. Teacher sat by my side holding my hand. Our eyes were glued to the monitor. The ultrasound tech didn’t say a word, and didn’t need to. After numerous ultrasounds with our four children Teacher and I both knew what we were seeing – and what we weren’t. Snuggled along the curve of my uterus was a perfect little baby; I could see the head, the bottom, the tiny arms and legs all curled up in the classic fetal position. But there was no heartbeat.

I don’t remember the rest of our time in the ER, except for the poor young doctor’s obvious discomfort at having to give us the bad news about our baby. He took his time coming back to see us after the ultrasound and was so uneasy I felt a little sorry for him.

We returned home around lunchtime – it’s amazing how the visit seemed to last forever yet go so quickly at the same time. Teacher drove through Burger King for lunch but I couldn’t eat. I sat at the table mutilating a a chocolate chip cookie and choking back the tears. We’d told the kids why we had gone to the ER, and that the baby was gone, but they didn’t comprehend it. All they knew was that Mom was really, really, really sad.

The following week is mostly a blur in my memory, but there are occasional moments I remember with crystal clarity:

By Friday it was obvious that nature needed a little help so we prepared for the D&C. Nicole gave up a day of her vacation to sub in the daycare so Teacher and I could go to my mom’s for some TLC after the procedure. Once again I don’t have many clear memories of the day, but the ones I do have are extremely clear. I’m sure my brain was only allowing me to remember as much as I could handle without having a nervous breakdown.

The nurses knew the reason for my D&C and were very kind as they prepped me for the surgery. I’d never been “put out” before so I was very nervous and a little scared, but there was nothing to it. The anesthesiologist asked me to count down from 20 to 1 very slowly – I don’t think I made it past 15.

Tears were trickling down my cheeks I drifted to consciousness. Before I was fully awake Dr. Acosta stopped by to tell Teacher that the procedure had gone well and everything looked normal. When I awoke fully I opened my eyes to see Teacher’s beloved face. Bursting into tears I reached for him.

I wasn’t in pain, but felt so tragically empty inside.

On the way to Mom’s we picked up lunch from my favorite Chinese restaurant. Teacher settled me in bed and cuddled next to me to watch movies – he suffered through a Julia Roberts flick even though he can’t stand her. Now THAT’S love. He was wonderfully nurturing and caring throughout the whole ordeal – I couldn’t have made it through without him.

Teacher and I returned home around suppertime, and life went on. My body healed relatively quickly; my heart much more slowly. Desperate for a physical remembrance of our baby, I replaced the diamond stud in my left ear with February’s birthstone, an amethyst, so I’d have a memorial with me always.

This week it’s been seven years since we lost our baby. But just as rain clouds give way to the sun, this week’s melancholy will give way to next week’s celebration. Z-Man will be turning six and although he can never replace the baby we never got to hold, his bright brown eyes, quick smile, and sweet hugs help fill the hole in our hearts.

Each February as Nicole plans her daughter’s birthday party I feel a pang of wistfulness over the birthday parties we’ll never plan.

Then I kneel down, open my arms wide to Z-Man and Little Guy, and feel my heart swell as they run over to wrap their little arms around me.

I’ll never forget the baby we never met, and will always be thankful for the blessing he left behind. If it weren’t for his brief time in our family we wouldn’t have our sweet Z-Man and Little Guy.

Thank you, Baby. We love you and we miss you. Always.