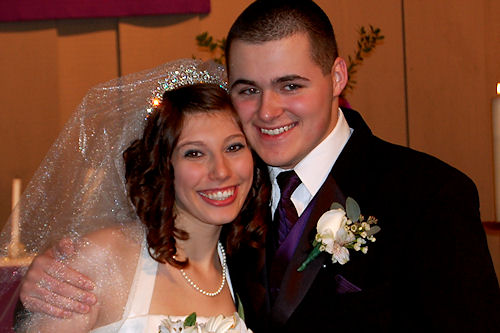 Finally the Big Day arrived. Despite weeks of planning and preparing, I was nowhere ready for it. My friend, my daughter, my baby was getting married. She’d never sleep under our roof as a member of our household again; after the wedding she and Cowboy would set up their own household. And not only was Princess moving out, Peanut would be going with her!

I kept as busy as possible to avoid thinking about it.

Cowboy’s house is about five minutes away from the church so Princess, Peanut, and the bridesmaids invaded his house, filling it with girlish giggles and clouds of hair spray. Cowboy and the groomsmen were banished to his grandpa’s house. They didn’t seem to mind.

Meanwhile back at our place Irish Girl, my good friend Julie, and I finished up the bouquets. They had been arranged the previous day but kept in vases of water so they’d stay fresher. After the bouquets were done everything that needed to go to the church was packed into boxes, then it was time to get changed.

In no time we were on the way to the church. I kept going through my mental list; paranoid that I’d forgotten something essential. Service bulletins and maps to the reception? Check. Unity Candle and wreath? Check. Sandwiches and drinks? Check. Flowers? Check. Camera? Check. Backpack of quiet activities for the boys? Check. Check. Check. Check. Check. We had everything.

Did I mention that I paced nervously?

Since my stress level left me in no shape to deal with the boys Irish Girl kept Z-Man and Little Guy occupied with their sandwiches and books from their “quiet bag” while Jo-Bear amused himself by taking photos around the church with my camera. Most of the photos he took were of the artwork on the church walls – or the church walls themselves.

I chose not to post those. You can thank me later. 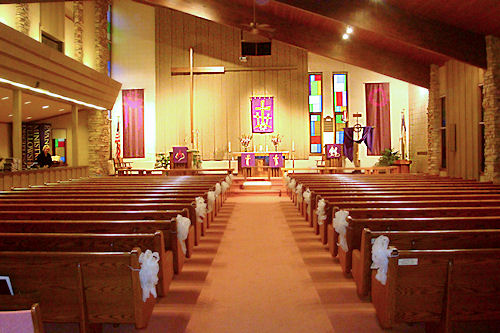 The church was modern and very beautiful. I loved all the natural light that bathed the altar area. Although we didn’t plan it this way, the purple Lenten paraments coordinated perfectly with Princess’s wedding colors. 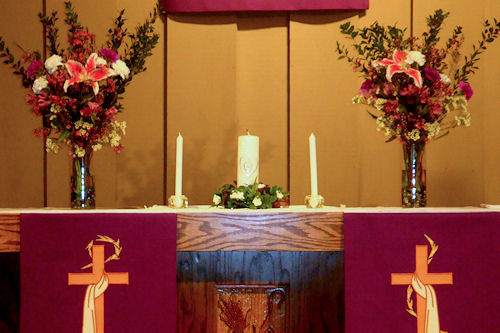 The unity candle was placed in the center of the altar with one of Irish Girl’s bouquets on either side. I bought the unity candle wreath for $8 at Hobby Lobby then Irish Girl wove some purple ribbon through it. Thrifty and pretty, what more could you ask for? 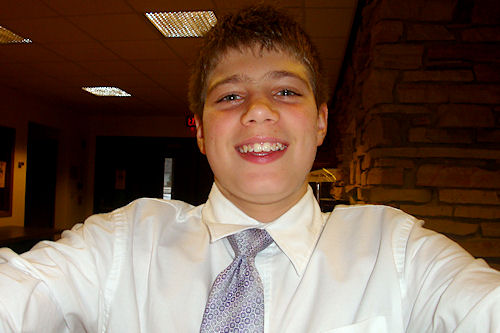 Jo-Bear took a couple of pictures of things that weren’t hanging on the walls – like himself. What a ham!

Finally the girls arrived! I reclaimed my camera from Jo-Bear and went to help the girls get dressed. 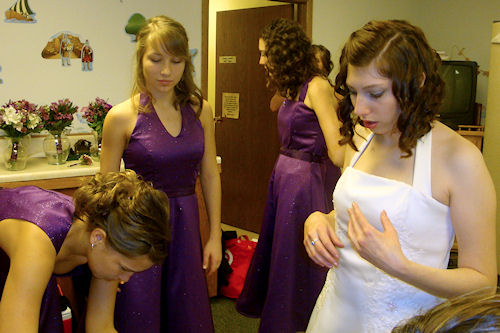 Princess was a tad bit nervous – to put it mildly. 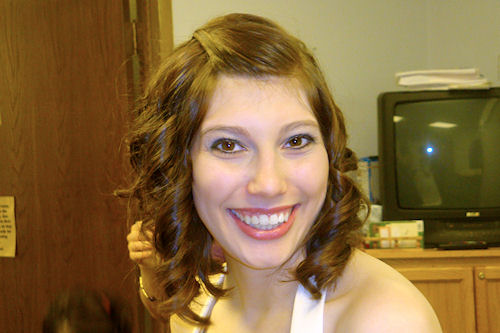 But not too nervous to give me one of her hundred-watt smiles! 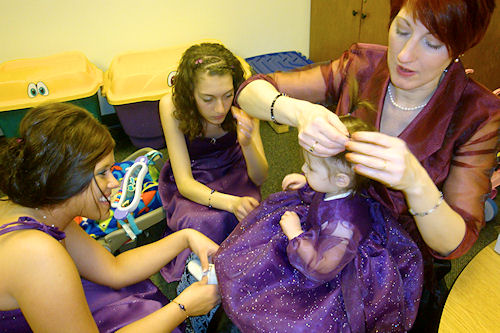 I had the honor of doing Peanut’s hair while her aunt put her shoes on.

When the girls were ready and I left the dressing room, aka the church nursery, Teacher and my parents had already been seated – without the little boys! I’d forgotten to tell them that Z-Man and Little Guy would would need to be ushered in with them.

I tried to take the boys into church but Little Guy resisted. The combination of over-tiredness brought on by too many days without a nap and over-stimultion caused by all the excitement and stress around him the past few days was too much for him. He dug in his heels and refused to go anywhere without the cooler that contained his sandwich and water.

Why he had to have the cooler I’ll never know.

Deciding that this was not a battle worth fighting I grabbed the cooler in one hand and Little Guy in the other. Trying to hide the cooler against my skirt I walked Little Guy and Z-Man up the side aisle to their grandparents.

“He wouldn’t leave it!” I whispered to Teacher’s dad as I set the cooler on the floor and ushered Little Guy into the pew next to Teacher’s dad. I hustled – as sedately as possible – back down the aisle to take my place in the processional line-up.

Jo-Bear ushered me to my place in the front row where I sat for a moment before going to the altar with Cowboy’s mom to light the tapers for the unity candle. We returned to our seats as the pastor, aka Teacher’s good friend Bill, and Cowboy came out from the side to take their places by the rail.

The organ and flute were approaching the end of “Jesu, Joy of Man’s Desiring.” My beloved grandmother had requested “Jesu” when I married Teacher. It had been the pre-processional piece then as it was now for my daughter’s wedding. Tears started to well in my eyes.

Suddenly Little Guy left his place by Grandpa to settle down next to me. “I want mine samich!” he declared at full volume.

An experienced mom knows when to make a hasty retreat so I motioned for the cooler and handed over the “samich” in the nick of time – just as the flute and organ began “Jupiter.” 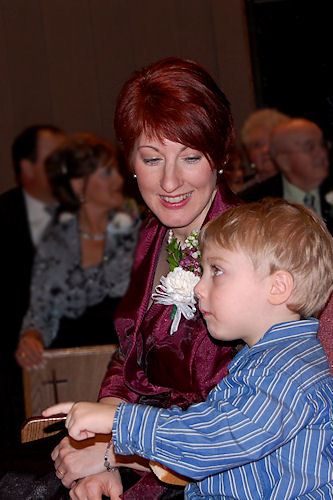 You can see the “samich” under his elbow.

The wedding party processed. Hymns were sung, the unity candle was lighted, vows and rings were exchanged, prayers were said, and then it was over.

My daughter is a married woman.

I don’t feel any different.

She doesn’t look any different. 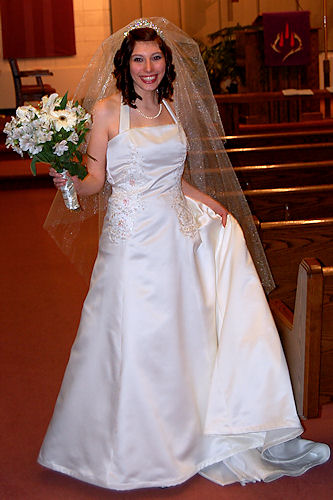 Except for the huge smile on her face. 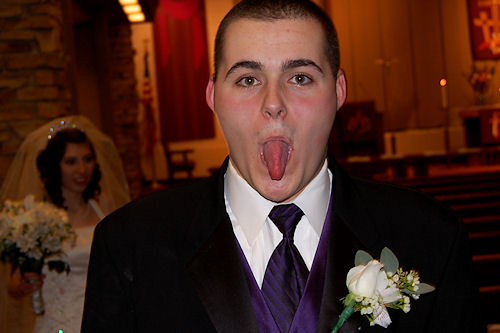 Cowboy, however, looks pretty much the same as always.

I think they’ll live Happily Ever After, don’t you?

PS- I didn’t take any pictures after I was ushered to my seat – I decided it would be tacky for the Mother of the Bride to be snapping away during the ceremony. I’ll post photos from the photographer when we get them.

PPS- It’s not over yet – there’s still the reception to tell you about!