Do you ever get an idea in your head that you think you’ll never do, then the next thing you know you’re doing it?

It all started when Jo-Bear told me “Mom, you should make your own cat food, Aunt Dee does and she says it’s easy and a lot cheaper than buying it.”

My initial thought was Right kid, like I’ve got time for that. But the idea stuck in my head. Aunt Dee is fantastic at saving money so I knew that if she said something was cheaper it definitely was. And after Kippy and Murphy died I’d learned that dry food isn’t good for cats, and have been feeling guilty wondering if their kidney problems could have been prevented by a better diet. Yes, Mama guilt includes cats.

Research at The Cat Site Forums, Cat Info, and Cat Nutrition convinced me that making homemade cat food was do-able. I especially liked Cat Info because it’s written by a vet and has a TON of information – not only what to do, but why to do it.

At first I was afraid to broach the idea with Teacher because I didn’t want him to think I was crazy, but when I did he was 100% supportive. I should’ve expected that – he’s always 100% supportive.

So far I’ve made three batches of homemade cat food, and will be the first to admit that I’m NOT an expert! My goal here is just to show how easy it is to make homemade cat food – if you have questions please refer to the Cat Info and Cat Nutrition websites, and join the Cat Site forums. Tin Paw has a great article about making cat food too, although our cats have sensitive tummies so I’m going to skip the recipes that include veggies.

I’m following the Cat Info recipe, using chicken and turkey thighs. The first time I followed the recipe exactly, but the cats weren’t thrilled with the dice-sized chunks of half-raw chicken. The second time we cooked the meat completely, then Teacher “shredded” it in the food processor, and the cats liked that a lot better! Except Snickers, aka Problem Child. 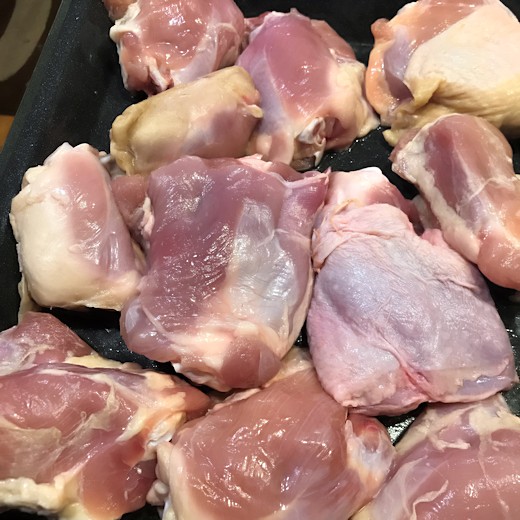 First you remove some of the skin, then bake the meat. I’ve got chicken thighs with two turkey thighs to add flavor.

The first two 3-lb batches I made only lasted half a week so this time I’m making a triple batch, which will hopefully last a whole week. I don’t have time to make homemade cat food twice a week. Once I get the recipe tweaked so Snickers likes it I want to make 2-3 weeks’ worth at one time. 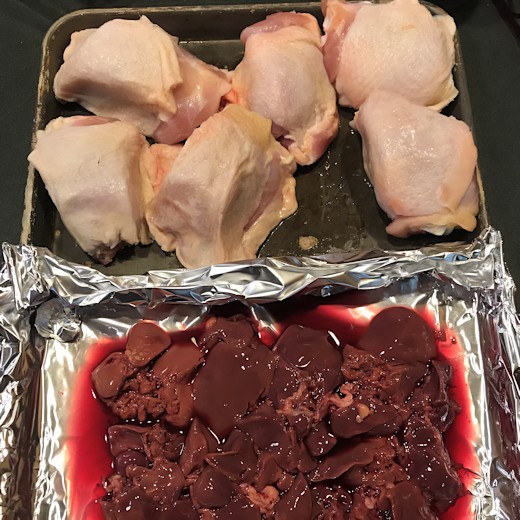 You also need to cook the chicken livers. The first time I cooked them on the stovetop but Teacher helped with the second batch and baked them. How clever is the foil divider to keep the thighs and liver separate? Go me! 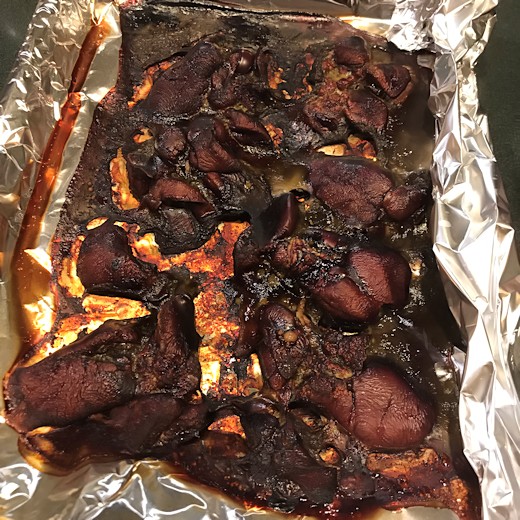 The liver cooks in about half the time as the thighs – I overcooked these a little but I don’t think the cats will mind. After all, they lick their own butts! 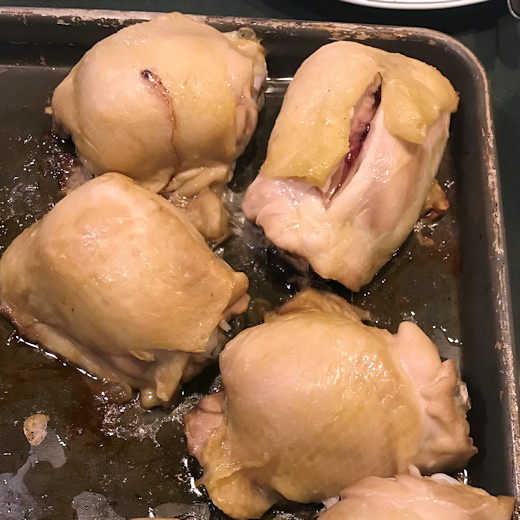 The chicken thighs weren’t done, but I went ahead and removed the bones anyway. We don’t have a grinder yet so we’re pressure-cooking the bones, which is the most time consuming step.

You don’t need to use all the bones in the cat food so I only deboned enough thighs to provide the right bone/meat ratio. The rest were left in the thighs to finish cooking. If I hadn’t been in a hurry to get the pressure cooker going I would’ve left all the bones alone until the meat was done. 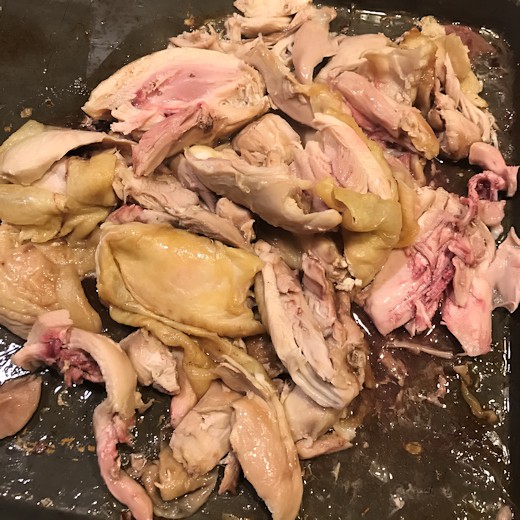 I plan to cook the chicken a little less each time so the cats can slowly get used to half-raw meat, but this is too raw for now so it’s going back into the oven.

Dr. Pierson does a great job explaining why cats should have half-raw meat on the Cat Info site so I’m not going into it now, except to say it’s close to their natural diet of all-raw critters. 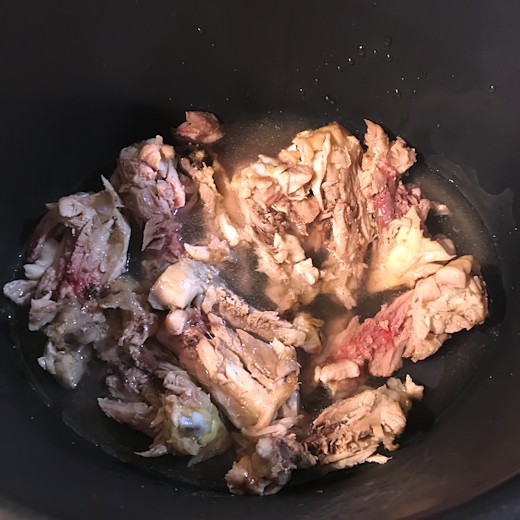 I put the bones into the pressure cooker and added enough water to almost cover them.

While making my second batch I learned that turkey thigh bones need longer than 90 minutes in the pressure cooker, so now I only use chicken bones. 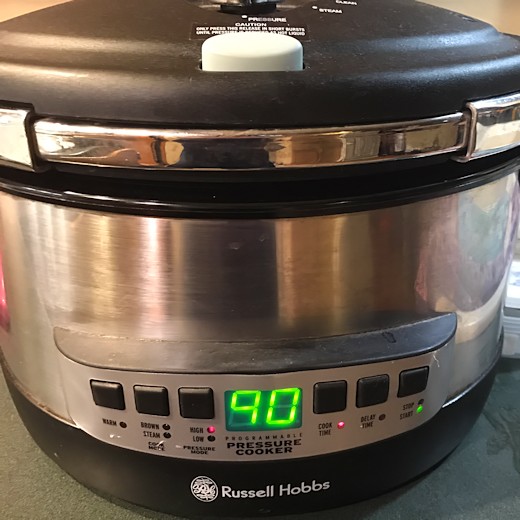 Eventually I want to get a grinder because the bones lose nutrients in the pressure cooker, but for now it’s better than nothing. 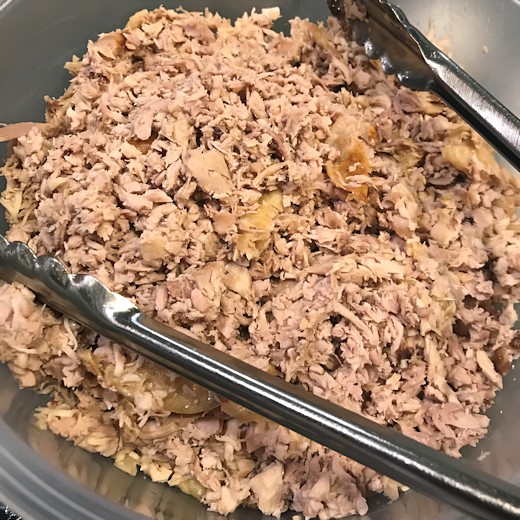 While the pressure cooker was doing its thing the chicken finished baking. The previously deboned meat, with skin and fat, was shredded in the food processor and set aside. 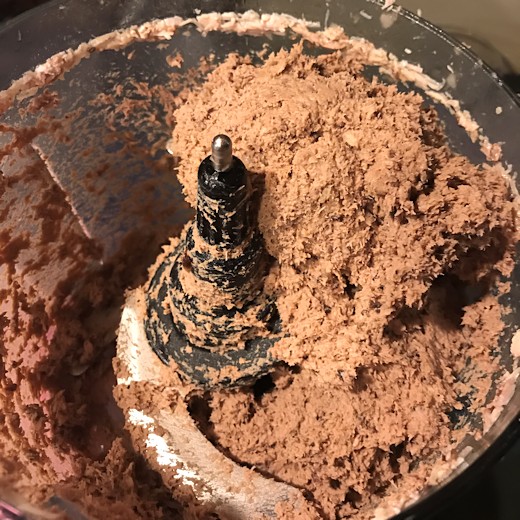 When the other thighs were cool enough to handle I deboned them and tossed everything but the bones into the food processor, added the liver, then pureed. Paté anyone? 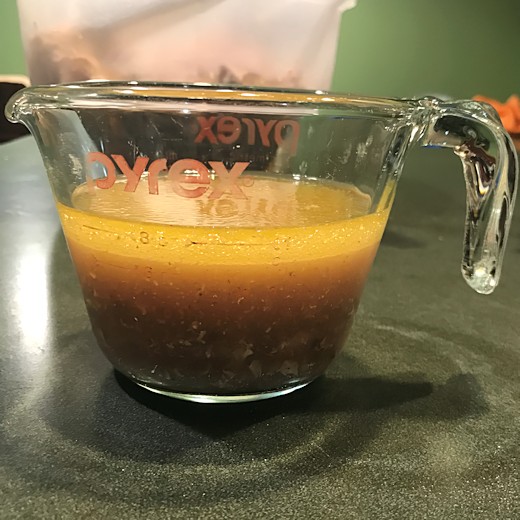 The drippings provide fat, liquid, and nutrition so they’ll be included in the pat&eacute. But first I add the supplements so they can start to dissolve. 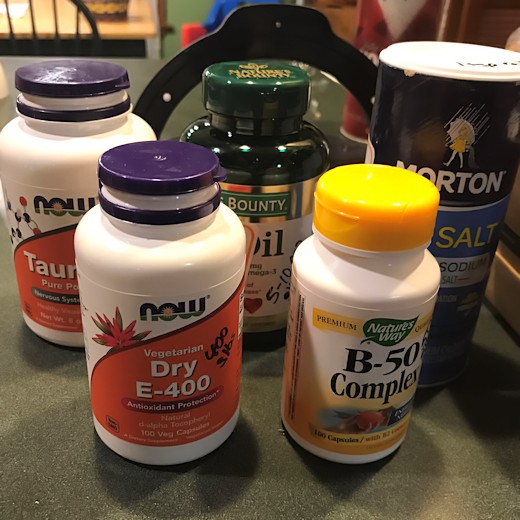 Chicken thighs and liver don’t provide the same nutrients as the little critters cats eat in the wild so supplements need to be added.

Dr. Pierson links to the brands she uses, but users on the Cat Site forums said brand doesn’t matter so I got the cheapest ones I could find on Amazon. 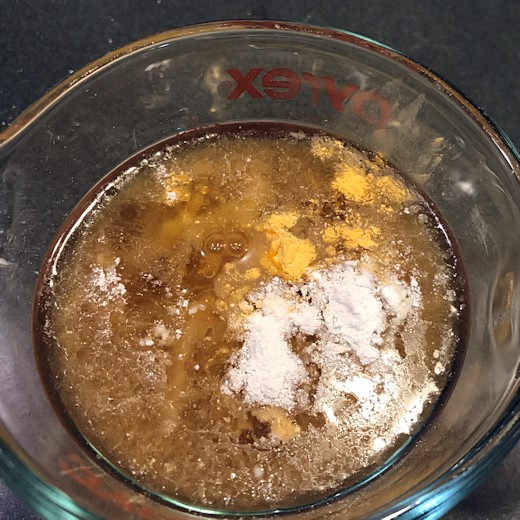 The dry capsules were opened and dumped into the drippings; the others were just dropped in. 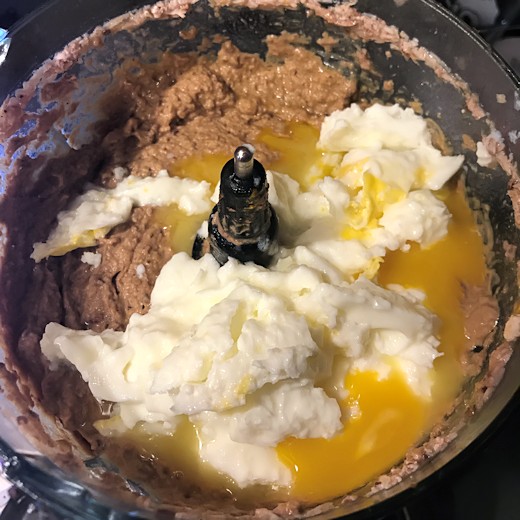 Eggs are optional in Dr. Pierson’s recipe so I put in half of what’s listed in the recipe.

Apparently raw egg whites aren’t good for cats MAJOR guilt because all Kippy would eat toward the end was mixed up raw eggs but raw yolks are so I separated them and microwaved the whites. 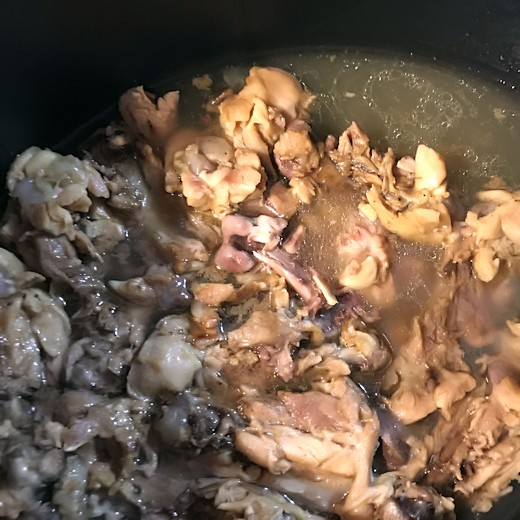 FINALLY the bones are done! It smells like chicken stew in my house – yum! 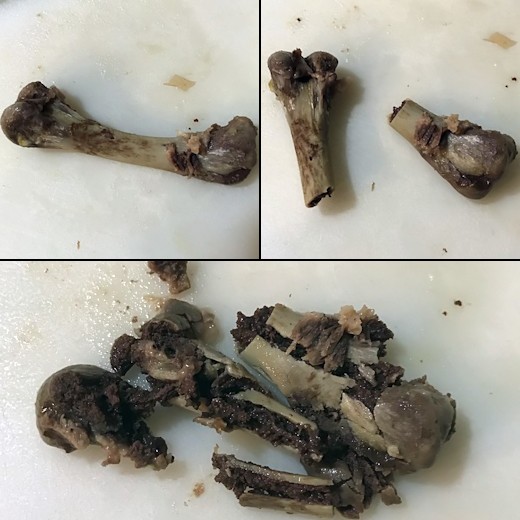 The first time I made homemade cat food I was totally disappointed when I opened the pressure cooker. It didn’t work, they look the same.” But I was wrong – the bones looked the same and felt hard to the touch, but crumbled easily. I did all of this with my bare hands, and they’ll be fine after a whirl in the food processor. 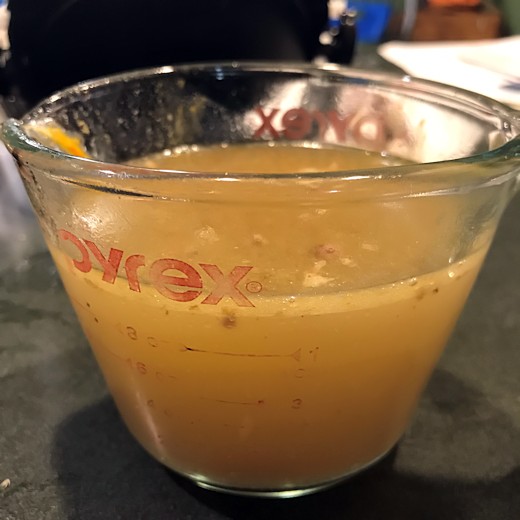 The liquid from the pressure cooker needs to be included too, so none of those nutrients are lost. 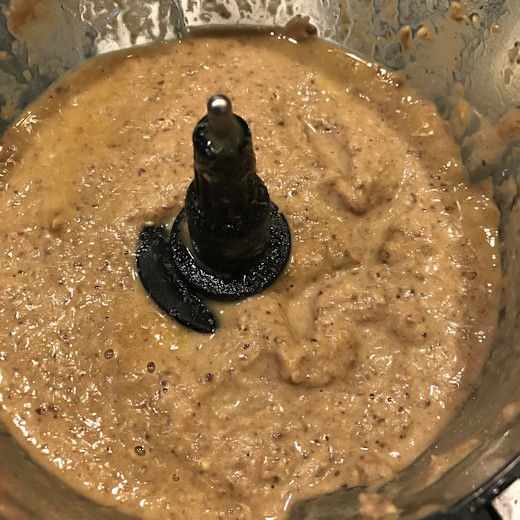 Here’s our paté after the eggs, dripping with supplements, and bones with liquid were whirred up.

With this batch I was lazy and used the food processor for the paté instead of the blender, and learned that the blender does a better job liquifying the bones. There were some tiny bone fragments in the mixture after food processing, but they were soft enough to break with my fingernail so I didn’t think they’d be a problem for the cats. 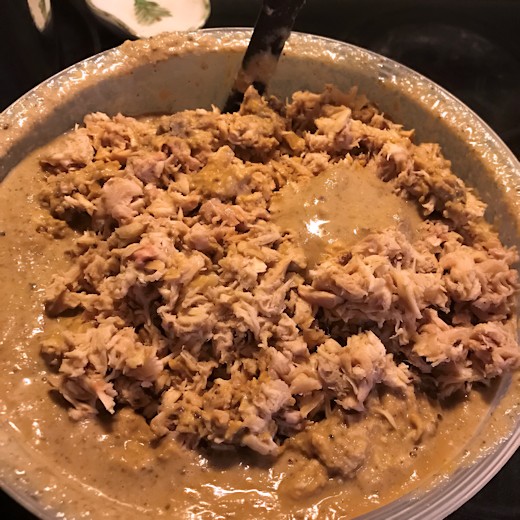 Almost done! I stirred the “paté” – now tomato-soup consistency – into the previously shredded meat and added enough water to meet the recipe’s minimum. 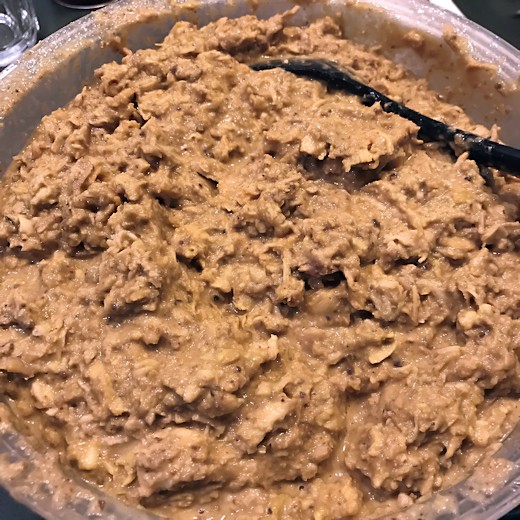 Voilá, it’s done! It looks and smells like chicken and gravy, although I didn’t taste it. It is edible for humans, but I personally couldn’t get past the idea of liquified bones and chicken livers. 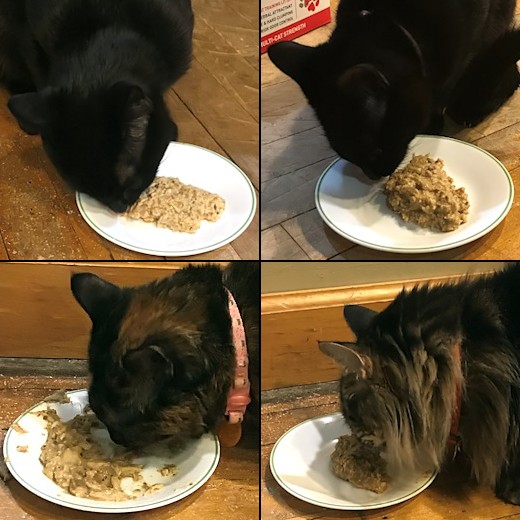 All of the cats approve though! Even Snickers, who’s pickier than a two year old and will only eat my homemade cat food if it’s just-made, sprinkled with freeze dried salmon, or has been sitting out for a while. There’s always one Problem Child, right? 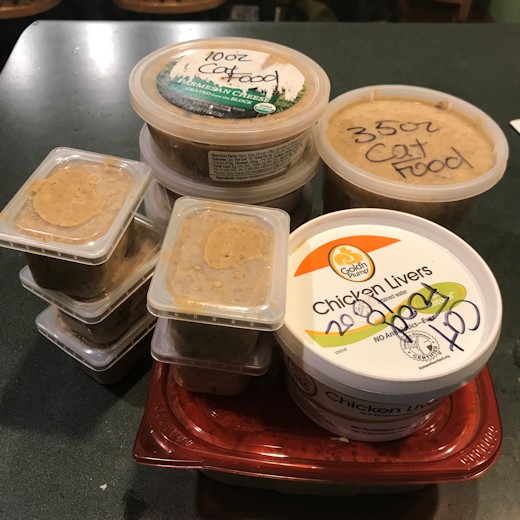 How much did it make? I ended up with about 9 lbs of food, which will barely last a full week.

I’m writing this exactly one week later and there’s just enough food left for “supper.” Don’t worry – the thighs and liver for tonight’s batch are already cooked so the new batch will be done in time for “bedtime snack.”

So what do you think? Would you ever try making homemade cat food?