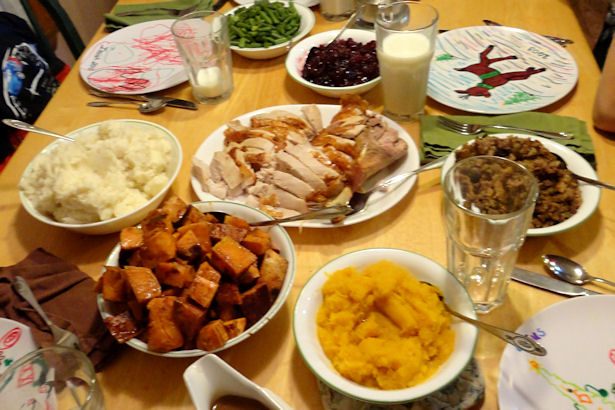 Don’t get me wrong – we love going to Ike and Elle’s place for “regular” aka “First” Thanksgiving every year. Ike roasts a wonderful traditional turkey, Elle whips up her special non-diet mashed potatoes and gravy, and they also have ham, shrimp, rolls, beverages, and a dessert or two.

Dad always brings several bottles of wine it’s not a family get-together if Dad doesn’t open at least one bottle of wine and Mom brings great-grandma’s no-fail corn custard, traditional green bean casserole – both with and without onions so everyone will be happy – and whatever dessert or salad she’s decided to test on us. So far she hasn’t followed in her mother’s footsteps and brought Jello with weird stuff – carrots, celery, cranberries, pecans, etc – in it. So far…

We’re in charge of bringing the things that no one else in the family besides us and my Dad likes: sweet potatoes, squash, and stuffing. We also bring drunken cranberries, homemade macaroni and cheese a Southern tradition Jay adopted when he lived in Savannah, and several pumpkin, cherry, and apple pies. But now that our older two children are married we passed some of our duties to them: College Boy and Irish Girl took over Apple Pie duty, and Princess and Cowboy took over Mac ‘n’ Cheese and Pumpkin Pie duties. I’m thinking that by the time all six are married Teacher and I won’t have to make anything!

Anyway, as much as we love First Thanksgiving at Ike and Elle’s, there were two problems: 1. We always had lots of “fixins” leftover without any turkey to go with them, and 2. Teacher wanted to try out different turkey roasting recipes and techniques but didn’t want to take the turkey-making away from Ike.

Then, a couple of years ago Teacher wanted to try brining a turkey, so he made one the Sunday right after Thanksgiving. I suggested we reheated the leftover “fixins” so they’d get eaten up, and the wonderful tradition of Second Thanksgiving was born!

We’ve eagerly looked forward to, and happily celebrated, Second Thanksgiving every year since.

What about you – does your family celebrate Second Thanksgiving? What do you do with all your Thanksgiving Dinner leftovers?

P.S. Recipes will be posted as quickly as I can edit the photos, so keep your eyes peeled. I promise you won’t want to miss them; they’re so good you’ll be inspired to plan a Second Thanksgiving of your own – right away!