And the Tears Flow 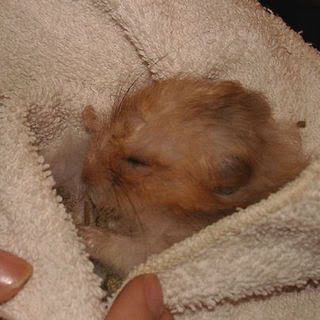 I sit with tears welling in my eyes, typing one-handed. My other hand cradles Marshmallow close against my chest. He’s wrapped in a washcloth and his little head pokes out of the opening, eyes closed tightly. I stroke his soft fur gently, “We love you, Marshmallow” I whisper.

My habit has always been to check on him whenever I was in the girls’ room, especially at bedtime to make sure his cage was secure so he wouldn’t get out while we were sleeping. Over the past week I’ve been watching him more closely. He’s been sleeping more and more, then yeserday I found him leaning oddly in his food dish – as if he was too tired to hold himself up. He’s almost three years old – that’s very old for an animal with a two-year life expectancy.

Tonight when I looked in he was headfirst in his food dish, with one little paw stuck on the edge, and I couldn’t tell if he was breathing or not. I called Princess up right away – she needed to be here for him, and for her own sake. She was afraid to touch him at first, but I encouraged her to take him out of the cage. “He’s not going to die!” she insisted as she stood looking at him, the tears flowing down her face. We saw tiny, shallow breaths and knew that he wasn’t gone yet.

We called the boys to come in and say goodbye to him. Little Guy, of course, didn’t understand what was going on. Z-Man understood a little more, but wasn’t terribly interested. Jo-Bear and Angel Face both stroked Marshmallow’s back, crying. I got a washcloth and Teacher took Marshmallow out of the food dish so I could wrap him up. Princess cradled him, crying and stroking his head. I took a couple of photos while he was looking so peaceful. After a little while I tucked the younger ones in bed and Princess took Marshmallow with her to do her homework.

I checked on her a little while ago, and she asked me to hold him because she wasn’t getting much done. So I sit here, cuddling little Marshmallow, feeling him breathe under my hand. My heart is breaking for my daughter who’s losing the pet she loved so much, and for little Marsh too.

I’m not getting any work done tonight, but I think everyone will understand.