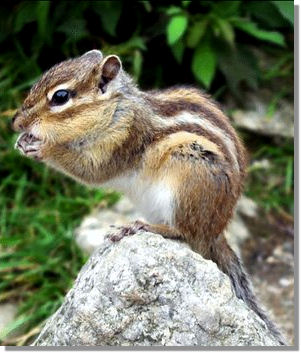 The next morning I was relieved to wake up and see that the cats hadn’t killed the chipmunk and left it on our bed as a present in the middle of the night. Kippy, Murphy and Buddy were still hanging out in the kitchen, sniffing at the opening under the cupboard. I wasn’t sure if that meant they’d gotten the chipmunk and were keeping an eye on things in case another one appeared, or if he was still in there. After not hearing anything from him all day I began to worry that he’d died under there and was going to stink in a couple of days. Dead chipmunk stink is NOT something I want – especially in the kitchen!

Saturday dawned without any further chipmunk episodes and the cats seemed to lose interest in the cupboard so I began to hope that he was gone and we could put the whole experience behind us. Unfortunately we weren’t that lucky.

Princess had been accepted to St. Norbert College (aka SNC) over the summer and started life as a commuter college student in August. Since it was SNC’s Parent’s Weekend and there were a ton of family activities we all spent the day St. Norbert’s. We finally got home late in the afternoon, dropped the big kids off at home, then Teacher and I took the little boys to find something for supper at the grocery store.

Coming home with the groceries we walked into a scene of utter chaos. Uncle Jay in standing in the middle of the dining room, the cats were all locked away in bathrooms and bedrooms, and Princess met us in the kitchen, talking a mile a minute. “The cats were sniffing by the videos and when I went to look the chipmunk ran out and they were chasing it! I scooped Peanut off the floor and jumped on the chair, and it ran right under us! It ran across Angel Face’s foot too! I called her to come help – and it’s sooooo cute, mama! He was just sitting there in the play room and Laelia was watching him and I tried to open the door to let him out, but he ran the other way! And now he’s somewhere in the basement.”

Since we were at the store, and Grandma and Grandpa didn’t answer the phone, Princess called Uncle Jay for help. They’d locked the cats up, blocked off the doorway between the kitchen and basement stairs, opened the outer door at the top of the basement stairs, and were planning to find the chipmunk and scare it outside. Unfortunately there’s SO much junk in the basement a whole city of chipmunks could hide down there and we’d never find them. No thank you – one is more than enough! We let the cats out and brought them all down to the basement. “Find the chipmunk!” we ordered them. They looked up at us like “What are you talking about??” and sauntered back upstairs.

After dinner Cowboy stopped by with a humane trap from home. Princess had told him the whole story and he wanted to help. Cowboy has hunting in his blood and has hunted everything from bear to ground hogs. We were hoping his experience would help catch the wily chipmunk. Cowboy’s grabbed a flashlight and headed downstairs to see if he could find the chipmunk’s hiding place. Jo-Bear idolizes Cowboy and wasn’t about to be left out so he grabbed a flashlight and headed downstairs too. A short time later Jo-Bear appeared. “Well?” I asked. He shook his head, “Cowboy says there’s so much stuff down there there’s too many places for it to hide.”

Cowboy filled a plastic lid with almonds and added a big heap of peanut butter on top. He baited the trap, then set it outside the most likely hiding place in the basement. We crossed our fingers and waited…