Tumor in the Kitchen

Recently I took some frozen juice concentrate out of the refrigerator to mix up for snack time. The snack was one of the kids’ favorites: apple juice and goldfish crackers. I put it the concentrate into the microwave to defrost, and as I turned away I saw something strange out of the corner of my eye. I looked right, then left, then up, and there it was – a huge tumor growing out of the kitchen ceiling! It was round and about the same size and shape as our large Corelle serving bowls. Actually, it looked like someone had stuck a Corelle serving bowl under the paint. I was dumbfounded and stared at it for a minute. Then I did what any sane almost-40 yr old married woman would do… I called my daddy! 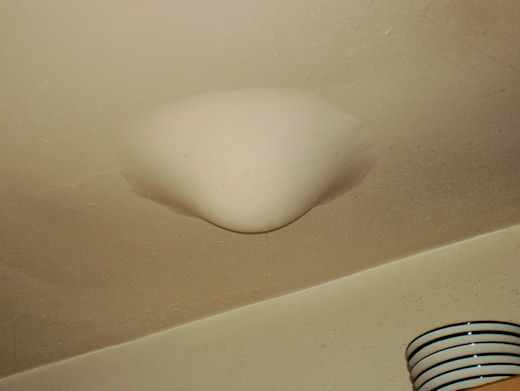 Hi Dad, are you busy? Could you come by for a minute? There’s something weird happening under the paint in the kitchen, it looks like something is leaking somewhere maybe… could you take a peek at it please? Horror washed over me as I realized the tumor was under the upstairs bathroom toilet!

I may not have mentioned this before, but I’m the luckiest woman in the world because my parents live just 2 doors down from us. Not only is it great visiting each other and spending time together, it’s really handy for emergencies like tumors growing out of the kitchen ceiling. About two minutes after I called my Dad was walking in the door. After giving each of the children including the daycare children a big bear hug he went into the kitchen to look at the tumor. He took a quick peek then went upstairs to check out the situation in the bathroom. I was very thankful I’d picked up the piles of dirty socks and wet towels that morning and taken a minute to wipe down the counter and toilet. Mom and Dad’s bathrooms are always spotless so I would have died of embarrassment if Dad had seen our usual pigsty.

There were bumps and scrapes coming from the ceiling as I stirred up the juice, helped the kids wash their hands and got them seated at the table for snack. But it didn’t take Dad long to see what was going on; he was back downstairs before the kids had dished out their crackers.

Dad put a bucket underneath the tumor, then poked it with the pointy head of a Phillips screwdriver. That’s the one with an X. I learned that from my Daddy. Water poured out of the hole into the bucket, then slowed to a steady trickle. 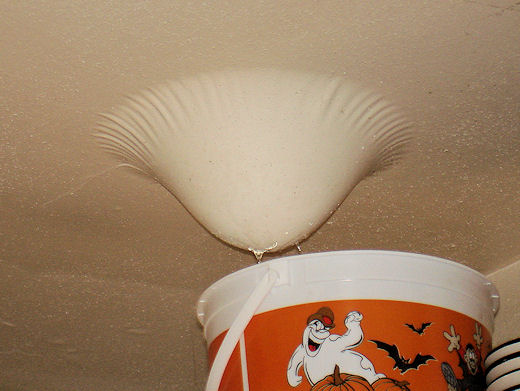 As water filled the bucket, Dad went back upstairs and I kind of lost track of what he was doing. From snack time to 5:00 it’s pretty crazy around herd. There’s snack and handwashing, cleaning up from snack, my kids fresh home from school wanting to talk to me, parents coming to pick up their children, trying to clean up the playroom, getting dinner started, etc. I did keep an eye on the tumor as it slowly shrunk. 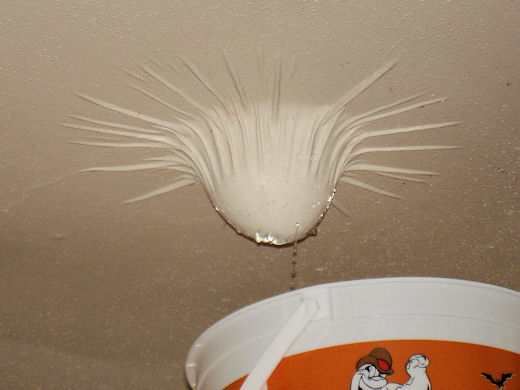 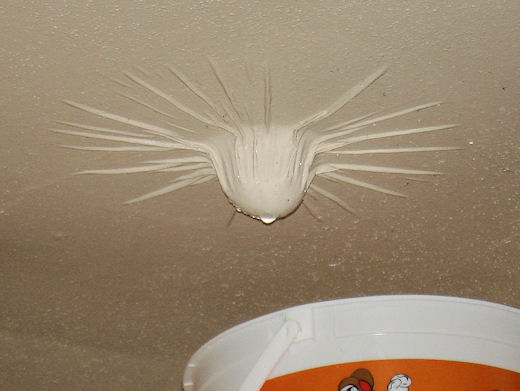 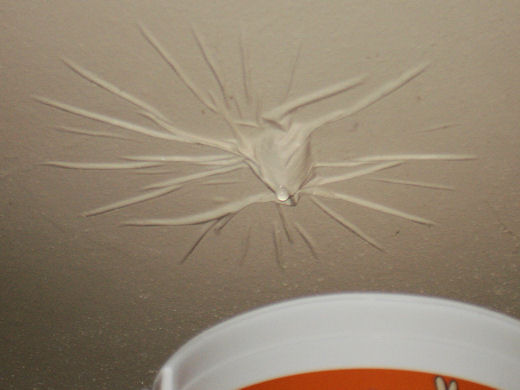 This is what it looks like now. Some day we’ll cut out the bad paint and fix it, but for now the bucket is staying there just in case. 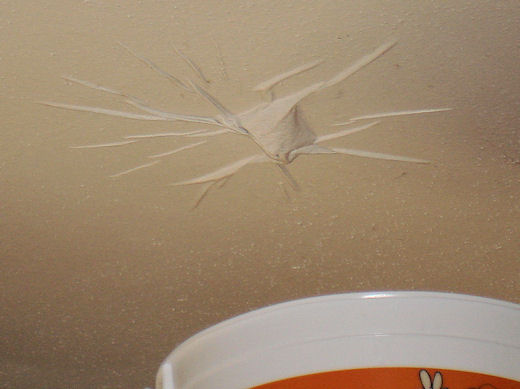 Dad told me what happened… Apparently some screw cracked a while ago and the sticky stuff inside slowly shrunk until it couldn’t keep it from leaking anymore. There was something about the intake valve to, but I don’t remember what that was all about. I just know that Dad replaced the broken parts and put a bucket underneath so I could check for leaks over the next day or two. So far it’s been dry as a bone.

My Dad is the BEST!