We waited until the last minute to wake Little Guy and help him get dressed. “Remember, you get to go to the hospital today!” He nodded but I knew he didn’t comprehend what was in store.

The previous night Teacher and I had tried to explain to him that he was going to have his tonsils taken out but he was too focused on his Lego Ninjagos to pay attention. I wasn’t sure if that was good or not. I didn’t want him scared, but I did want him to go into things knowing a little of what to expect.

We arrived at the hospital and I directed Teacher to the wrong lot which meant we went in the wrong door. Not a good start for the day! After wandering around for a while we were directed to the Registration desk by a nurse who looked too young to have earned her scrubs. 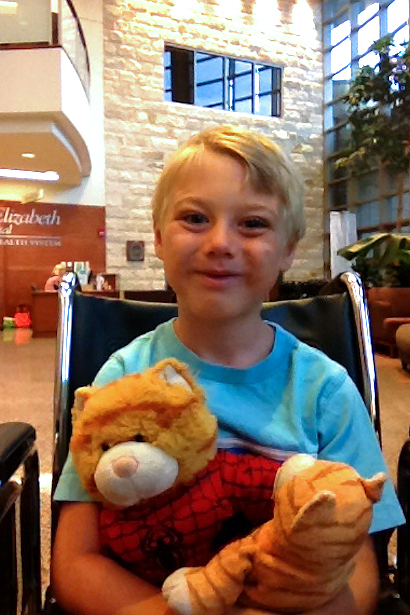 The nurse helped Little Guy get settled in the wheelchair with his best friends, Buddy Kitty aka Spider Cat and Little Buddy Kitty. Teacher pushed him over to a waiting area and we waited for the official guide to take us to the SPA: Surgical Procedure Area. As I sat down I idly thought that “SPA” was a nice name to use in a hospital; it sounded relaxing and not scary at all.

It was a long wait. Teacher and I chatted mindlessly, each of us preoccupied with our worries about the upcoming procedure and the strain of hiding our worries from Little Guy. Finally our guide arrived and we followed her to the SPA. 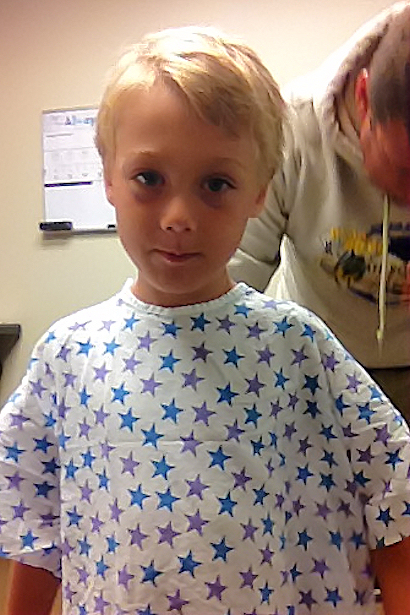 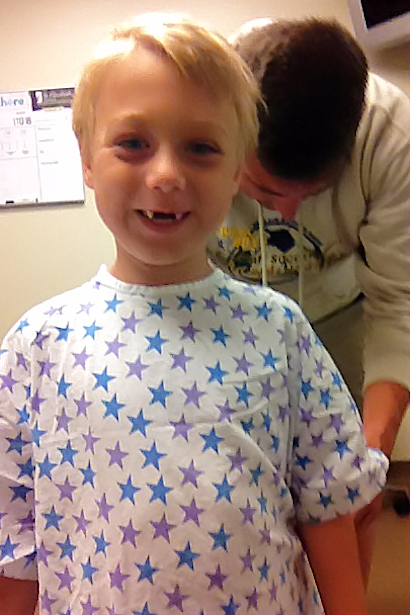 I love that vampire grin, and the lisp it produces is incredibly adorable. Not that I’m biased or anything. 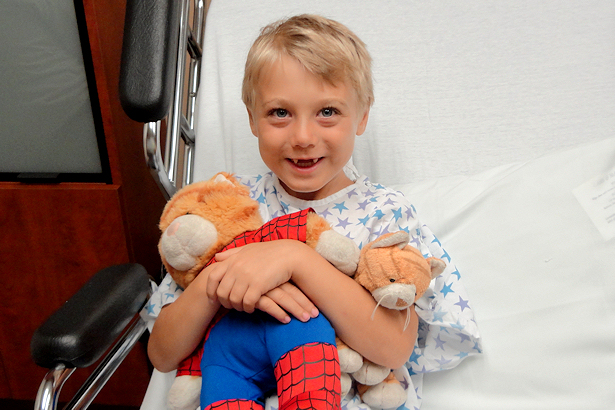 When he was tied into his gown, Little Guy and his best friends got settled on the hospital bed. 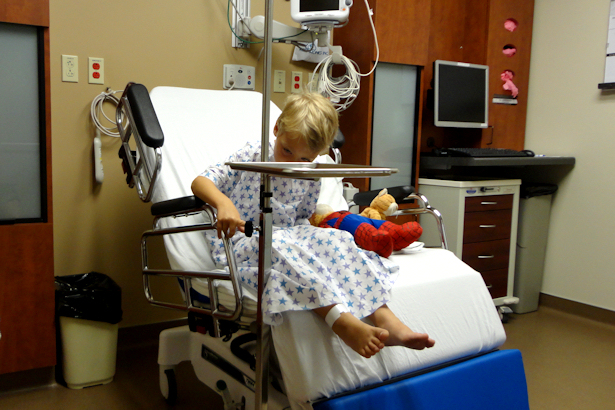 Of course he had to check everything out while we waited. 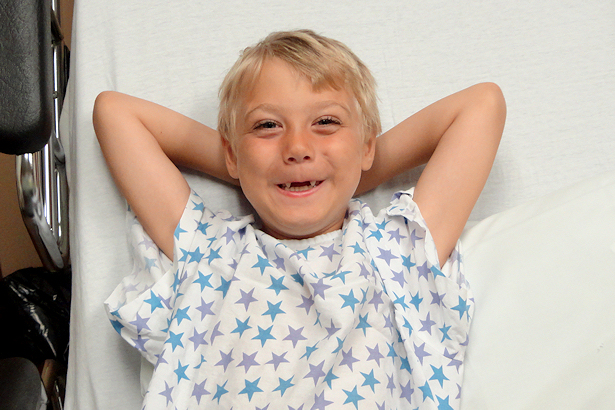 He thought he was hot stuff, sitting in a hospital bed. I tried not to think about what he was in for.

Soon a parade of medical personnel began. There was the nurse who wrote our names on the white board in our room and explained how to follow Little Guy’s progress on the TV in the corner of the room. There was the anesthesiologist who explained his role in the procedure, and had the nasty task of telling us all the possible dangers and complications. There was the volunteer who stopped by to see if we needed a newspaper or something to drink and said she’d be back after the procedure with a gift for Little Guy. Finally there was the ENT who came to explain the procedure in simple terms and ask if we had any questions.

Wait, I do! No-one ever told me he’d have a breathing tube! That makes it sound so serious. Can we change our minds? Do we really want him to go through this? I took deep breaths and told myself it would be OK. I reminded myself of the apnea I’d noticed one afternoon while Little Guy was sleeping which is what started this whole ball rolling. This will be good for him. It’ll be OK.

In between visitors Little Guy creamed me at Tic Tac Toe.

We were offered something to relax Little Guy so he wouldn’t freak out when they took him away from us. I didn’t want him to have any more medication than necessary but could tell the ENT thought it was a good idea. Since he’s got much more experience with five year olds getting their tonsils out than I do, I agreed.

Little Guy took the liquid but when the taste registered I thought he was going to spew it right back at the nurse who gave it to him. Luckily he didn’t! She gave him a little water to help wash the taste away. Judging by the expression on his face it didn’t help much. 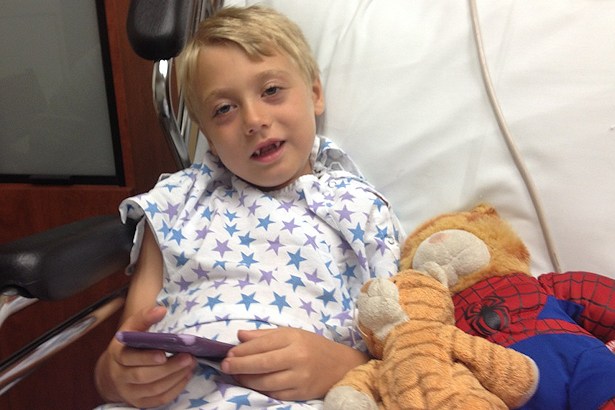 We continued to play Tic Tac Toe as we waited for the medication to take effect. I could tell when it hit him because he spaced out between turns and moved his hand  v e r y  s l o w l y  to place his Xs. Little Guy is always X, and X is always his favorite color; green.

Despite being drugged the little stinker still beat me 3 out of 4 games! 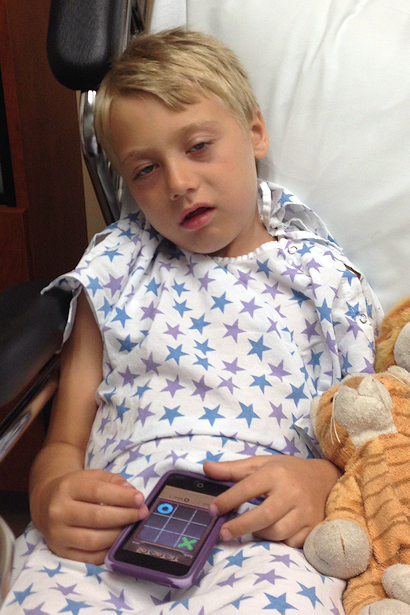 He was really loopy by the time Jack, the anesthesiologist’s nurse, came to take him up to surgery. Jack was great; his larger-than-life personality and jokes put both Little Guy and us more at ease.

The room felt very empty after Little Guy was wheeled out. Teacher played on his iPod and read on the Kindle. I turned the pages of a magazine and tried not to think about the terrible things the anesthesiologist had told us about.

Suddenly the phone rang, making both of us jump about a foot. It was the operating room, calling to let us know that Little Guy was in surgery.

We sipped our drinks.

We held hands, silently comforting and supporting each other.