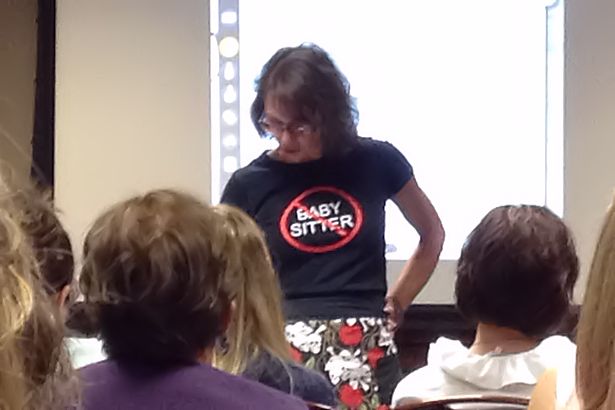 Reflect, not react: Take a moment to see what’s really going on before acting.
When I saw “A” (2 years old) tipping her water bottle to “feed” the baby doll I swallowed my instinctive “‘A’! You’re going to get the dolly all wet! And the water bottles need to stay in the dining room. Bring it back here, please.” Instead I bit my tongue – literally – and watched her for a moment. I noticed that she wasn’t tipping the water bottle far enough for the water to drip out so I didn’t say anything. Unfortunately I later found a water bottle abandoned on its side, soaking the carpet underneath it so I realized I had to uphold my Water Bottles Stay in the Dining Room rule. But I’m glad I took a moment to reflect instead of reacting.

The same thing happened the next day. And the next. And all the time I kept hearing “Give it a week… Give it a week” in the back of my head. It hasn’t been a week yet, but they’re losing interest; today they haven’t emptied them once.

What do you need? Often “misbehavior” is nothing more than a child trying to get a need met.
I can’t think of a particular story to go with this one, but I love it. All week I’ve been asking “What do you need?” both out loud and in my head and it’s really changed the way I look at the children’s behavior.

Child-led = Adults are hands-off Materials are available for the children to use or not use as they wish, without adults prompting or manipulation.
I love this one too because it reinforces what I’ve been doing for years, and I saw it in action so clearly this week. While we were outside “T” (almost 2 years) rolled the football down the slide, ran around to get it, then rolled it again. And again. And again. The other children (all around 2 years old) grabbed balls and stood in line for a chance to roll them down the slide.

Why is this significant to me? Well, because one of my recent lesson plans had “Roll Balls Down Slide” on it but I hadn’t done it with the children. They were always so engaged in their play that I didn’t want to interrupt them, and when I’d rolled the balls down the slide, hoping to interest them, they weren’t interested. But when it was their own idea they were obsessed! They rolled balls down the slide for a good 10-15 minutes straight, which is a long time for two year olds!

Instead of “No” say what they can do: Find ways to redirect “no” behavior into “yes” behavior.
This is a Love and Logic-ism that I learned several years ago and have been trying to use consistently ever since. Instead of “No, you can’t watch TV” say “Yes, you can watch TV when your chores are done.” Or when “C” (2 years) smashed the markers onto his paper I traded him markers for bingo daubers so he could smash to his heart’s content. It’s not hard once you get in the habit.

Don’t get kids ready for next year by depriving them now. Lisa asks “If you knew there would be a famine next year, would you get your child ready by starving them today?” Of course not!
I don’t have a story for this one either but I can’t get it out of my head. How many times do we try to “prepare” children for some future event by depriving them of something today? I never realized how silly that was until Lisa brought up the famine thing. It just makes sense – treat children appropriately for their age today, and continue to treat them appropriately for their as they get older.

It doesn’t do any good in the closet. Materials you never use don’t benefit your program.
Teacher would be the first to say I have a bad habit of “saving” things for a “special occasion.” I do it with pretty much everything – I have a pair of jeans I’ve only worn a handful of times in 2 years, a unopened bag of M&Ms in the cupboard it’s enough to know they’re there; I don’t need to eat them, a drawer of glitter and sequins that I’ve been hoarding for the past 10 years… I know it’s stupid, but in the back of my mind a little voice says “What if they break it? What if they use it up? What if you can’t replace it?” I know – it’s stupid! If they break it we’ll fix it. If they use it up we’ll get more. If we can’t fix it or get more we’ll get something else. It’s just stuff, right? Time to use some of that stuff up!

Lots to think about… And practice until it’s second-nature.