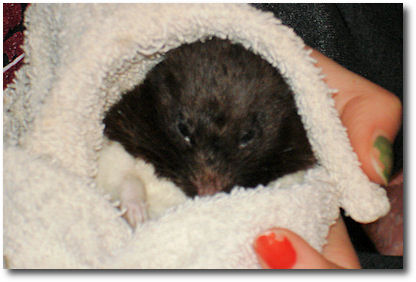 We had a tragedy over the weekend – poor little Oreo died suddenly Friday night. We had “adopted” Oreo for Princess after her much-loved Marshmallow died of old age, and have only had him for about six months. Princess had looked forward to Oreo living as long as Marshmallow had so he could be her “baby” until she went off to college in about a year and a half.

We’re not sure what happened to Oreo. Thursday night he was bright-eyed and active when I put his wheel back up in his cage and started running on it immediately. I thought that was really cool because I’d been trying to catch him running on it for months but he’d hear me creeping up on him and get off the wheel before I came close enough to see.

Friday morning it was dark and I was tired when I woke the girls up for school. Sometimes I peek in the cage while I’m waiting for them to mutter that they’re awake, but that morning I was too tired. Now of course I wish I had checked on him – if I’d realized he was sick I could have taken him to the vet.

That night I did peek at Oreo when I went in to say goodnight to Angel Face. He was curled into a little fluffball all cuddled into his bedding, sound asleep. I tapped on the lid above him and said “Hi Oreo” as I usually do at bedtime. At first when he didn’t move I thought “Wow, he’s really sound asleep” and tapped again. When he didn’t move the second time I became worried and opened the lid to gently nudge him with the tip of my finger. His body was still soft so I knew he wasn’t dead, but he still didn’t move. By this time both Princess and Angel Face were watching me with panicked looks in their big brown eyes. I said “Princess…” as I moved closer to Oreo, looking for signs of breathing. “He’s not dead!” she said emphatically from across the room. Angel Face crawled across her bed to peer at Oreo. “Is he breathing?”

Just then I saw a slight movement of the white fur on his sides. “He’s still breathing, but he doesn’t look good.” I said. “He’s not sick, he can’t be!” Princess flew across the room and gingerly touched Oreo’s back. “He’s really cold” she said. I sent Angel Face for a washcloth and wrapped Oreo in it. He stayed cuddled in a small ball, his front paws near his face. Princess cuddled him against her chest and covered him with her hands.

Jo-Bear and Z-man had heard us talking and came into the room, crowding around Princess and Oreo. “What’s the matter?” Jo-Bear asked. “Oreo’s sick” I answered. “Awww…” Z-Man looked sad as he gently touched Oreo’s head. After a few minutes I shooed them back to bed and took Little Guy downstairs to get ready for bed.

After Little Guy was nursed to sleep, a fact made obvious by his loud snoring, I took him upstairs to his crib and checked on Oreo and Princess on the way back down. Oreo looked a little more lively – his eyes were open and bright and I started thinking maybe he’d be OK after all. Princess had been researching hamsters on the internet and thought maybe he’d caught a cold. According to the site a lethargic hamster should go to the vet, but it was 10pm on a Friday night – not a time I really wanted to visit the vet. Teacher and I were discussing whether I should take Oreo and Princess to the vet right away or if he should take them in the morning when Princess came down the stairs. “Mommy,” she said with fear in her voice, “he’s making a weird noise.” When I saw his eyes shut and his mouth open I knew we had to make the trip to the vet right away.