Sledding with the Boys

I can’t remember the last time there was enough snow to go sledding over Christmas Break, so this year we took advantage of it. Teacher, Uncle Jay, and I braved the Wisconsin cold to take Jo-Bear, Z-Man, and Little Guy sledding. We would have taken the older kids too, but they’d been up most of the night playing computer games with friends so we knew we wouldn’t see them until after noon.

Instead of the legendary hills of Plamann Park we decided to sled the more moderate hill near Teacher’s school. This was Z-Man’s first sledding expedition and we didn’t want to scare him. Besides, I remembered how tall the Plamaan Park hills are, and how much I hurt after climbing back up over and over the last time we sledded there. I was more than happy to sled the smaller hill!

The temperature was a moderate 18 degrees – moderate for a Wisconsin winter that is. There was a brisk breeze on top of the hill that had me curling my fingers inside my gloves and wishing I’d worn a hat. But it was a good hair day and I didn’t want to ruin it. I didn’t end up taking a lot of photos because I needed to take my gloves off to work the camera. Looking at the photos now I wish I hadn’t been such a wimp, and that after sledding down the hill I’d stayed to take some pics of the boys sledding down. Maybe next year, but until then I hope you enjoy these photos… 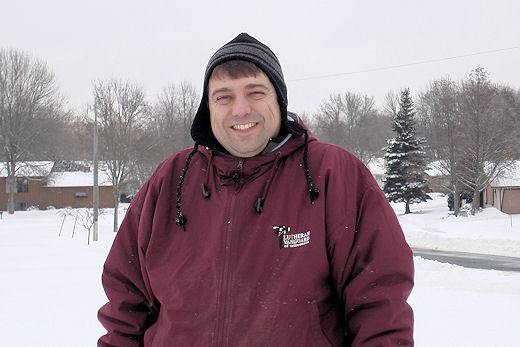 Teacher loves cold, snow, hockey and pretty much everything about winter. Don’tcha love that hat?! It was a Christmas present from me – I figured he needed a crazy hat for recess duty. I think I may get him a crazy hat every Christmas. 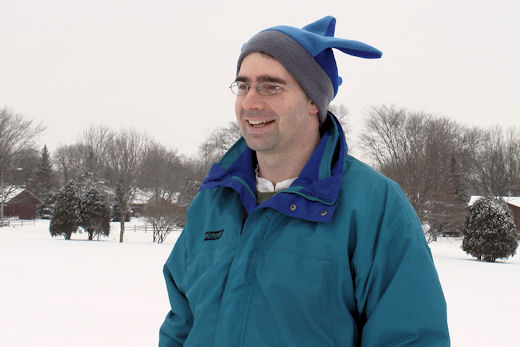 Uncle Jay loves sledding, skiing, shoveling, and just plain winter like Teacher does. I think they’re both nuts since I don’t like being cold. I’d much rather go swimming somewhere sunny. Uncle Jay has a pretty cool hat too, doesn’t he?

Jo-Bear just plain loves being outside, no matter the weather. Yes, I know his coat is filthy. I’m not the one who bought a 9 yr old a white coat – blame his grandma for that. I’d wash it if he’d ever let me have it for a day, but he’s outside every chance he gets so it’s gonna have to wait until spring. 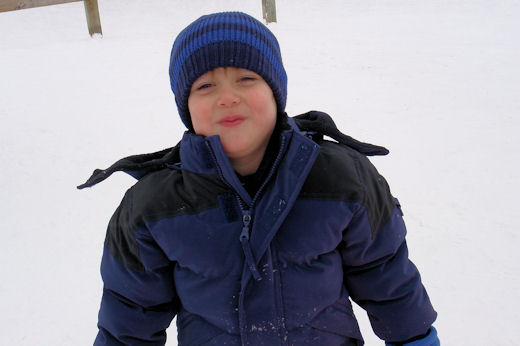 Z-Man is thrilled to go sledding, he’d been begging to go for weeks but our weekends were so packed we didn’t have time until Christmas Break. Isn’t he just adorable? If you look at his little finger you’ll see me wrapped around it. Well, not really, but he does get away with a lot. 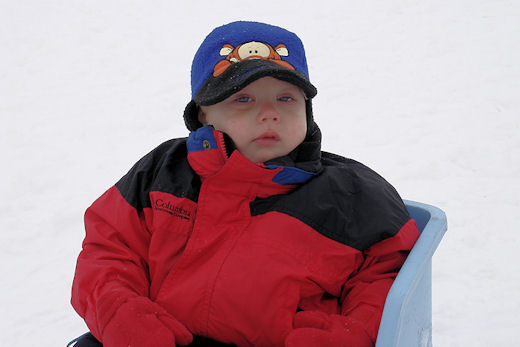 Little Guy hates his coat, despises his hat and absolutely loathes mittens. He isn’t sure why we brought him out here in the middle of the snow and you can see on his face that he doesn’t quite trust us. 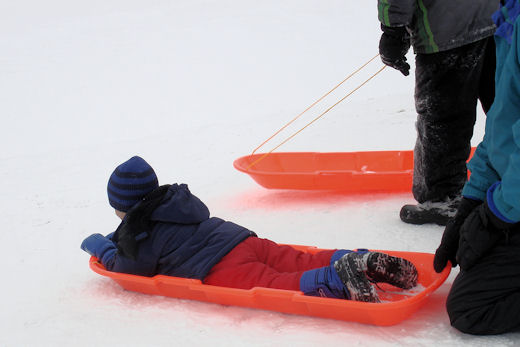 Z-Man gets ready for Uncle Jay to push him off. You can see Jo-Bear in the background about to jump onto his sled too. Z-Man is sometimes a little timid when it comes to new experiences so I was concerned he’d be afraid to go down the hill by himself. But once down with Teacher and he was ready to go solo. 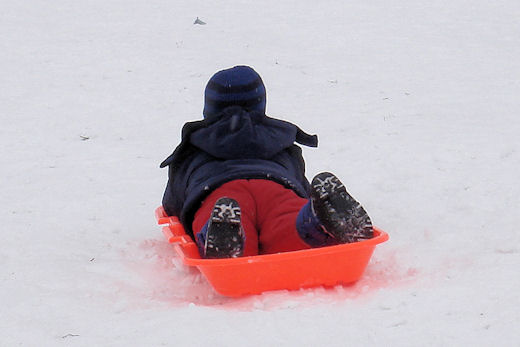 And Z-Man’s off! He laughs so hard each time he goes down that I don’t know how he manages to hold on. 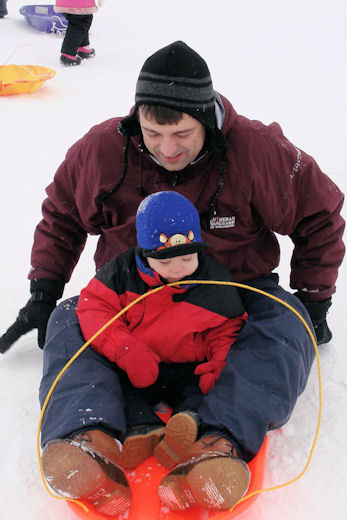 Little Guy was right to be suspicious… I’d been pulling him in circles on the top of the hill as the others went up and down and he seemed to like it. Then Teacher decided that it was time to take Little Guy down the gentle side. Teacher settled Little Guy securely between his legs and grabbed the rope. Little Guy doesn’t know what he’s in for… 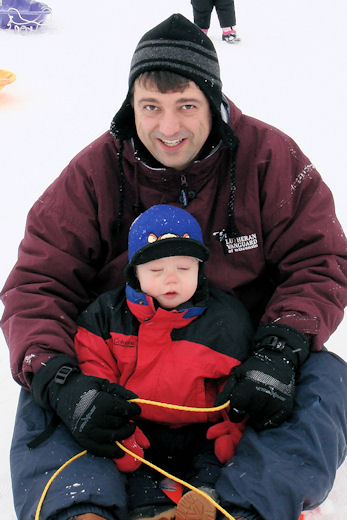 I snapped a quick photo before they took off… then I was so busy watching them go down the hill I forgot to take a photo of it. I know, I’m such a dork. 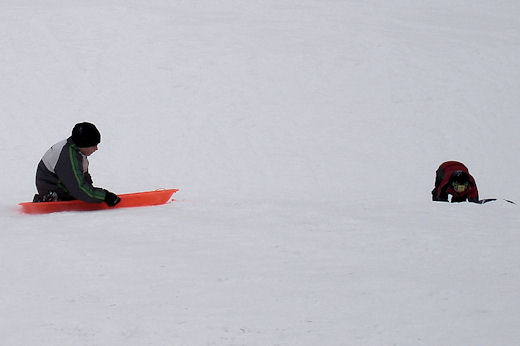 My biggest fear was that they’d wipe out and Little Guy would be terrified of sledding afterwards, but they made it! Jo-Bear went down right after them and had just glided to a stop as Little Guy got out of the sled and tried to stand up in the snow. This was only the second time he’s worn his boots and he hadn’t quite figured out how to walk in them. 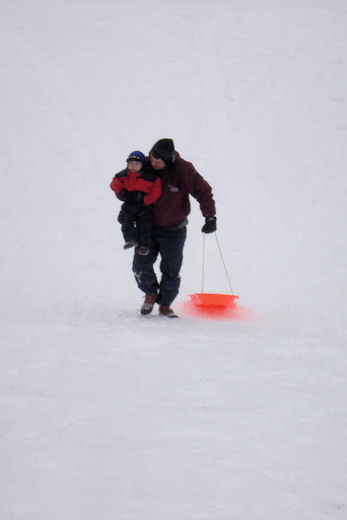 Teacher couldn’t see Little Guy’s face to tell if he was scared, excited, or something else, but he wasn’t screaming at the bottom of the hill, so I think he had a good time. 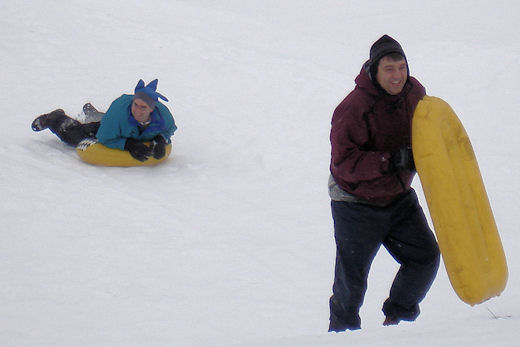 The biggest “kids” had a good time too!