Last year Teacher built me a raised garden and I’d made a fumbling attempt at square foot gardening, but didn’t really know what I was doing.

When gardening season was over I vowed to spend time over the winter researching square foot gardening aka “SFG” and planning my garden for this summer. Wanna bet how far I got?

Winter flew by and spring arrived without my giving a single thought to my garden, so when Teacher offered to help me get the garden ready for planting I scrambled to do some research and put together a plan.

My Googling let me to My Square Foot Garden, and I fell in love at first sight. It’s got everything you need to know about SFG, plus growing-zone specific newsletters to let you know what to do when.

One of the first things we had to figure out was how to prepare the garden. If we were following strict SFG guidelines there wouldn’t be any “dirt” in the garden at all – instead we’d have equal parts peat moss, vermiculite and compost aka Mel’s Mix.

We already had dirt in the garden, but since it would be too much work to dig it all out and figure out where to put it we decided just to add peat moss, vermiculite, compost, and manure to the dirt. 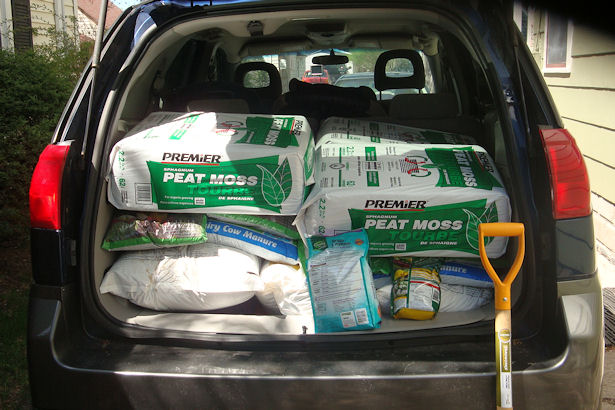 Teacher did the math to figure out how much of everything we needed – it was a lot more than I expected, but I tend to underestimate. We also picked up some iron, fertilizer, and a new gardening fork for me! I know: it’s geeky that I’m excited about a new gardening fork. 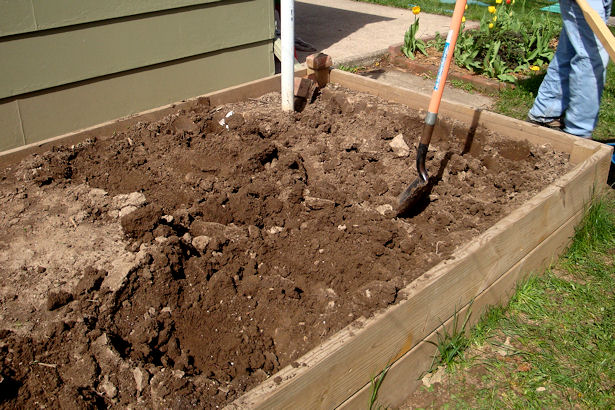 Teacher decided to take some of the dirt out of one end of the garden to make sure there was room for all the stuff we were going to put in. We had to fill in some sunken areas around the egress window anyway, so this took care of two problems with one solution. 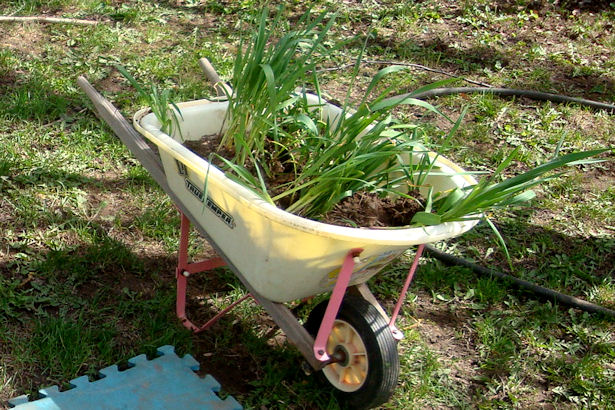 While Teacher was working on one end of the garden I dug up the plants that came up from last year and put them aside for replanting. The garlic fit perfectly in the boys’ wheelbarrow.

I ran out of containers for the strawberries and raspberries so I ended up putting some on one of the foam tiles from the patio. 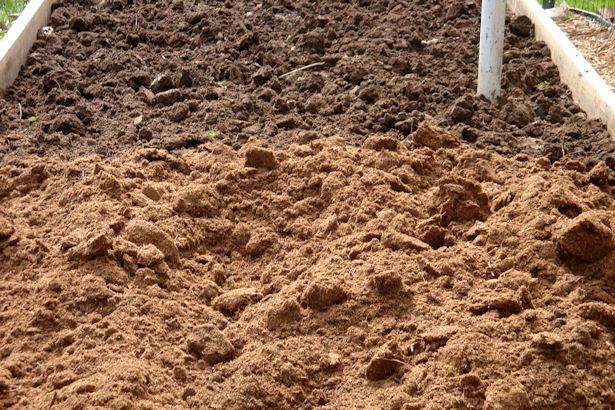 Instead of trying to do the whole garden at once Teacher decided to add everything to one section at a time before moving to the next.

First he dumped the peat moss in. It’s hard to tell from the photos, but it was so windy that I was afraid the peat moss would fly away before we could get it mixed in. 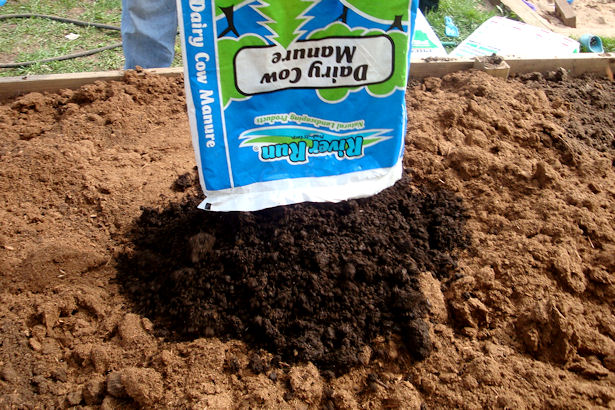 Next the manure was dumped in. Manure from dairy cows, of course; what else would you expect in Wisconsin? 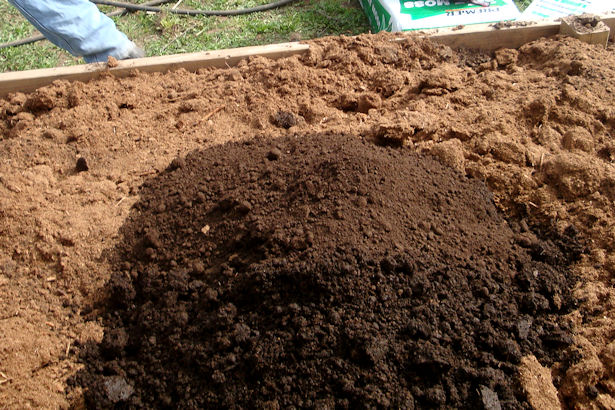 We’d been hoping to use our own compost, but there were still big chunks of stuff in it. Teacher dug out a small shovelful without chunks to put in the garden so at least there was a little of our compost in there. He’s so sweet! 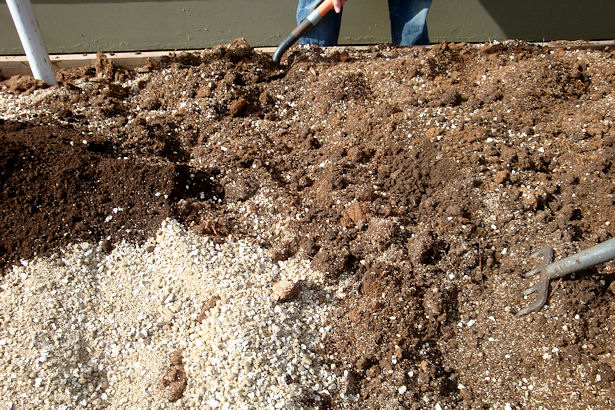 Finally Teacher dumped in the vermiculite and I prinkled fertilizer and iron over the entire area. Teacher moved to the next section; College Boy and I mixed the soil. I won’t say that it was easy work, but the gardening fork made it easier than using a shovel. I always used to rely on a cultivator, but if I’d known how well a gardening fork worked I’d have gotten one years ago! 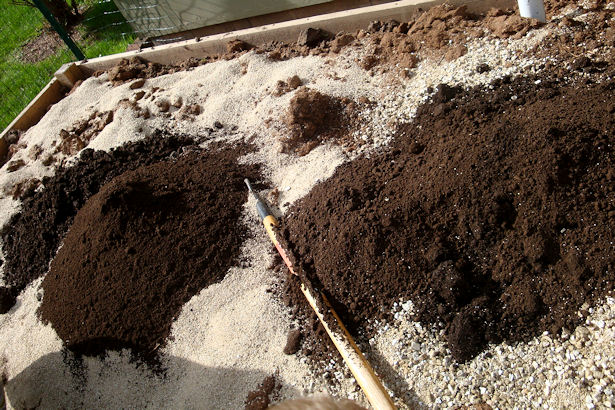 The last section of the garden, finally! Next year we rent a tiller; turning the soil by hand is crazy. 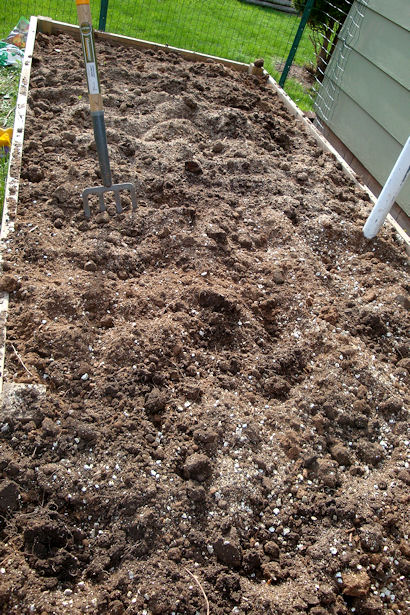 By the time we’d gotten the whole garden turned we were tired and sore, but we weren’t done yet; the plants I’d dug out still needed to be replanted. 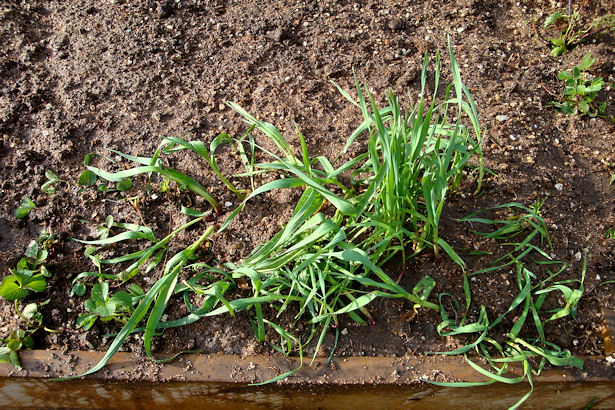 “Hello garlic! Are you happy to be back in the garden?” 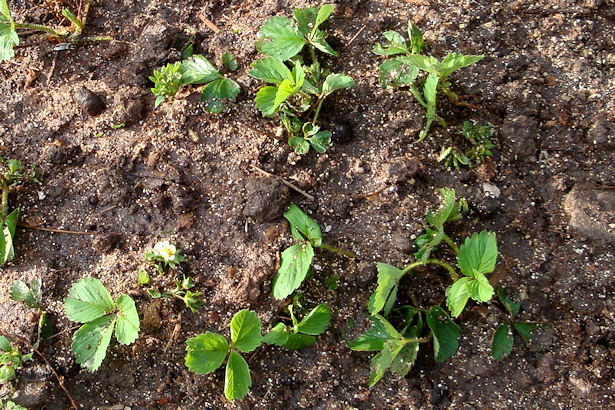 “Hello little strawberries; please bear some fruit even though we dug you up and put you back.”

Finally all the plants were replanted and watered. It had only been three or four hours from the time we came home from Menards to the time the last plant was watered, but we were totally exhausted. It sounds easy to just “turn the soil” but trust me; it’s not. 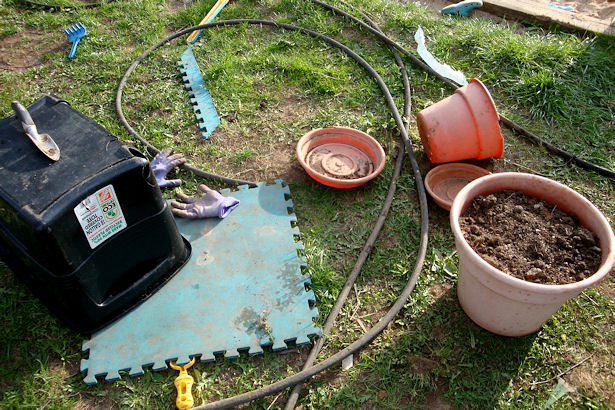 We were so tired and hungry that we didn’t even clean up the yard.

Do you garden? Have you ever tried square foot gardening? What do you like to grow?