Digging in the Dirt

When we bought our house it came with a garden behind the garage. Obviously long neglected, the garden was overrun with weeds and cilantro – so much cilantro that after pulling it all out I couldn’t stand the smell of cilantro for years and years and years. Now it’s one of my favorite herbs – how’s that for ironic?

Since moving into the house I’ve tried to take better care of the garden but have to admit I haven’t always been able to keep up. The first several summers I was obsessed with gardening and spent hours digging in the dirt, but when I was pregnant or nursing Z-Man and Little Guy I wasn’t physically able to spend much time in the garden. Now that the boys are older my interest in gardening has been rekindled.

Teacher knows how much I love digging in the dirt, so he’s always willing to lend a hand – especially when it comes to the physical stuff. Last year he helped add peat moss, milorganite, sand and compost to the soil. We don’t have a tiller so he did it all with a shovel and rake. A double treat for me; it improved the garden and I got to watch him wield that shovel. Mmm-mmm

This year he decided to build me a raised garden. I hadn’t even considered one so I was very surprised – and excited – when he told me. 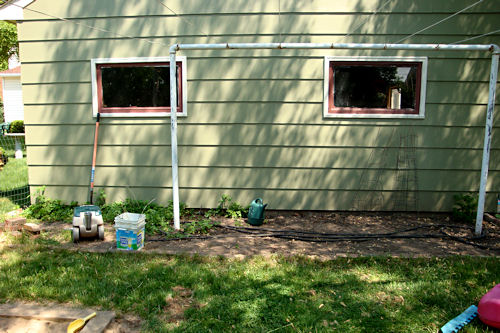 This is more or less what the garden has always looked like except sometimes there’s more veggies and weeds. At one time we had a fence around it but I got tired of leaning or climbing over it so we took it down. It didn’t keep the rabbits out anyway, it just made my life difficult. 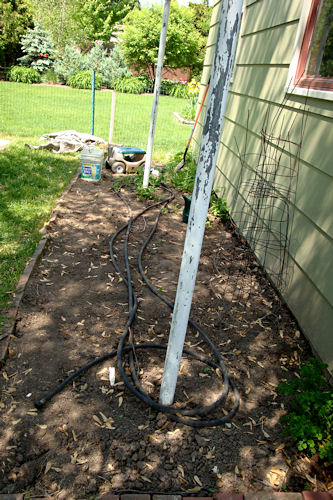 The side view… In the near corner is a parsley plant that keeps coming back year after year I thought parsley wasn’t supposed to come back and on the far end by the shovel are my headstrong grow-wherever-I-want-and-you-can’t-stop-me strawberry and raspberry plants.

Two lots over is my parent’s back yard. It’s like a fairy tale forest, all lush and enclosed, and much better maintained than our child-infested yard. 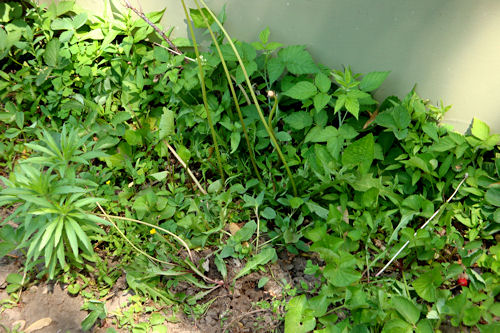 I’d originally planted the strawberries in the front and the raspberries behind them but over the years they’ve intermingled – and invited some weeds to the party. I can’t wait to bring some order to this mess!

Teacher had off the Friday of Memorial Day weekend so he spent most of the day building the garden frame. I had daycare so I couldn’t take photos. The weekend was busy, but Teacher and Uncle Jay found time to get enough dirt to fill 1/4 of the garden. I was able to plant that section right away, and looked forward to having the rest of the dirt delivered a couple of days later.

Unfortunately it started to rain.

It rained so much the delivery guy couldn’t get our dirt cuz it had turned to mud. We needed a couple of sunny days so the dirt could dry out a bit. But it kept raining.

For over two weeks straight it rained, with only one twenty-four hour period without rain. I wonder how Noah ever survived forty days of rain without going stark raving mad.

It would’ve been perfect for the garden, if we’d been able to get the plants in beforehand. 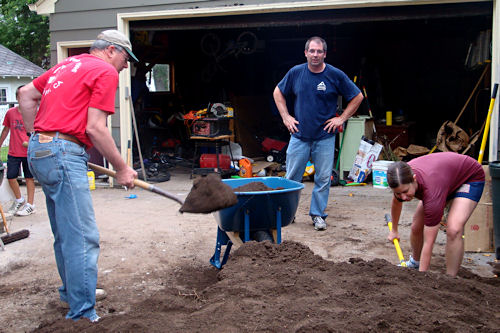 Dad and Uncle Jay’s girlfriend, Dee, filled while Uncle Jay muscled the blue wheelbarrow around to the back of the garage. 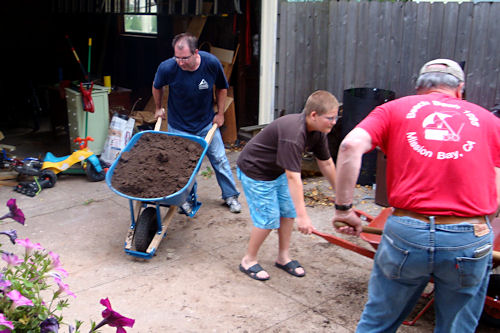 Jo-Bear’s friend E brought his wheelbarrow and did his own share of muscling it around. 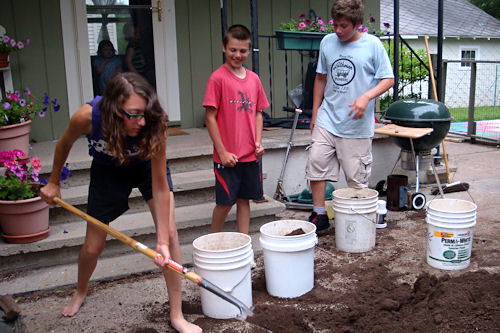 Angel Face did her part filling buckets for Jo-Bear and his friend T to carry back to the garden. 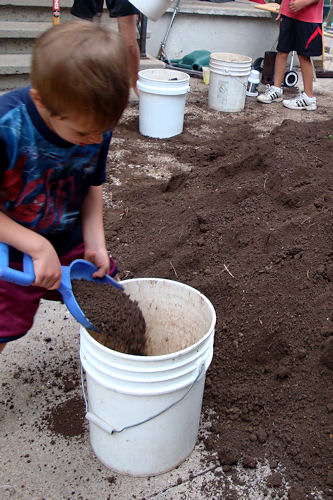 Z-Man got into the act too, filling five-gallon buckets half-way for Jo-Bear and his friends to carry. 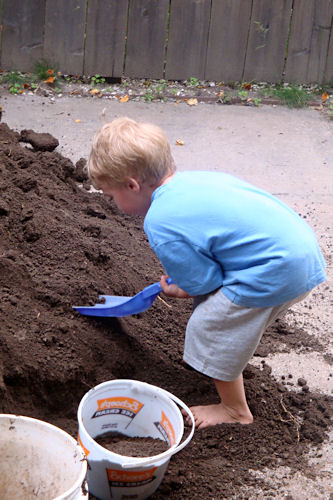 And of course Little Guy had to join into the fun too, filling an ice cream bucket about halfway full… 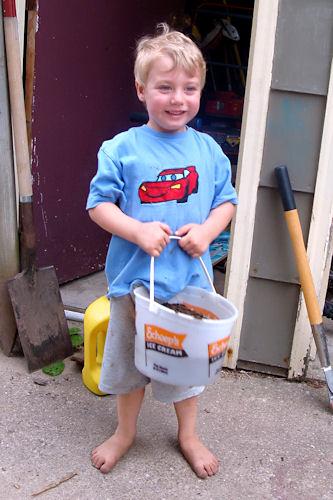 Then carrying it around back to proudly dump into the garden. 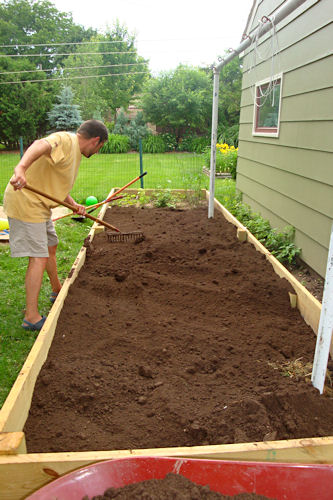 Meanwhile, back in the garden, Teacher spread all the dirt that everyone brought to him. I did this job when we filled the first section and it’s much, much harder than it looks.

As soon as the garden was filled I started planting. It was supposed to rain again at night so I wanted to get the plants in right away. I’d originally wanted to plan out which plants would go where, but with the impending rain and a meeting that night I was happy just to get all the plants in the dirt. It’s a good thing I hurried; just as I finished it started sprinkling – perfect timing! 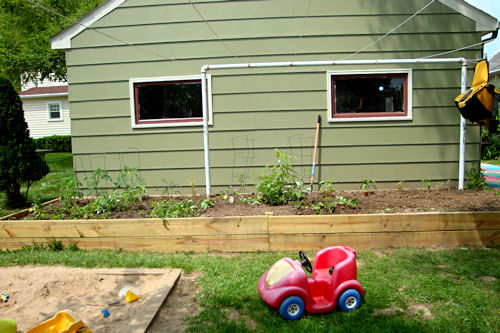 Ta-da! Here’s my raised garden, all done, filled, and planted!

Kindly ignore the toys; such is life with children. 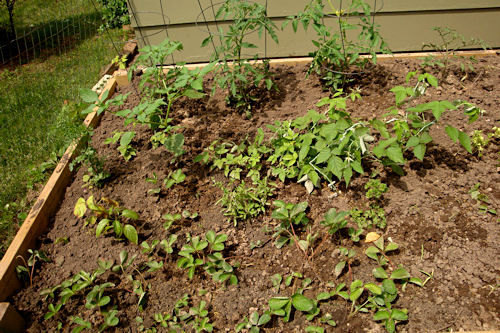 This is the first section that was planted. In the back are tomatoes, in the front are strawberries, and in the middle are cilantro, beans, basil, raspberries, and parsley. I’ve been looking into square foot gardening and did a modified version. I couldn’t wrap my head around a single square foot for tomatoes so I spread them out over several feet. 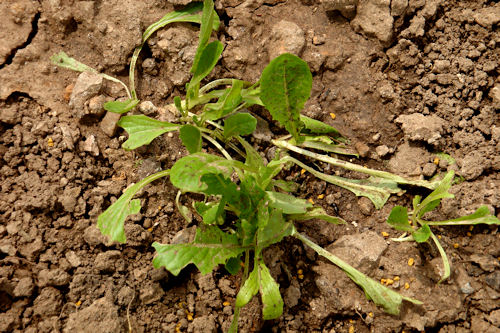 I started lettuce from seeds in a planter during the monsoon, hoping it wouldn’t be too fragile to transplant. When I transplanted I gave them lots and lots and lots of water, and I think they’ll be OK. 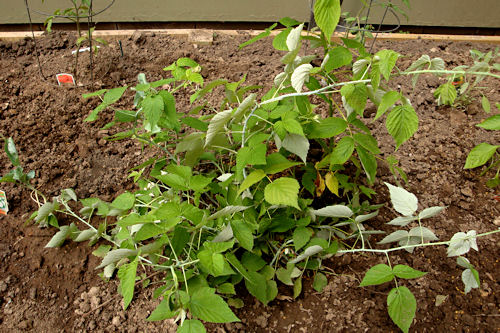 I transplanted the raspberries from where they were growing against the garage. To avoid stressing them too much I tried to keep hunks of dirt around the roots. They seem happy so it must have worked. 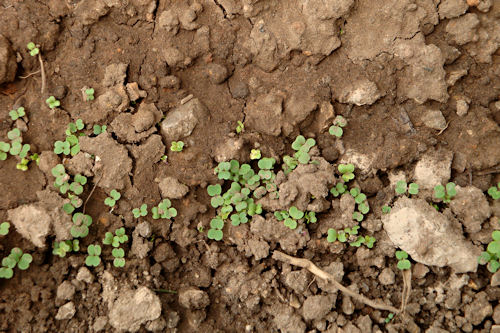 My lettuce seedlings; aren’t they cuuuuuute?! I love watching seedlings grow; it’s so exciting to go out every morning and see how much taller they are, or that they’ve grown another leaf. It’s kind of like watching kids grow, but much faster. 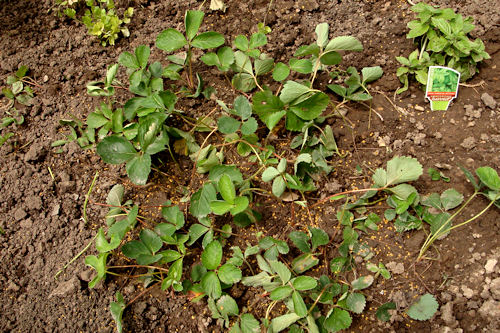 Strawberries; transplanted with hunks of dirt on their roots like the raspberries were. I took a lot of personal satisfaction in pulling the weeds away from my precious berries. Take THAT, you nasty weeds! 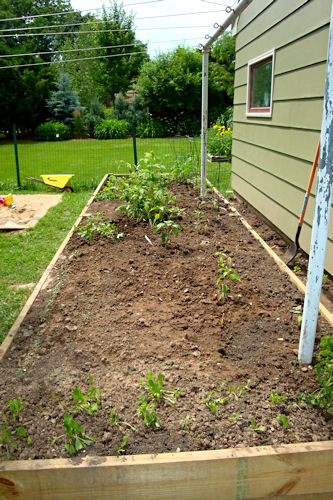 And another view of my new raised garden. The bare areas have been planted with more beans, peas, beets, and onions. Hopefully they’ll have time to produce before the frost, despite their late start. I can’t wait to see and taste all the veggies from our garden this fall.

And I’ve made a diagram of what’s planted where this year, so over the winter I can see where the berries are when I plan next year’s garden.

I love my raised garden SO much!!

What about you – do you garden? What do you like to grow?