Why I’m not a Hairstylist 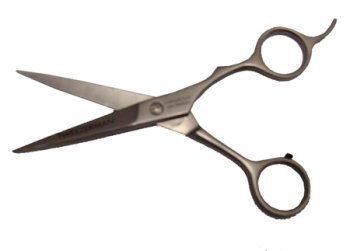 I shouldn’t be allowed to own a scissors. Honestly. Especially one that’s meant to cut hair. There’s nothing but heartbreak down that road.

When I was in the 6th grade I wanted my mom to trim my bangs for the Girls’ Basketball Team pictures the next day. As a preteen I was starting to be interested in my looks. Like most moms, my mom had a lot to do and couldn’t trim my hair right away. So with my usual lack of patience I decided to do it myself – after all, how hard could it be? You know where this is going, don’t you? I soaked my bangs with water and plastered them down to my forehead with my fingers. Then I cut across as straight as I could, right above my eyebrows. As they dried they shrunk up more and more until they were barely noticable. I later learned that when cutting wet hair you need to leave it a little longer than the finished length you want. Wish I had known that then – the Girls’ Basketball team picture is still around as a reminder of my little mistake.

You’d think that after that lesson I’d leave haircutting to the professionals, but I’m just not that smart. The other night when I was getting ready for bed and thinking about my upcoming TV interview, I decided my bangs needed a trim. I hate hair in my eyes and didn’t want to go on camera looking like a sheepdog. So I got out the scissors… You do know what’s coming again, don’t you? I remembered the 6th grade debacle but figured that I’m much older and wiser now so I wouldn’t make the same mistake again. Besides, how hard can trimming bangs be? I’d read in Glamour that the best way to trim your bangs is to twist up small sections and cut off no more than 1/4″. That’s so easy – I can do that! I started sectioning, twisting, and trimming, beginning at my left temple. It was going rather well and I was feeling confident until the section right above my left eye. The scissors slipped and cut 1/2″ off that section, leaving a huge gap in the fringe. *@&#&%^@!!! I’m such an idiot! My stomach flipped and my mind raced frantically trying to figure out how to fix it.

The smart thing would have been to put down the scissors and call my hairstylist friend to repair the damage the next day. But since I’m neither smart nor patient I kept cutting. First I finished the section-twist-cut technique with the rest of my bangs. Then I went back and trimmed the places that were still too long. Then I combed it up and trimmed the longest hairs to create some layers. It almost sounds like I know what I’m doing, doesn’t it? Finally I cut some sections shorter to make it look like I meant to have an uneven look. When I was done my bangs were shorter than I’d planned, but trimmed in a choppy fashion that I hoped would camouflage the hole. It seemed to work, and when I comb my bangs to the left and spray them with ultra-hold hairspray, you can’t even tell that there was a gap. Really, you can’t. Just don’t look at me from that side.

Next time I’ll call my friend Cassie instead of cutting it myself – pinkie swear!