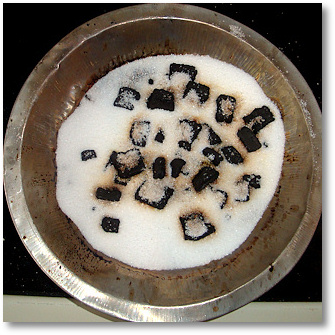 Apparently I wasn’t meant to have croutons on my salad today. I wanted to freshen up the stale ones we had in the cupboard so I put some in a pan under the broiler for a couple of minutes. That would have been perfect except I got busy making the rest of my salad and forgot about them.

About a second before the burnt stench reached me I remembered the croutons and rushed over to rescue them from the oven. But I was too late – the pan was on fire! Blackened nuggets that used to be croutons fed the flames until they were a healthy 4-5″ tall. Yikes! What to do??

I pulled the rack out and looked at the flaming pan, debating my options. Wow, I’m calmer than I’d expect, I wonder if it’ll wear out and I’ll freak.

Meanwhile the boys and Tara (a daycare child) were watching with interest from the table where they were eating their lunch. “Something’s on fire, Amy.” “The smoke alarm is going off, do we have to go outside?” “Is the fire out?” “Can I have some ketchup?” “Why was there a fire?” “The smoke alarm stopped.” “What’s for fruit?” Oh gawd, I hope Tara doesn’t go home and her parents that there was a fire at Amy’s today!

I didn’t forget about them this time… OK, I did, but just for a little bit… When I opened the oven the croutons were dark, dark, dark, DARK brown. Arrrgh! These almost-burnt offerings – the last of the croutons – were tossed into the sink. Now I felt even stupider, was still hungry, and had no croutons for my salad. Waaah!

Then I remembered the garlic toast leftovers in the bread drawer. Hooray, my salad was saved! This time I was super-duper-smart: I put two slices on the oven rack and set the timer for one minute. Who says you can’t teach an old dog a new trick?! Hey, who called me an old dog?!! The garlic toast turned out perfect; nice and toasty, and most important- not burned.

Tomorrow I think I’ll have leftover spaghetti warmed up in the microwave. The nice, safe microwave.