After what seemed like forever a nurse came into the room to tell us that Little Guy was out of surgery. Everything had gone well and he’d be back with us soon. She explained that they keep adults in post-op for about an hour but try to get children back with their parents as soon as possible.

My second-greatest worry – after something terrible happening during surgery – was what would happen when he came home. Our ENT was extremely conservative; his post-op directions included a soft-food-only diet for two whole weeks. He said that in general about 4% of patients have post-op bleeding ie; hemorrhage that requires an emergency return to the hospital, but because of his strict post-op rules he had a much lower percentage of patients with complications.

I was glad to hear that overall his patients fared better than average, but was still terrified that something would happen to make Little Guy start bleeding again. It didn’t help that the ENT told us that the throat doesn’t really form scabs per se; the incisions are covered with mucosa and heal that way. I can handle puke and poop, but I’m not great with blood; especially my kids’ blood. 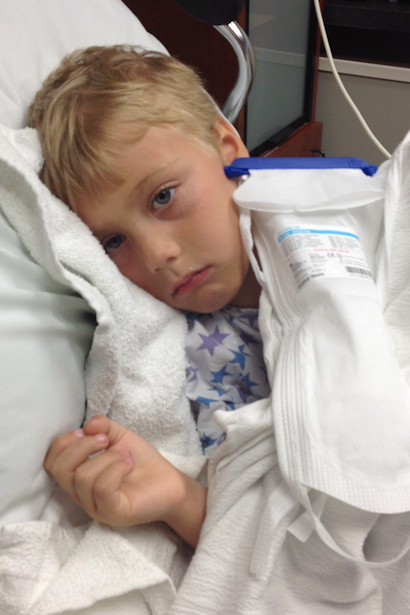 Tears filled my eyes when they brought him back. Waves of gratitude that he was OK, love for my little boy, and major mama-guilt washed over me. He looked so little laying there, and so hurt. I’d done this to him; it was my decision that put him there and made him hurt.

The nurse explained that he still had the IV in his left hand, and they wanted it to stay there for about an hour to make sure he was well-hydrated. If he could keep water down during that hour they’d remove the IV and we could take him home. I would have preferred for them to keep him longer to give his body a little more time to start healing while he was surrounded by medical personnel who knew what they were doing. A couple of days would be nice.

He whimpered as he woke up more and my heart broke at the sound. Teacher and I stood by his bed, and I stroked his back and shoulder gently as he came fully awake. His eyes had barely begun to focus when the volunteer stopped in again with a selection of Beanie Babies and handmade blankets for him to choose from. Valentino, the red and white Beanie Baby bear he chose, was the perfect distraction.

His nurse asked if he wanted a popsicle and he asked for orange. My favorite popsicle flavor; good choice sweetie! 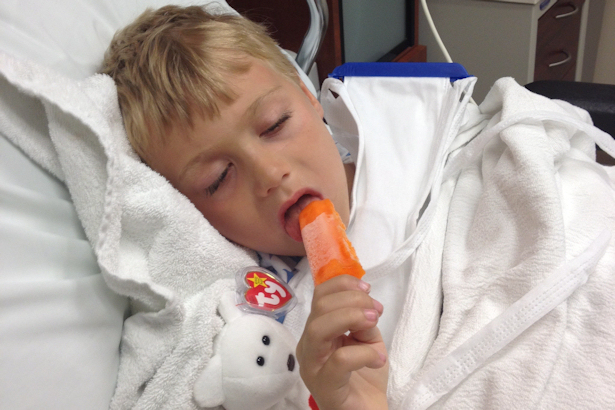 He ate it slowly, grimacing slightly as he swallowed. Every time he grimaced my stomach twisted, but after finishing it he perked up a bit. 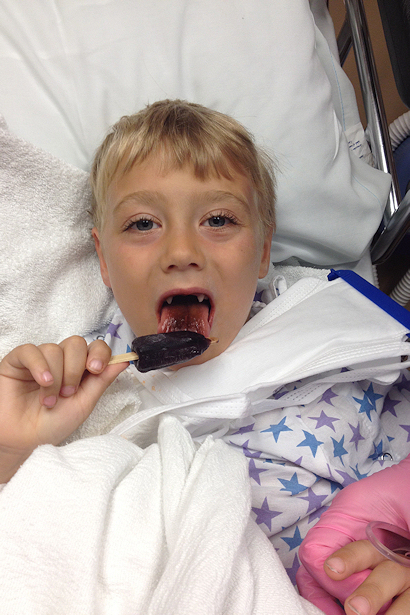 The nurse brought him a purple popsicle the worst popsicle flavor ever and as he rolled to his back to eat it he uncovered his left hand and the IV line. He was very disturbed to see his hand all wrapped up with a tube coming out of it, and started to become agitated. Since his hour was almost up I distracted him while the nurse unwrapped his hand and removed the IV line. You can see the nurse’s pink glove and his little hand in the lower right corner of the picture. 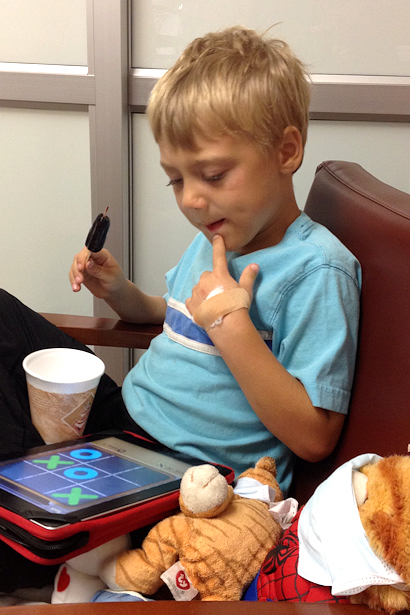 As soon as the IV was out he was ready to get dressed and get out of the hospital bed. Teacher and I helped him because he was still a little unstable from the drug they’d given him before his surgery.

Despite everything he still beat me at Tic Tac Toe – almost every game! 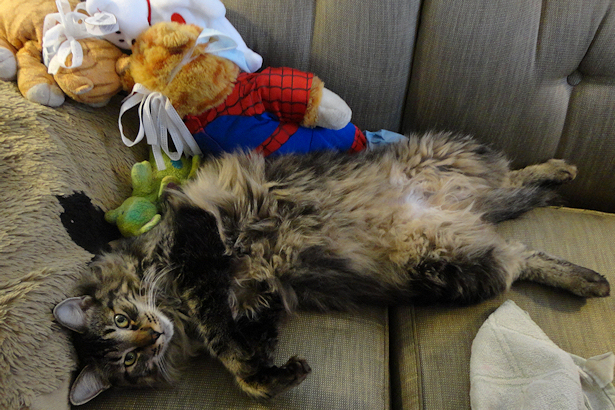 We brought him home and arranged the couch with his Pillow Pet and favorite stuffed animals. Snickers tested it and approved. 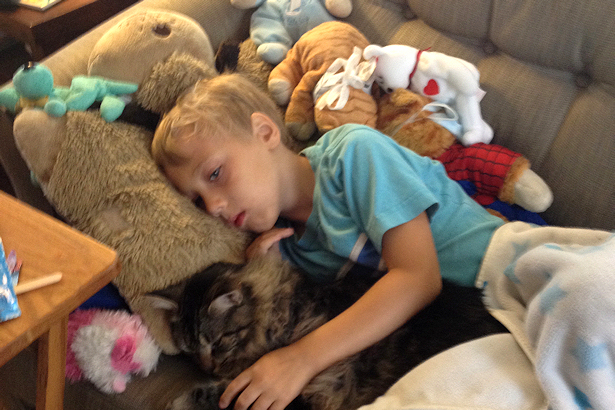 Our cats always seem to know when we’re not feeling well and try to make us feel better. Snickers cuddled and napped by Little Guy while he watched his favorite movie, Cars. I was hoping he’d nap too, but he didn’t. 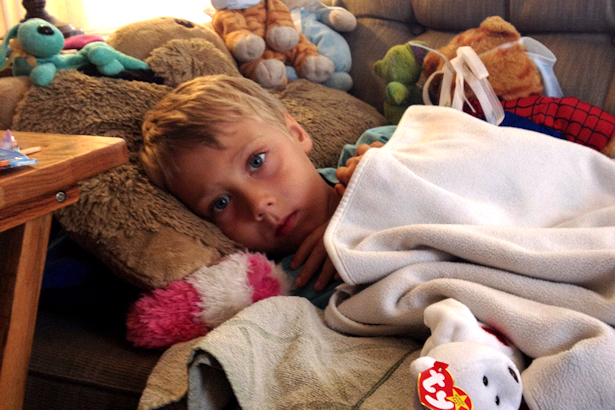 My third worry was how we’d keep him calm and quiet so he could heal. When he had his front teeth pulled he was back to running around like crazy the next day; this time he was supposed to take it easy for two full weeks. So far so good, but I knew it wouldn’t last.

The first two days after his surgery he only ate popsicles and Yo-Kids yogurt. I knew that once he started feeling better it would be hard to keep him on a soft-food-only diet so I asked him “What do you want most when you can eat anything you want?” I felt so guilty for what he’d been through that I would’ve gotten him anything he asked for.

He said “Apples!” which surprised me, even though it shouldn’t have. Little Guy absolutely loves, loves, LOVES apples. Once he ate an entire 3 pound bag of apples in one weekend.

I made him a chart to count down the days until he could eat normal food again and put an apple on the final day, dubbing it “Apple Day.”

Friends had told me that children heal quickly and that he’d bounce back sooner than I expected, and they were right. By the third day I could tell he was feeling better because he didn’t want any more popsicles or yogurt and he started fighting me when it was time to take his Tylenol.

Another piece of advice friends gave me was to keep on top of the medication. So I did, even though it was awful; one of those things you dread but know you have to do anyway. Every time I asked if his throat hurt he said it didn’t, but I could tell from the way he ducked his head when he swallowed that it really did. We started out with liquid Tylenol, but he was suspicious of any liquid because of his experience with the stuff they gave him in the hospital. I didn’t want him to have chewables because I was afraid the sharp edges would scrape his throat, so we battled. Every. Four. Hours.

By the fifth day he was back to his normal mischievous self. Princess came over and played board games with him to help keep him from being too active, but he was definitely tired of laying around watching TV and eating nothing but soft food. I felt bad when his siblings got treats that he couldn’t have so I gave him a paper lunch bag to collect his share of treats in until Apple Day. He decorated with a big red apple and his name.

Time passed slowly. Each night Little Guy put another sticker on his Apple Day chart and counted the number of days he had to wait.

Finally it was Apple Day!

Teacher asked Little Guy what special supper he wanted to celebrate Apple Day and Little Guy chose hot dogs and macaroni ‘n’ cheese. I didn’t have the heart to tell him that he probably could’ve had mac ‘n’ cheese all along! 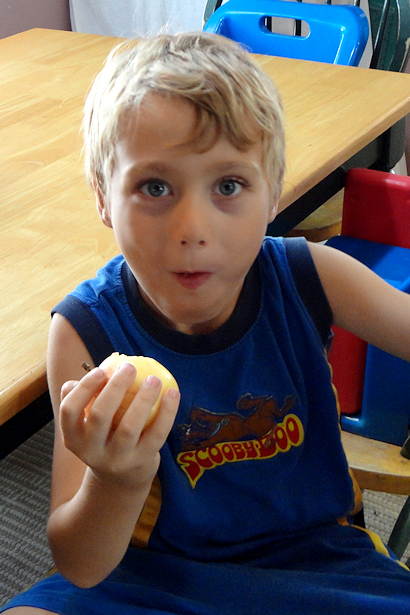 I was surprised that he didn’t grab an apple until the next day; I figure he must’ve been nervous about eating regular food again.

So was it worth it? If I had it to do over again would I make the same decision?

I didn’t like putting him through the trauma and pain, but I do think it was worth it. He’s stopped snoring, which I assume means his apnea is gone, and he’s not breathing exclusively through his mouth anymore.

Hopefully he thinks it’s worth it too.