When I took Little Guy to the dentist I anticipated that he’d have some cavities, but I wasn’t prepared for cavities in all four of his front teeth, plus in the molars on both sides of his mouth.

I felt like the worst mom in the world when I heard the news.

The hygienist tried to figure out why he had so many cavities… Did he brush his teeth regularly? Yes – not obsessively, but more days than not. Did he drink a lot of juice? No, we rarely even have juice in the house. Did he ever go to bed with a bottle? No, he was never on bottles. Was he a mouth breather? Yes – he’s breathed through his mouth and snored since he was a baby. Eureka! The hygienist explained that when teeth dry out they’re more susceptible to cavities.

I still felt like the worst mom in the world.

Because Little Guy is only five our family dentist referred him to Dr. Gonzo at Dental Haven for Children. We’d had Dr. Gonzo work on Princess’s teeth when she was younger, so we knew he was a good choice. Teacher took him to the appointment and filled me in when they got home, “He needs fillings in his molars o each side, and his front four teeth on top pulled.”

What?! Are you serious?

I peppered poor Teacher with questions: Why do they have to be pulled? How will he eat? Will it cause a speech impediment? What about social problems in school? Will the other teeth shift? How much will this cost? Since they’re baby teeth and not bothering him can’t we just leave them?

Teacher explained that Dr. Gonzo had said they could try to save the teeth but there was no guarantee they wouldn’t need to be pulled at a later date. Pulling them would be less trauma for Little Guy in the long run, and would save us money. I hated to admit it, but because our insurance would only cover 1/3 of the cost, we couldn’t ignore the financial side of things.

The next day when Little Guy was at school I called Dental Haven for Children with my list of questions. The person who answered the phone had been assisting Dr. Gonzo the day before so she was familiar with his case. She was very patient, understanding and kind, and answered my questions thoroughly. She agreed that in her opinion pulling the teeth was the best option for Little Guy. She said he’d figure out how to bite very quickly, probably wouldn’t have problems in school because this is the age children start losing teeth, and that often in cases like this the permanent teeth come in more quickly so there shouldn’t be a problem with shifting or his speech. She also explained that if we left them they could affect his permanent teeth; possibly causing them to have cavities when they came in, or worst case scenario; they could abscess, causing blood poisoning and possible death. Eep! By the time I hung up I was feeling a little better about it – as long as I didn’t think about the actual process.

I posted in one of my Facebook groups to get opinions from other mamas and was surprised how many of my friends had been through similar situation with their children. One friend mentioned that I should make sure the dentist didn’t restrain children during procedures – something I hadn’t even considered and was sickened by the thought of. Of course that prompted an immediate phone call to Dental Haven. The person I spoke to reassured me that they never restrain children, and allow parents to be in the room if they like, although they find that children do better if the parents are in the waiting room. Whew!

My friends suggested quite a few other things I may want to check out, which prompted several more calls to Dental Haven. After getting answers to the all my questions I conceded that pulling the teeth probably the best option. I called so often I’m surprised they didn’t start screening their calls to avoid me! We just had to figure out how to pay for it.

Eventually I made the appointment.

All along Teacher and I had been careful not to talk about anything dentist-y in front of Little Guy. We didn’t want to freak him out and make him afraid to go to the dentist. Finally about 3 days before his appointment I casually brought up the subject as Little Guy sat next to me, eating an apple. “Hey, guess what! In a couple of days you get to go to the dentist again!”

He just looked up and said, “I know.”

“Well honey,” I said, “The thing is, your front teeth have too many cavities for the dentist to fix so they have to get pulled out.” Then before he could say anything I continued, “And then you get to put your teeth under your pillow and the Tooth Fairy will come and give you money for them! You might even get FOUR whole DOLLARS! Isn’t that cool?”

Luckily my plan worked and he followed the Tooth Fairy thought instead of the pulling teeth one. He nodded his head, smiling. “Cool!” he said, going back to his apple.

Over the next four days I brought up the subject several more times, adding more information each time while being careful not to scare him.

Finally the big day arrived. I’d asked Teacher to take Little Guy because teeth gross me out, and I knew I’d be a basket case from worry. At 9:00am I crushed his Valium tablet and mixed it with some applesauce, then called him over to take it. I’d told him that he’d have to take medicine before he went so it wasn’t a surprise, but he still wasn’t very happy about it.

He put the spoonful of applesauce into his mouth and started gagging. “Don’t spit it out! Swallow, swallow, swallow… Here’s some water… Swallow…” I panicked that he’d either spit it out or puke it up. We only had 1 pill so if he didn’t keep it down I would be up a creek without a paddle; but he managed to keep it down. Which is better than Princess did the first time she had to have a narcotic before going to the dentist. 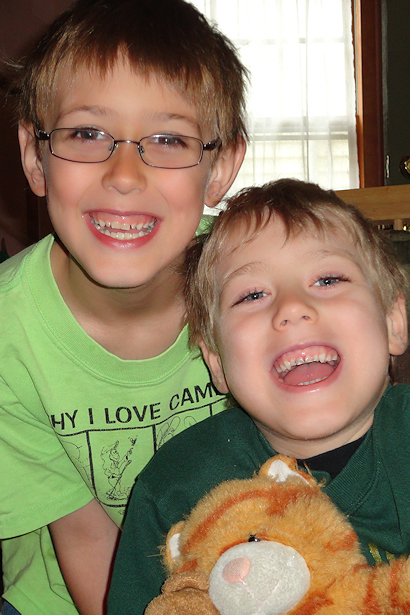 I soon discovered that loopy five year olds are hilarious! Little Guy couldn’t sit straight, much less stand up or walk, and giggled at everything. Z-Man needed to prop him up so I could snap a final picture of Little Guy with teeth. 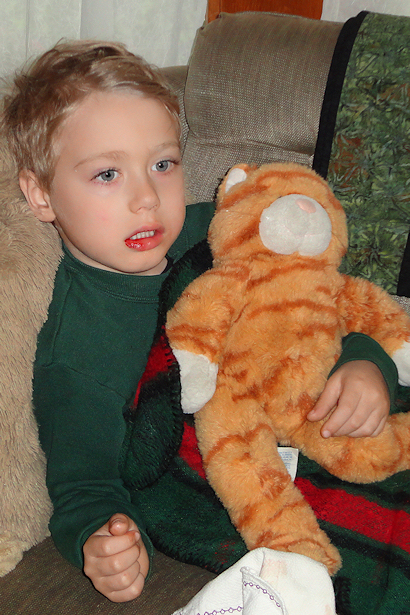 In just over an hour he was back; groggy, numb, and drooly. I gave him some Tylenol and Advil, and settled him on the couch with Buddy Kitty to watch his favorite movie of all time: Cars. 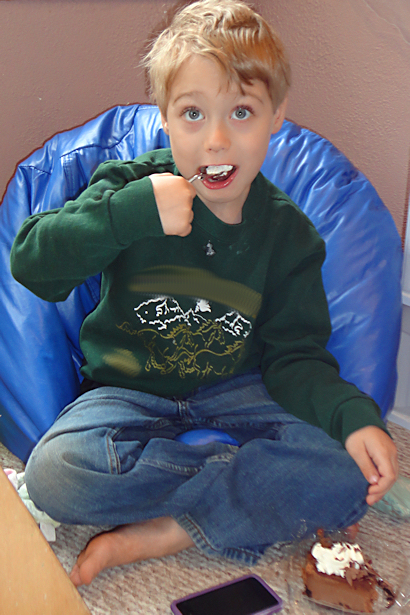 Several hours later the movie had ended, the meds had all worn off, and he was HUNGRY! We’d planned to spoil him with some of his favorite soft foods: macaroni and cheese, blueberry yogurt, chocolate ice cream, and applesauce which he wouldn’t touch then and hasn’t eaten since the drugged spoonful, but Grandma won the prize for spoiling when she sent over a piece of chocolate cheesecake. 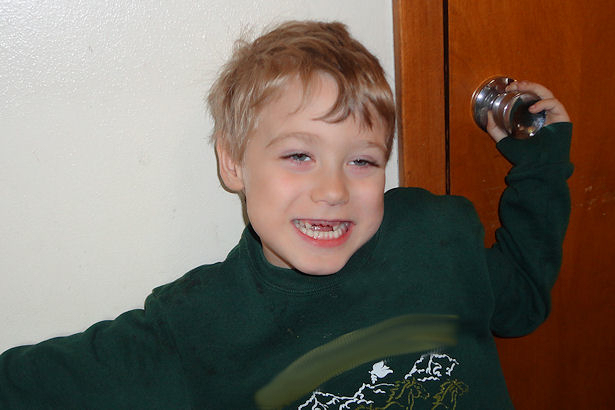 I could tell he was feeling better when he spun himself around the house sliding along the walls and hanging on to doorknobs and furniture, claiming to be “too dizzy to walk.” I wanted him to sit down somewhere and not move so he wouldn’t bump his mouth, but he was feeling too good to play invalid. 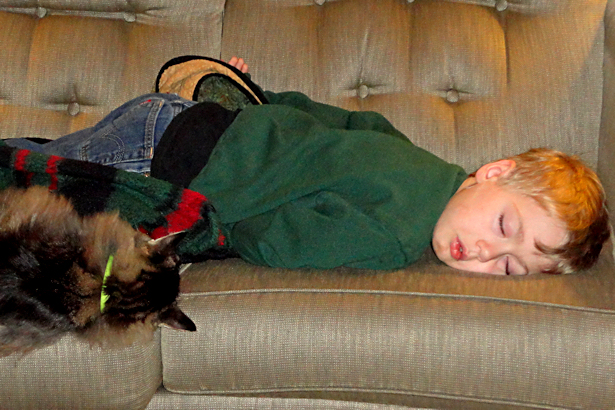 The day definitely took its toll on him though; he fell asleep on the couch several hours before his regular bedtime. Awwww, isn’t he sweet?

And all my worry was for nothing. He did recover very quickly – the day after his appointment he tried to bite a banana, and ran around enough to give me grey hair.

Now he delights in showing off his gums, and just grins at his new nickname: Vlad.