When we bought our house we inherited several things along with it: Pepto-Bismol pink exterior, clumps of thistles and cilantro five feet high, kitchen cupboards gummy with cooking oil, ugly 1960s trim and wrought-iron details, glossy white paint on every interior wall, I could go on and on. Let’s just say that we knew it needed “a little” work.

We also inherited a pear tree. A very prolific pear tree. A pear tree so prolific that we couldn’t eat enough pears to keep up, and the windfall pears attracted so many bees and wasps that it was suicide to go in the back yard.

We loved the pear tree. All of us except for Angel Face who hates pears.

Over the years we came to an uneasy truce with the pear tree. At first Teacher pruned the tree back so much that it rebelled by not producing any pears. Then Teacher let it grow, until the branches were so high that only the Jolly Green Giant or squirrels would be able to reach the pears. Finally Teacher reached pruning nirvana – the pear tree wasn’t too overgrown, and pear production pretty much met our demand. The few windfall and squirrel-abandoned pears were disposed of before they could attract bees. We had our back yard and yummy pears to eat too.

Life was good. At least as far as our partnership with the pear tree was concerned.

Then the storm came. Not an actual tornado, but tornado-strength winds that set off tornado sirens and sent us scrambling to the basement as they roared through the neighborhood, indiscriminately knocking down stately old trees and electric lines.

When it was safe to come upstairs again we were shocked by the devastation, but thankful that none of the giant trees that went down in our neighborhood caused any major damage to homes or cars. 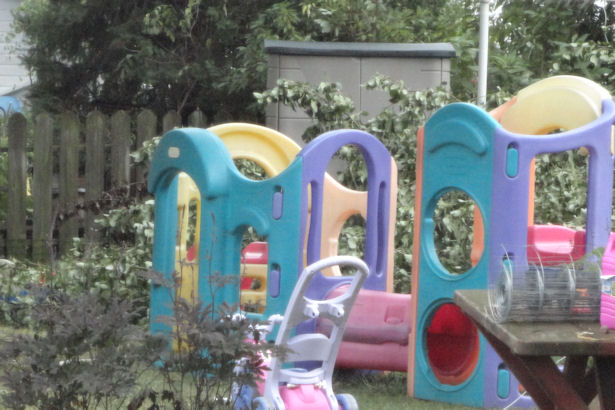 As we looked out the windows to see how our yard had fared, G was the first to notice: “Amy! A big branch fall down in the back yard!” 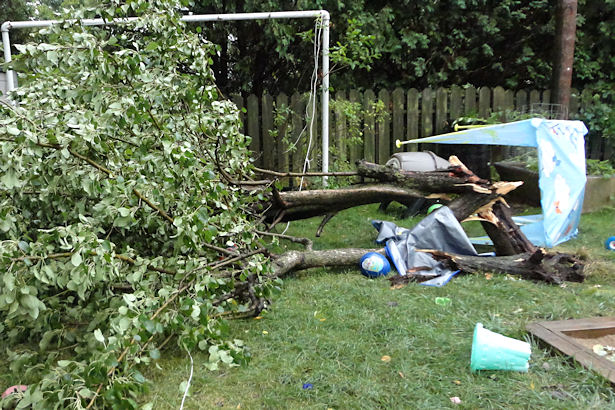 Sure enough – a big branch, which happened to be attached to the rest of the tree, had fallen. Amazingly enough, the canopy which hadn’t even been staked into the ground had only been flipped over by the wind. 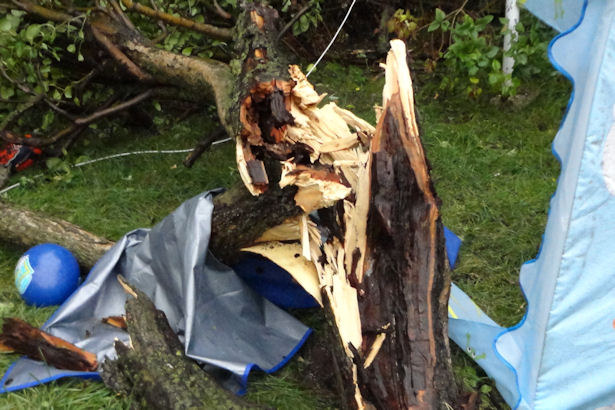 Apparently our pear tree hadn’t been as healthy as we’d thought, and the strong winds were too much for the diseased trunk. 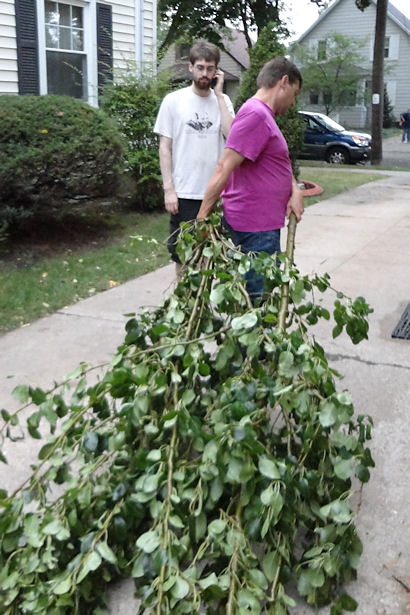 When Teacher got home from school he started carrying some of the smaller branches out to the curb. Our general area of the city had lost power, but College Boy was able to find ONE spot where his cell phone would get service. 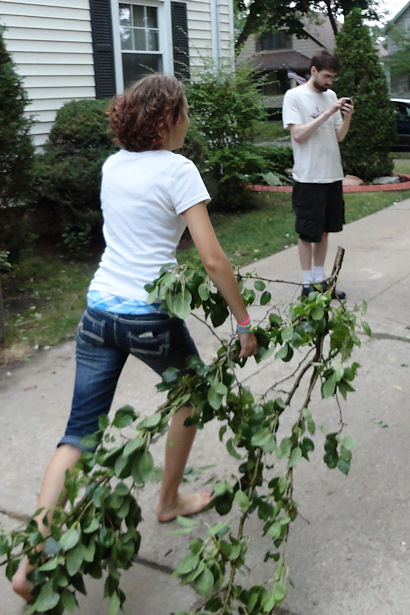 Angel Face came out to help with the tree. Even though she doesn’t like pears I think she was a bit shaken when she saw the whole tree lying on the ground. 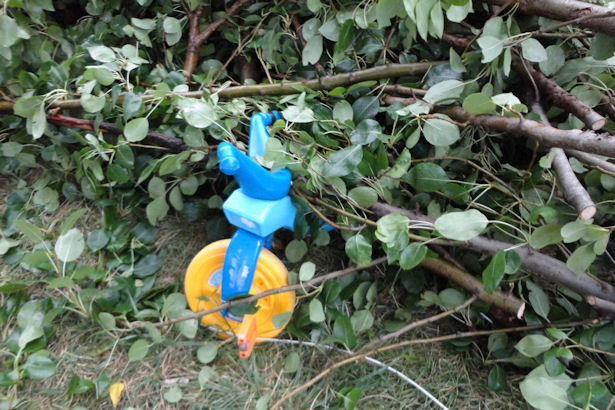 Disclaimer: No trikes were harmed in the making of this blog post. 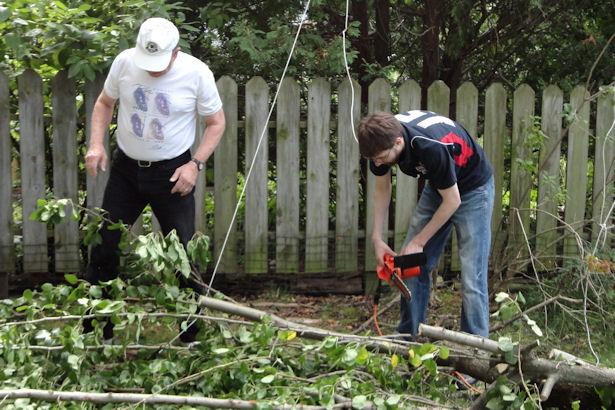 The next day was Saturday and Teacher had a soccer tournament, but Grandpa and College Boy came over to help clean up the rest of the pear tree. 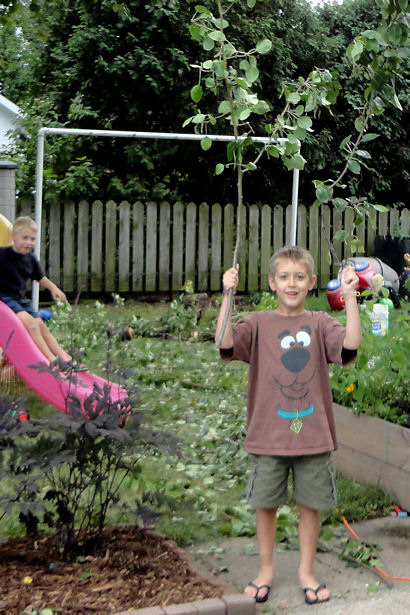 Z-Man helped out by carrying twigs and smaller branches. 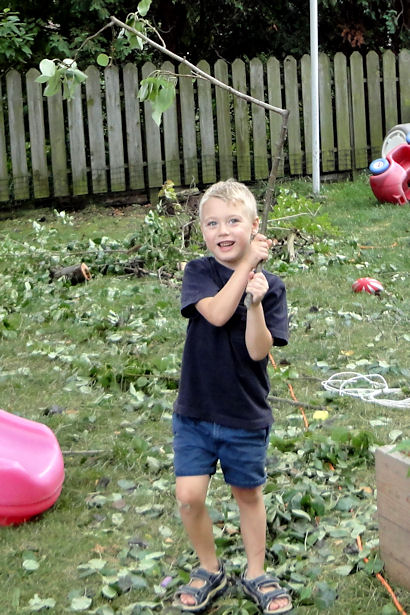 Of course, once Little Guy saw that his brother was helping, he had to grab a branch too. Monkey see, monkey do! 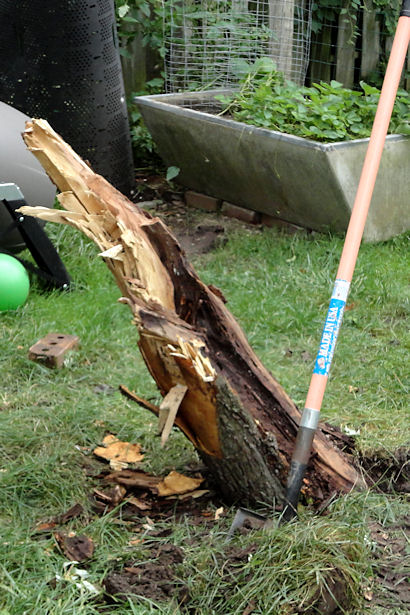 Soon only the trunk was left. 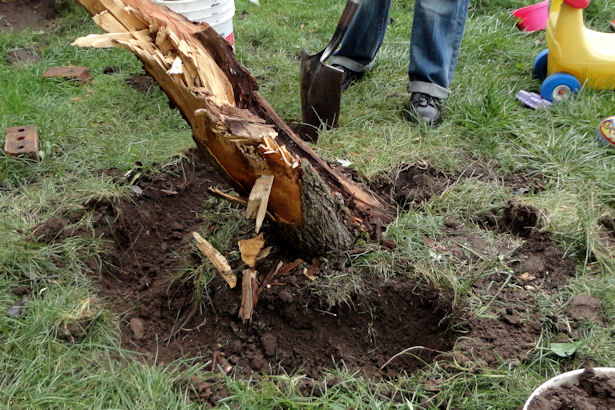 It doesn’t seem hard: simply dig a trench around the trunk, sever the roots, and pull it out. Easy peasy, right? 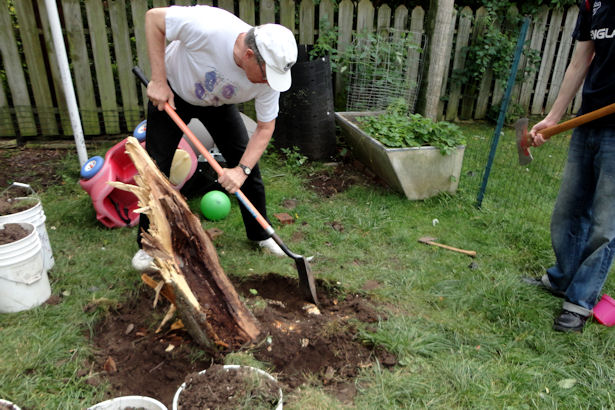 Of course there had to be a ginormous root right at the base of the trunk. And of course it had to be surrounded by other roots so the guys couldn’t dig under it. 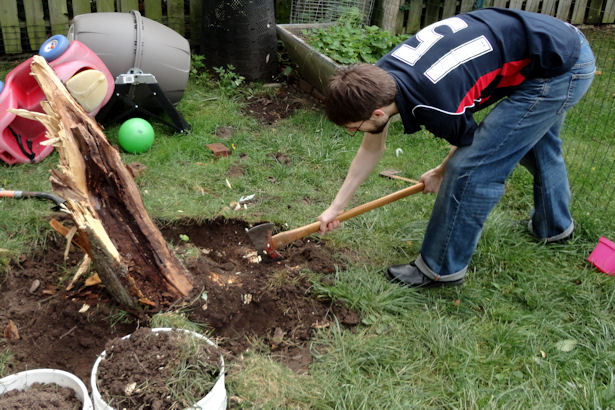 When the small tools won’t do the job, you bring out the big tools. In this case, an ax. Go College Boy – you can do it! 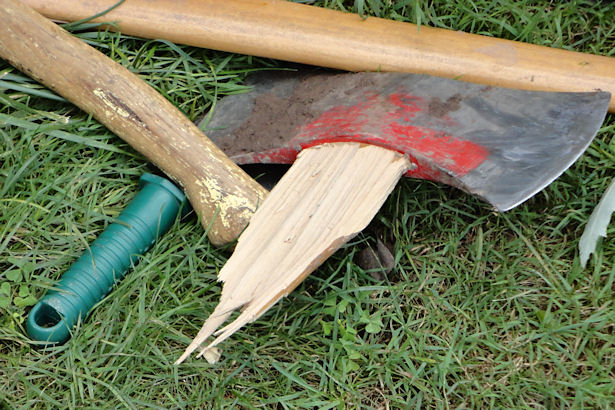 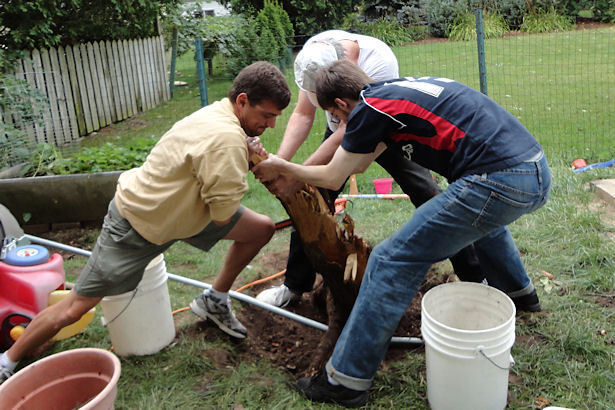 Teacher came home from soccer and lent a helping hand. Actually, I think he’s putting his whole body into it. 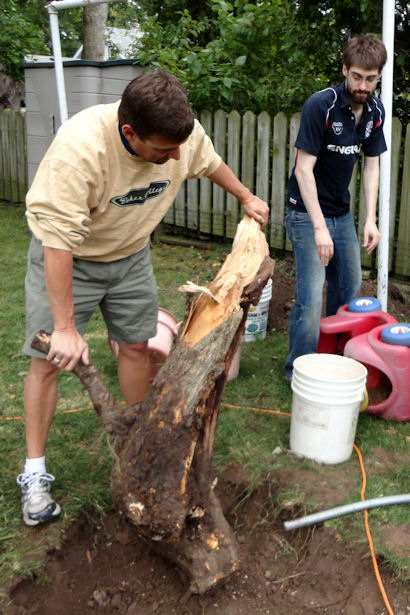 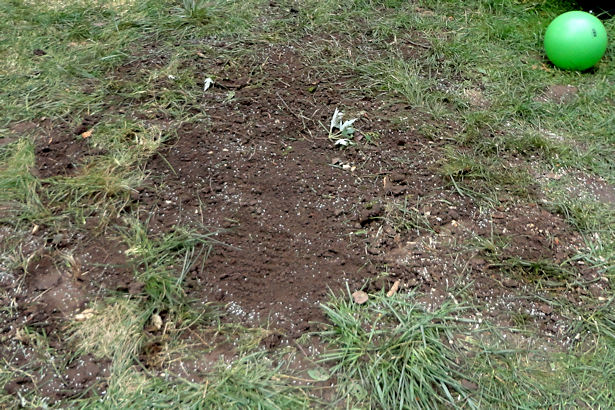 The trunk was carried out to the curb, which was piled shoulder-high with the rest of the tree. Then we refilled the hole and I seeded the dirt.

It looks so sad and empty to me.

But as we learned in The Lion King, life is a circle. So we’ll replant another tree to take the place of the old one.