I gave in. I didn’t want to, but I had to admit it was time. The girls had been saying “Mom, he needs one, he looks like a girl!” for weeks but I didn’t care. His hair was so soft and fine, with ends that curled up around his ears giving him an angelic look. I wanted to hold out as long as I could, but when I noticed that his bangs were falling into his eyes and the back of his hair was below his shoulders I had to admit it – it was time for Little Guy’s first haircut.

We went to The Barbershop, a local chain that is just for men. They have leather chairs and sofas, free coffee, water and peanuts to snack on, and a huge flat screen TV showing sports, sports, and more sports. I feel very out of place when I’m in The Barbershop but it’s cheap and the males in my house love it. I really can’t blame them; for $10 they get a cubicle with a TV, a haircut, shampoo, facial hair trim, hot towel, and head massage. I wish there was a Barbershop Call it “The Salon” for women – I could handle all that pampering for $10!

I knew that Little Guy would never sit on the chair so I held him on my lap and prayed that he’d sit still long enough. He absolutely refused to wear a cape – he held out his hand and said “Nooooo!” with a frown on his face when the stylist tried to put it on him. I wore one since I was dumb and had on black. Next time remind me to wear something hair-colored! 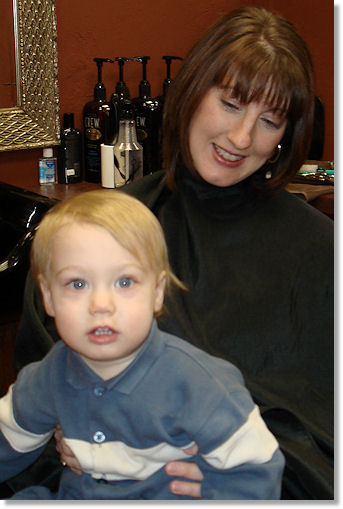 It turns out I had nothing to worry about. Little Guy was distracted by the cartoons on his little TV and by Angel Face wielding my camera. Yikes, don’t drop it! Having a Dum-dum to suck on didn’t hurt either; Little guy LOVES suckers! Actually he’s pretty fond of any kind of candy, but M&Ms and suckers are his favorites. 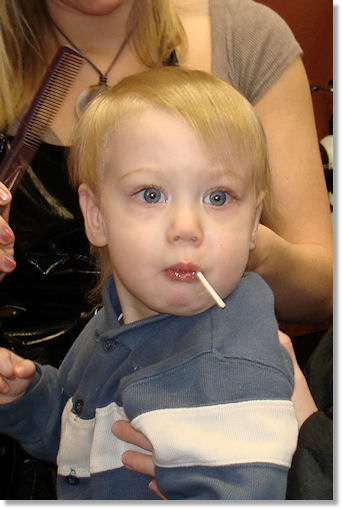 Almost done and he’s still sitting happily on my lap… 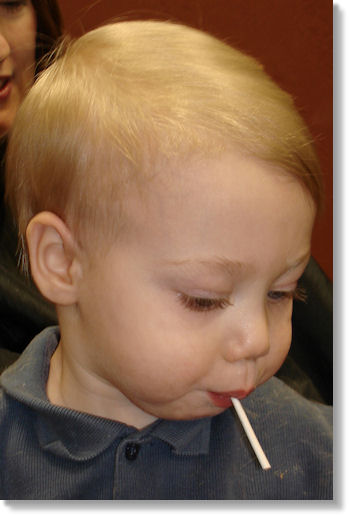 Here he is, all done! No more curls, but still amazingly adorable… not that I’m biased or anything. Actually, I am biased, but I’d still think he was adorable even if I wasn’t. 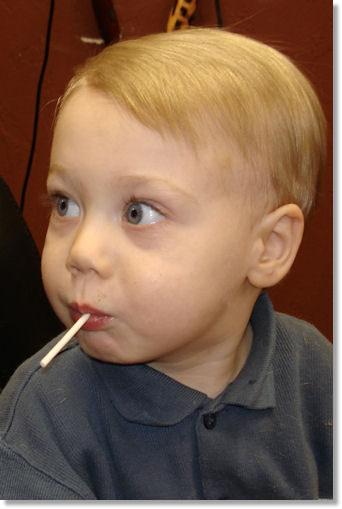