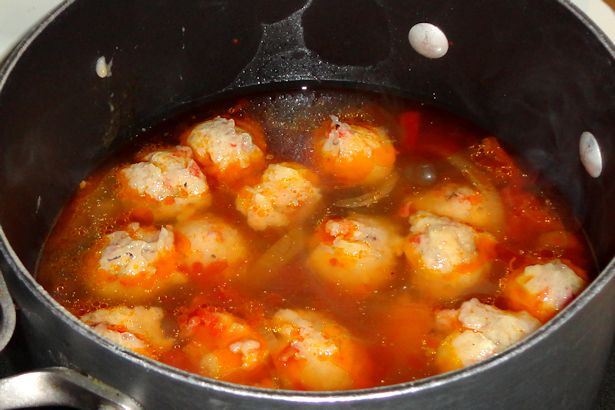 Sorry. I know it’s juvenile, but I can’t help it. Every time I think “Shrimp Ball Soup” I can’t help thinking “I didn’t know the little guys had those.”

Forgive me, I’ll try to restrain myself.

Teacher decided to make Shrimp Ball Soup *snicker* Sorry. to go along with our Pineapple Margaritas.

The whole time Teacher was cooking I bit my tongue so I wouldn’t say anything inappropriate about shrimp balls *snicker* in front of the boys, thus ensuring that we’d be subjected to never-ending comments and wise-cracks about shrimp balls.

To be honest, I expected the broth to be fishy or “shrimpy” – like that “off” scent that sometimes wafts towards you from the grocery store seafood counter, but it wasn’t at all! It reminded me of a not-creamy lobster bisque; sweet and rich and “seafood-y” but not overly so. The shrimp balls were tender and flavorful; lighter than any crab cake or meatball I’ve ever had, but not too soft or mushy. Just thinking about it makes me want some!

The recipe is from another Rick Bayless cookbook, Authentic Mexican, and is officially called “Shrimp-Ball Soup with Roasted Pepper and Tomato”.

One of the best things about Rick’s cookbooks is extra commentary surrounding each recipe: rich background information, engaging stories, tips and tricks, traditional and modern variations, etc. I think Authentic Mexican offers the best “extra” commentary – it’s almost more of a novel about Mexico’s culinary traditions with some great recipes thrown in than a cookbook. According to Rick, this recipe is a combination of several recipes found in various Spanish publications.

Shrimp Ball Soup – Directions in My Own Words

For the official directions and commentary, buy the book! 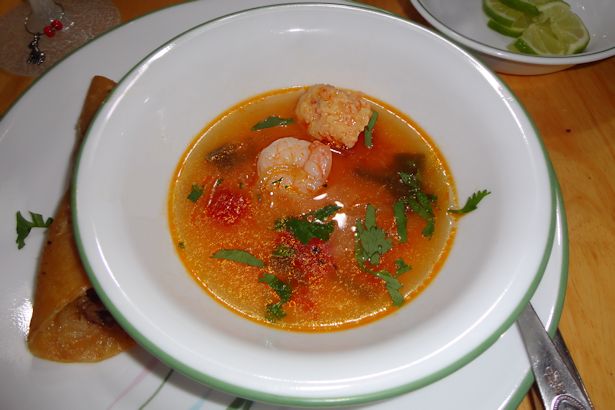