What do you do when you’ve got homemade pizza half done, then your husband the sweetest, most wonderful man in the world surprises you with pizza from Papa Murphy’s? You put your homemade pizza fixin’s in the refrigerator for the next day, then make homemade pizza with your child care children for lunch instead of what was on the menu. Not something a group center can do, but easy to do in family child care! 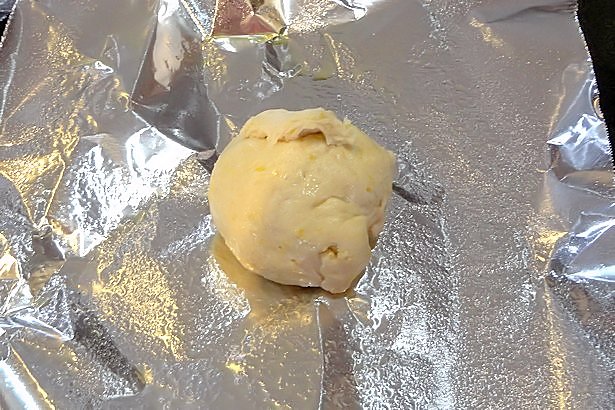 The hardest part was trying to figure out how much pizza crust dough to give each child.

After totally over-thinking the problem I finally just grabbed a handful of dough, formed a ball, and weighed it. Then I separated the rest of the dough into the same size balls – 2 oz – and wondered why I wasted so much time trying to figure it out mathematically.

Each child was given a dough ball on a piece of foil that had been sprayed with olive oil. The rest of the dough balls were placed back into their ziplock bag and put back into the refrigerator.

I had originally planned to make the rest of the balls into little pizzas for our family, but when I realized how long it would take I decided to put the rest of the dough balls back into the fridge. If the kids want pizza they can make it themselves. 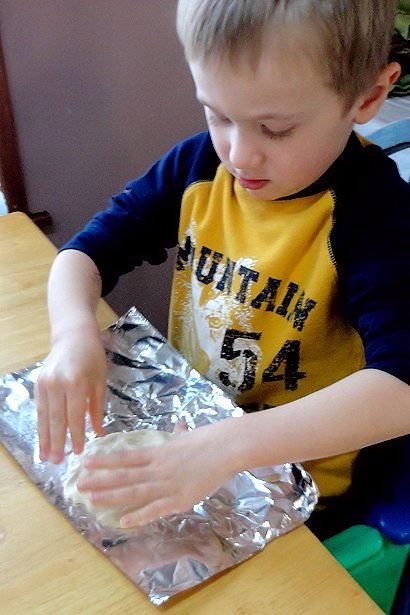 After carefully washing their hands, the children patted their dough balls out as much or as little as they wanted. 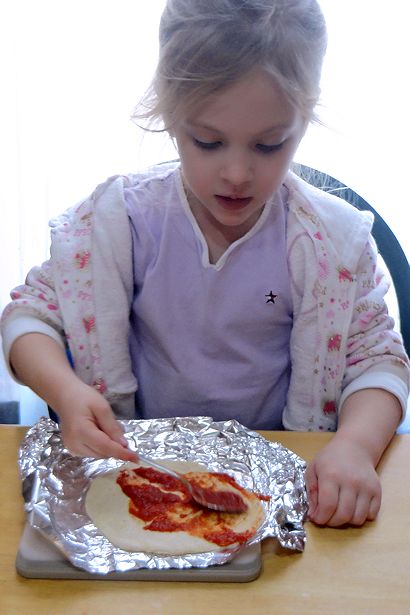 I gave them each a spoon and let them scoop one or two spoonfuls of pizza sauce out of the can. They had a lot of fun spreading the sauce on the crust. 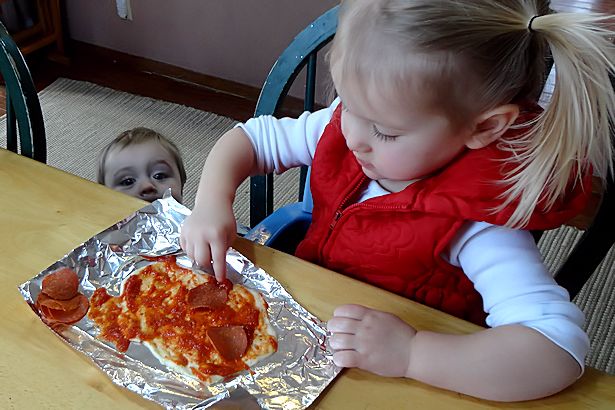 They were allowed to choose any combination of pepperoni, sausage, and cheese. All of them except one chose all three.

Don’t you love little K peeking up to see what A is doing? He’s eight months old and has to be right in the middle of things all the time. 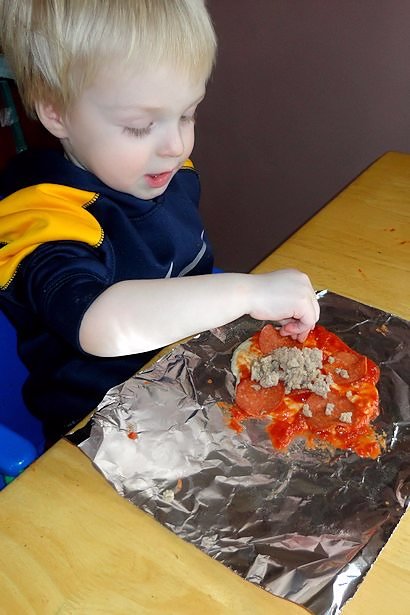 I’d cooked the sausage the night before, so it was cool enough for them to handle – and taste. They didn’t know it, but the pepperoni and sausage were both turkey. Two points for stealth health! 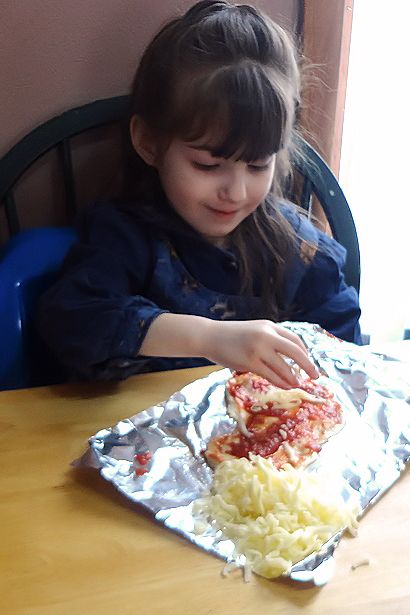 Guess who made a cheese-only pizza… Yup, Peanut! She received extra cheese to fulfill the Food Program’s minimum requirement for meat.

Usually I include veggies on the homemade pizza I make for child care, but this time I hadn’t gotten around to chopping any veggies the night before so I didn’t have any ready, and the children really don’t like veggies on their pizza. Rather than make extra work for me and possibly ruin the experience for them with a disagreement about veggies on their pizza, I figured it was just as good to have the veggies on the side. It was a good decision – they ate all the pizza AND all their side veggies. Two more nutrition points! 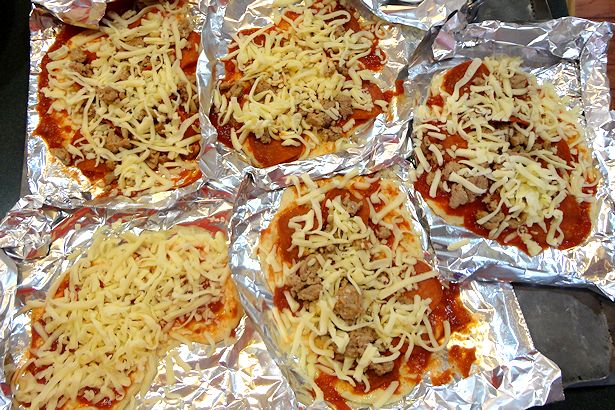 I wrote each child’s first initial on a corner of their foil with a Sharpie so I’d know whose pizza was whose. Then they were all placed on a large flat cookie sheet. 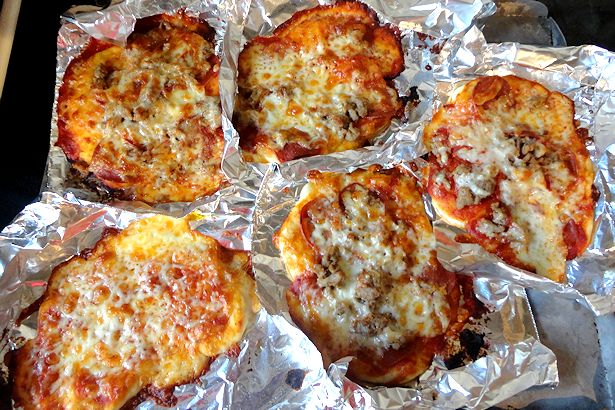 After 15-20 minutes in a 400° oven they were done, and looking even yummier than before. 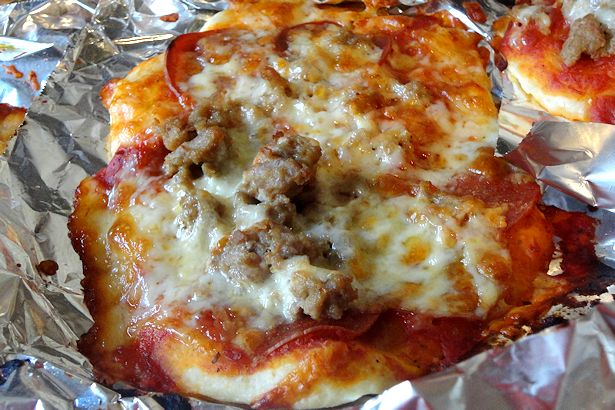 Mmmm, they smell soooo good too! I was so busy helping the children make their pizza I forgot to make one for myself. Oops! 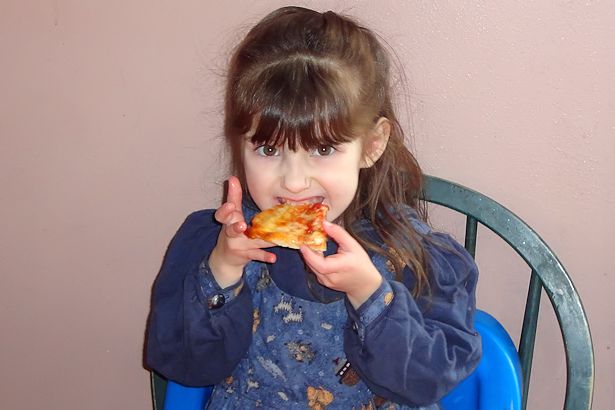 Making our own pizzas was a huge success! Not that I was worried – we make homemade pizza as a family all the time and everyone loves it, so I was sure the child care children would love it too.

I just wish I’d remembered to make one for myself… Leftovers again. Poo.