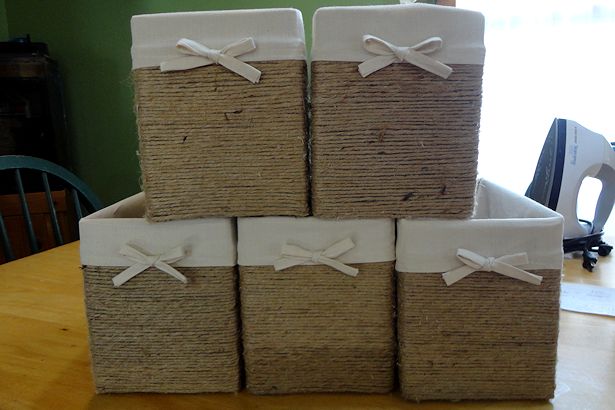 As part of my Reggio-inspired environment transformation I wanted to add baskets to the diaper cubbies so they’d look nicer. The problem was that I couldn’t find baskets the right size, and any that were close to the right size were too expensive.

Pinterest to the rescue! I saw twine-wrapped boxes with liners on Pinterest and decided to make my own.

I took photos of the twine-wrapping but they were awful apparently Little Guy got his hands on my camera again so I had to delete them. I’ll take new ones when I do the next box, but in the meantime, here are directions to make the basket liner.

Disclaimer: When I sew for myself I don’t worry too much about making it perfect; as long as the part you see looks good and it works I’m happy. You may be more or less concerned about perfection so adjust your sewing technique accordingly. Also, I hate pinning and have enough experience that I can skip pinning things in most cases, but if you’re less experienced or more concerned about perfection you may want to use pins. I won’t fault you either way. 😉 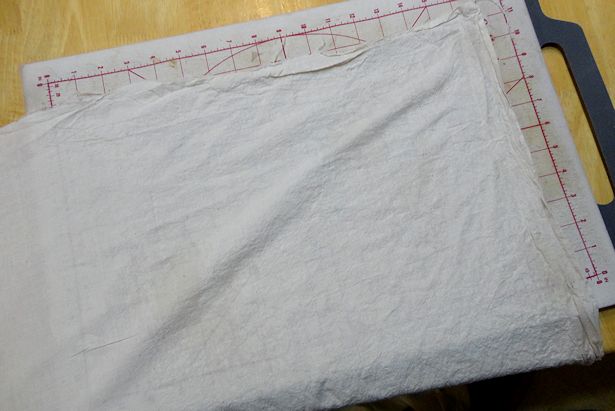 I wanted a rustic look so I bought the cheapest muslin I could find, but you could use any fabric you like. I preshrunk the fabric by washing and drying it on hot, then gave it a good ironing. 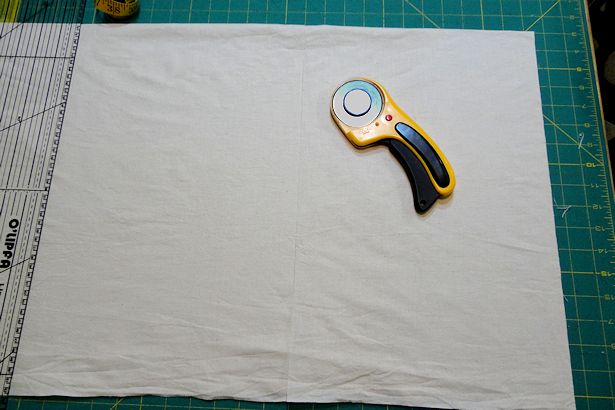 To figure out what dimensions to cut each piece I measured the twine-wrapped box.

First I measured the bottom of the box. I added 1/2″ to both the width and height to allow for a 1/4″ seam allowance all around.

Then I measured the sides of the box from one corner, all the way around, and back to the same corner again. I added 1/2″ to that measurement for seam allowances. Then I double-checked my numbers by measuring each side individually, and added the measurements plus 1/2″ seam allowance. The total was almost the same as the first measurement. Hooray! This Old House taught me to “measure twice; cut once” but I tend to do the opposite when I’m not being careful.

For the height of the sides I determined how much basket liner I wanted to show on the outside of the box and marked that place. Placing my tape measure at the mark, I ran it up to the top of the box, then down the inside to the bottom. I added 1″ to this measurement for seam allowance, hem, and to leave a little extra in case of error. It’s easier to make things smaller than to make them bigger. I double-checked that measurement also, then cut out all of the pieces.

For the bows I took a scrap of fabric, cut it into a 1 1/2″ width and folded it in fourths the long way. I tied it into a bow… Then I untied the crappy-looking bow and tried again… And again…

By the fifth try I had a decent bow. Finally! I trimmed the ends, untied the bow, measured the length, then added 1/2″ for the hems. I cut the fabric 1 1/2″ wide because that’s the width I’ve used in other sewing projects to make spaghetti straps, bows, etc. 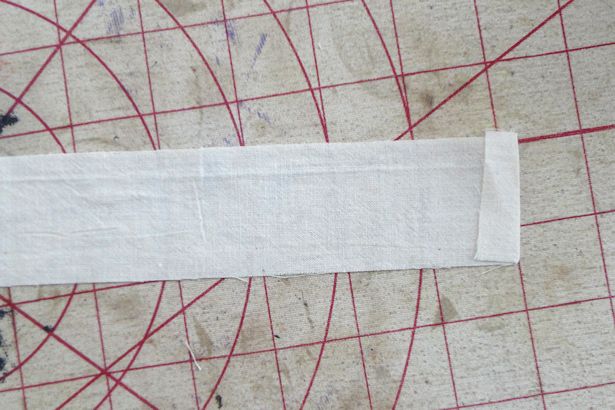 Since the bows would be the easiest to sew I started with them. First I pressed 1/4″ in on both short ends. 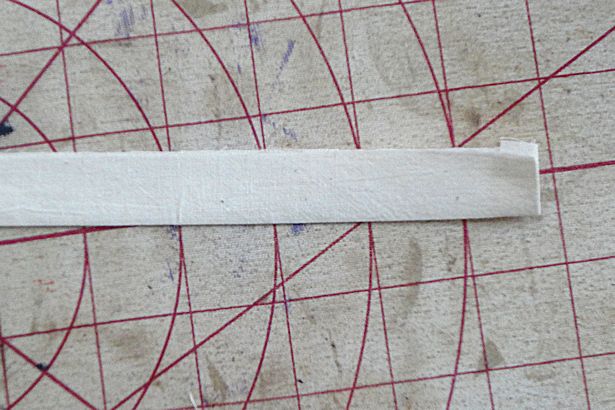 Then I folded them length-wize aka the “hot dog” way and pressed along the fold. 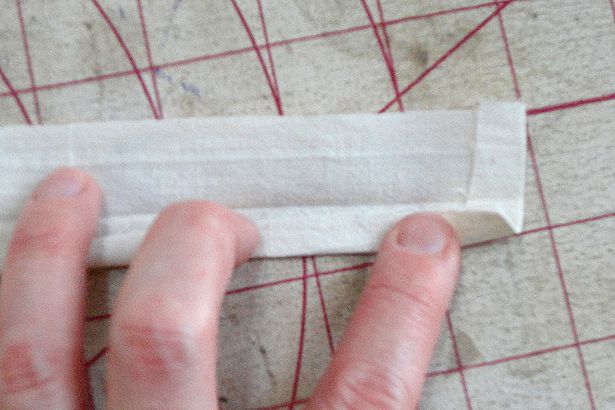 Then I unfolded the fabric and folded one side in so the raw edge met the fold. Since I always burn my fingers at this step I skipped ironing and simply finger-pressed the fold. 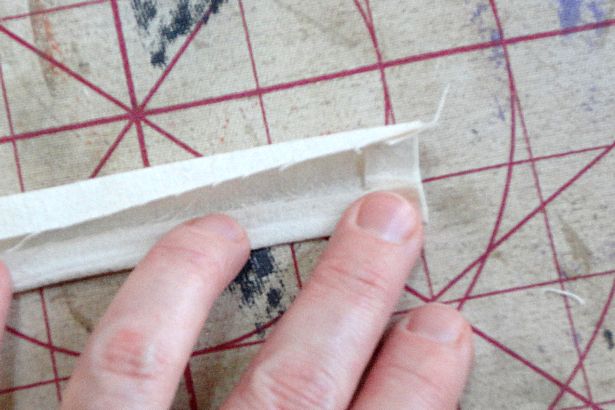 I did the same thing with the other side, again finger-pressing the fold. 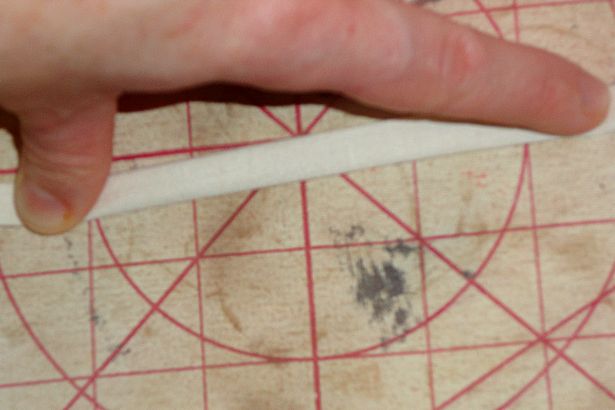 Once both sides were finger-pressed I folded the fabric down the center fold again and pressed the whole thing with the iron. 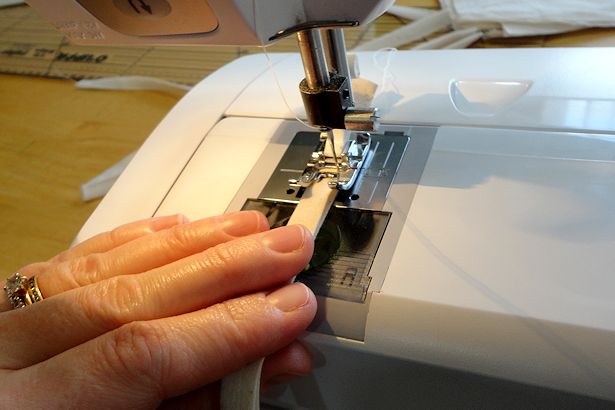 Then I top-stitched close to the edge. 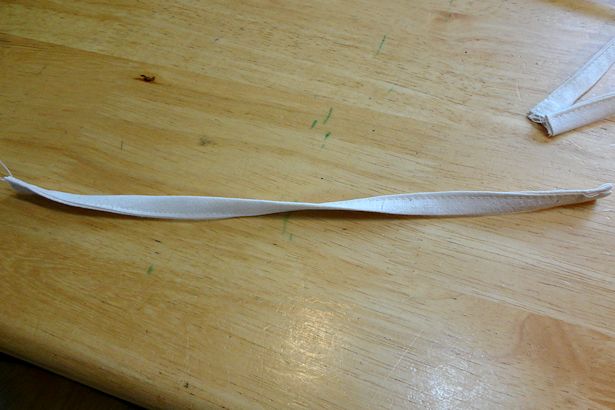 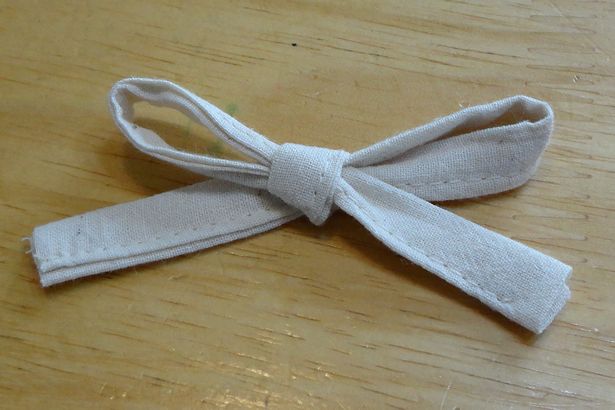 It only took me three tries to figure out where to start the bow in order to make it even. Once I figured it out I tied all the bows right away so I wouldn’t forget.

On to the basket liner itself!

First I sewed folded the side piece of fabric right-sides-together and stitched them together with a 1/4″ seam allowance. 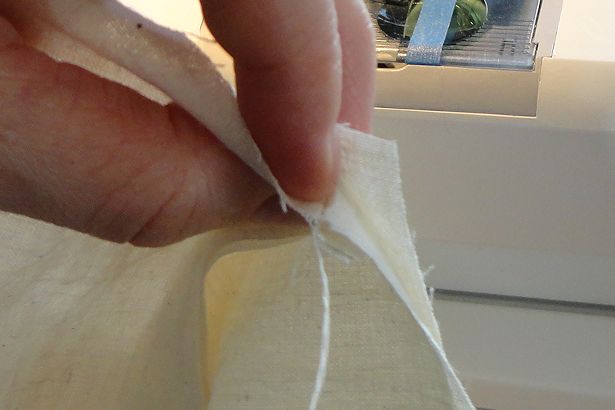 Then I put the side fabric and bottom fabric together, right-sides-together, lining the side seam up with a point about 1/4″ from the corner of the bottom fabric. 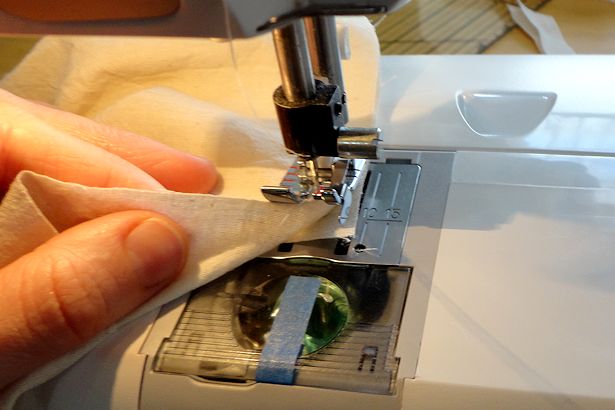 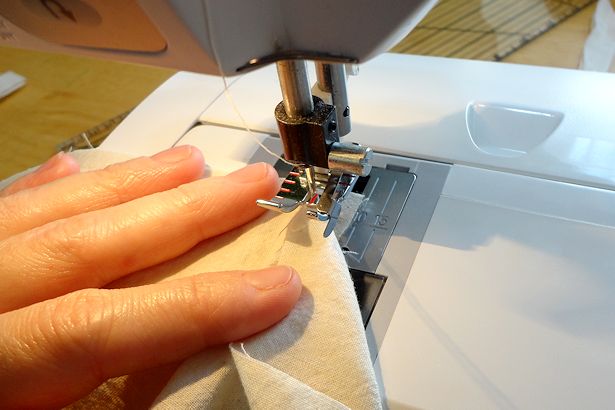 I continued to stitch, stopping and pivoting at each corner, until I reached the corner with the seam, where I started. On some of the basket liners the fabrics met up perfectly but on a couple the side fabric ended up a little bigger so I had a small pleat at the end. Because I’d planned to put the seam toward the back of the basket I didn’t really worry about it, but if you want yours to line up perfectly you could rip out part of the side seam and re-stitch to make it the right size. 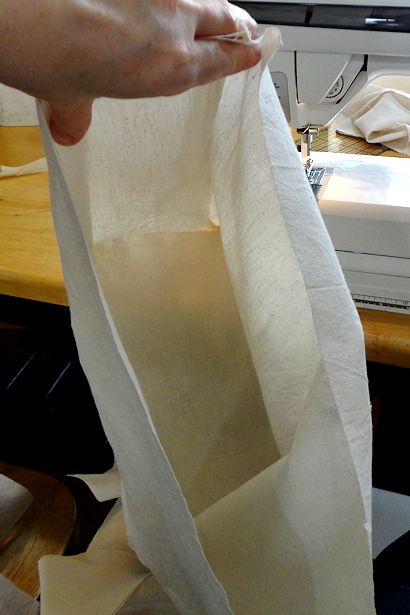 Here’s a view of the inside. That was the hard part, the rest is just measuring, pressing and topstitching! 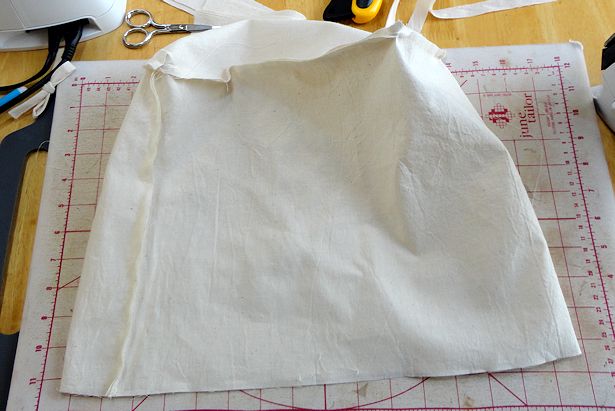 Time to make the hem and finish these basket liners! 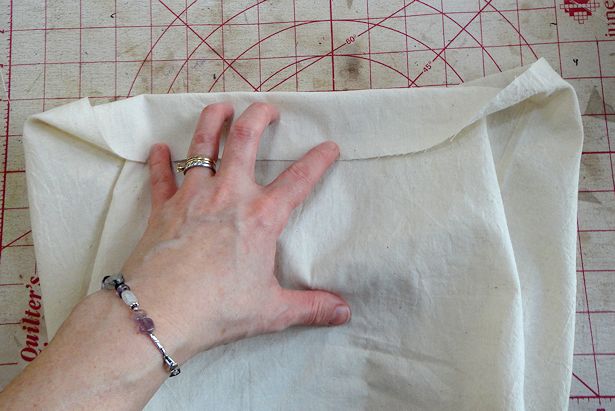 I’d planned for a 2″ overlap, but because I hadn’t wrapped the twine all the way to the top of the box you wouldn’t see it anyway I had to double the fabric so the box wouldn’t show through. 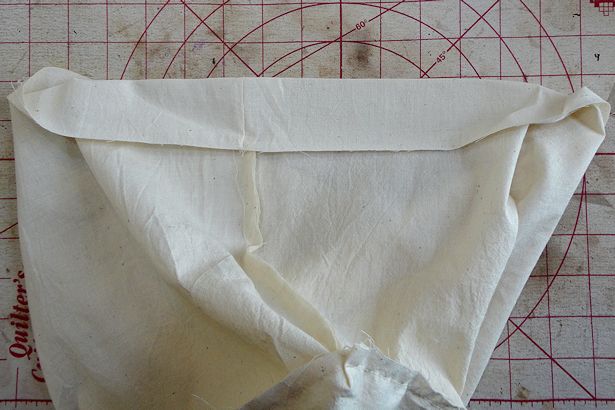 I folded the fabric over 2 1/2″ and pressed. If my fabric didn’t have to be doubled I would have just folded it 1/2″. Pressing gives it a nice, crisp fold and helps keep it in place so I can skip pinning. 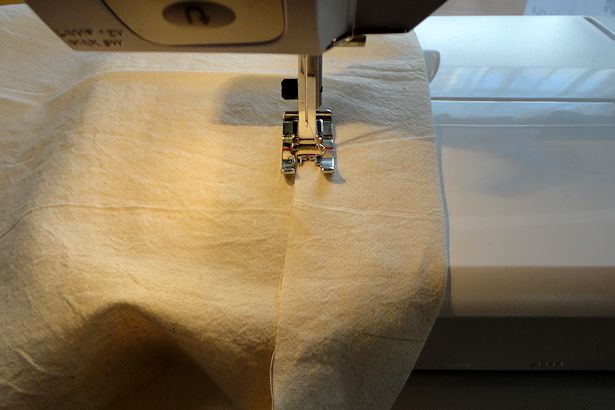 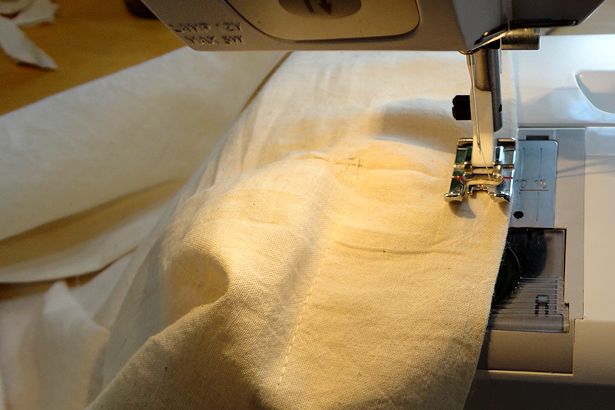 Then I topstitched 1/4″ from the folded edge to make it look nice and give the impression that there was a 1/4″ hem. 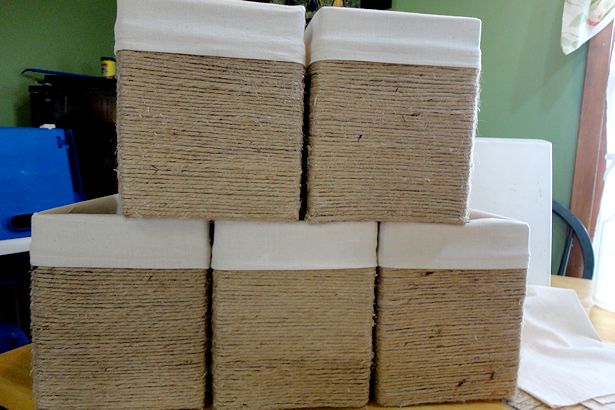 I put the basket liners in my twine-wrapped boxes and adjusted them so the corners fit into the box corners and the hems on all the boxes were even. I briefly considered hand-sewing the bows to the liners, then decided that was a waste of time and hot glued them on instead.

They look great, if I say so myself! I’d guess that each “basket” cost less than $3 and took under 1 hour to make. It could be less since I didn’t time myself making the basket liners, and made all five “assembly line style” at once. 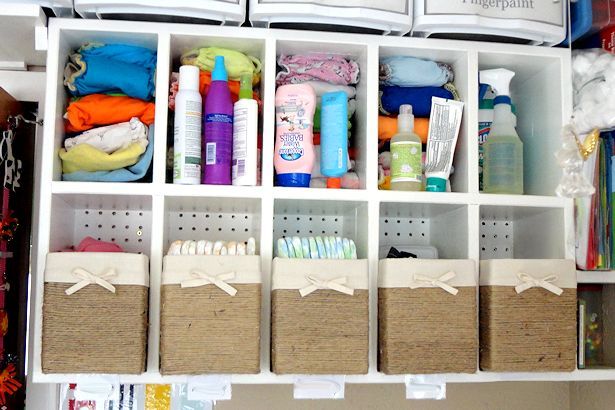 I love how clean they make the diaper cubby area look. Now I just need to make some for the top cubbies!

I hope I’ve inspired you to make your own basket liners! Watch for the twine-wrapped box tutorial to come… Sometime…