At our house more often than not the question “What’s that smell?!” doesn’t have a happy answer.

Luckily this is one of the few times it does. 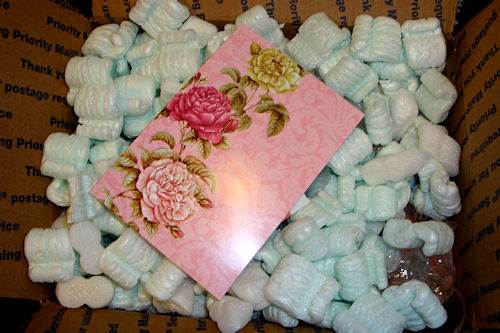 A delicious smell wafted from the closed box, and got stronger as I opened it.

Right on top was a handwritten “Thanks for your purchase” card, and hidden among the packing peanuts…

I’m totally addicted to wax tarts. From the moment the windows are closed in the fall until they are reopened in the spring I have a tart in the warmer. Obviously I love food scents, especially “comfort food” and bakery scents, but not citrus or berry ones. I can’t stand “fresh” or floral scents either – I have no idea why.

These came from Black Mountain Candle on Etsy, and smell just as luscious as their names suggest. I bought a “sampler” package so I could have a variety of scents to choose from.

So far I’ve tried Fudge Brownie – which smells exactly like brownies fresh from the oven, Pumpkin Pie – which smells almost like the pumpkin pie I made this week, and Snickerdoodle – which I think smells just like my favorite cookie but Princess says is more like frosted cinnamon rolls.

In any case, they all make our house smell delicious! A vast improvement over the “eau de poo” that sometimes lingers near the changing table. 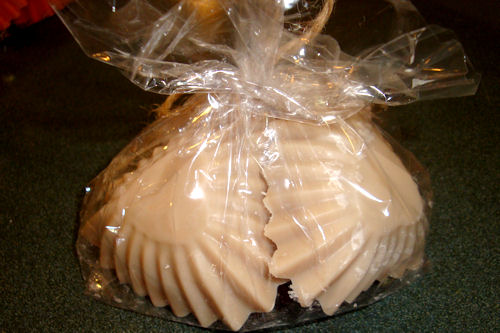 Not only do they smell great, they’re really pretty too. The last bunch of handmade tarts I bought were just small squares – yummy to smell but not as nice to look at.

Since I turn the warmer on first thing in the morning and don’t turn it off until I go to bed, my tarts usually only last two days but these are soft enough to easily cut in half, and scented enough that just half a tart will still last two days. Gotta love that!

I wonder how long a quarter tart would last…

Do you like tarts? What are your favorite scents?