Dinner at the In-Laws – Day 1 of Vacation Ends

We wrapped up our first day of vacation with dinner at Teacher’s brother’s house. We hadn’t seen his family for a couple of years so we were looking forward to it.

It had been so long since we’d seen them that we’d never met their youngest yet. She’s almost 3 and potty-trained already. I wish my kids trained that easily! 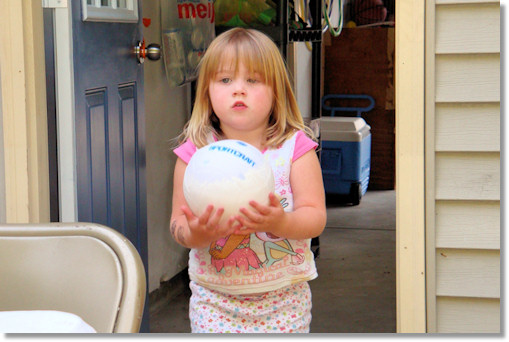 Jo-Bear and his cousin got along like a house on fire. What the heck does that mean anyway? I mean, what would an on-fire house get along with? Water? Wind? What a stupid phrase anyway. I guess it’s no surprise the boys get along considering they both have a love of video games and annoying their sisters. 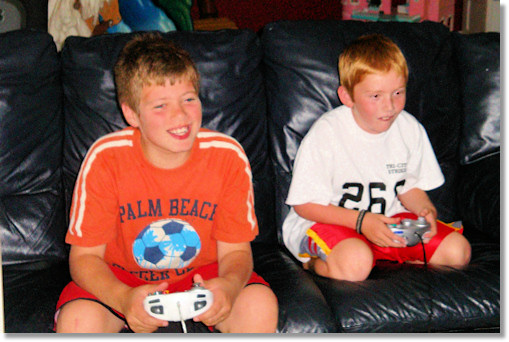 The oldest is growing up so quickly. I know she’s not much younger than Angel Face but I was surprised to see the little girl I remember replaced by a “tween” – complete with giggles. 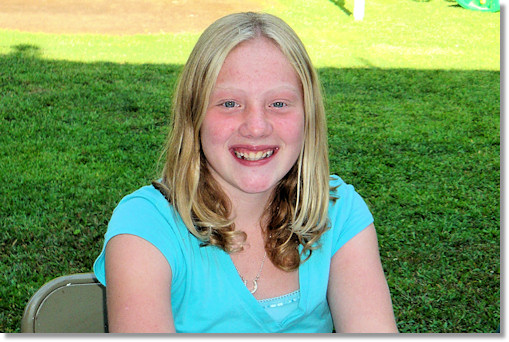 This is Teacher’s brother, a real smartass. You can tell by the look on his face he thought I wouldn’t take his picture if he flipped me off. Wrong! He shoulda known better. 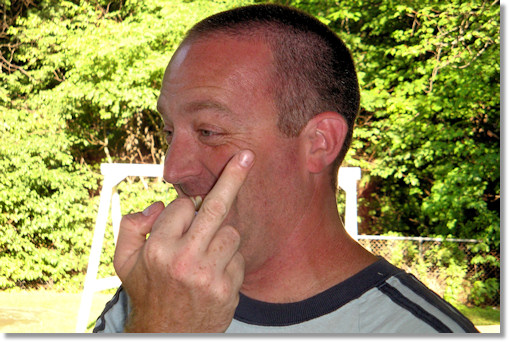 Every time we see Teacher’s brother he looks more and more like his dad. He talks and acts like him too… except for the finger thing; that’s 100% him. 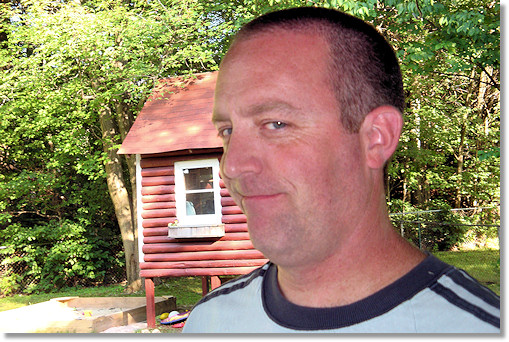 Here’s a photo of Grandpa – can you can the resemblance? It’s especially strong around the eyes and when they laugh. 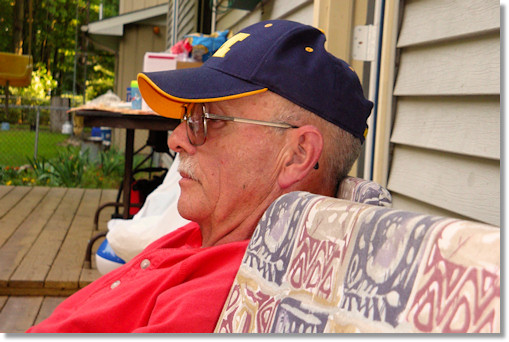 Time to get the badminton tourney going! It was a blast – teams were in a constant state of change as people jumped in and out of games and changed sides at the drop of a hat. 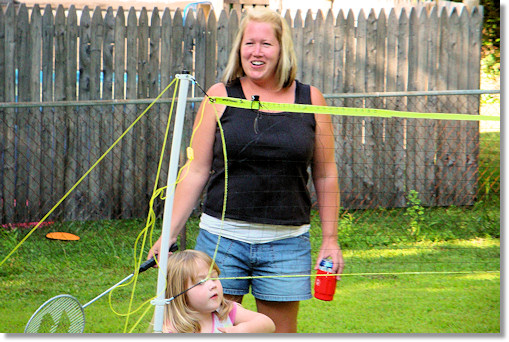 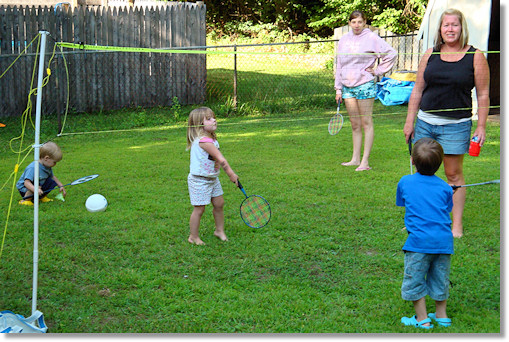 Jo-Bear and Angel-Face set their feuding aside to be a team for a while. It was nice to see them working together instead of sniping at each other. College Boy and Princess went through this phase at the same age, then Princess and Angel Face did too. They came out of it eventually so now I’m waiting for Angel Face and Jo-Bear to get through it… and waiting… and waiting… still waiting… 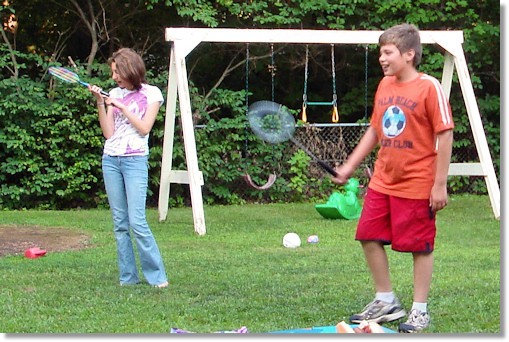 Z-Man and his youngest cousin were soooo cute trying to play too. I don’t think they hit the birdie more than once, but they had tons of fun trying. 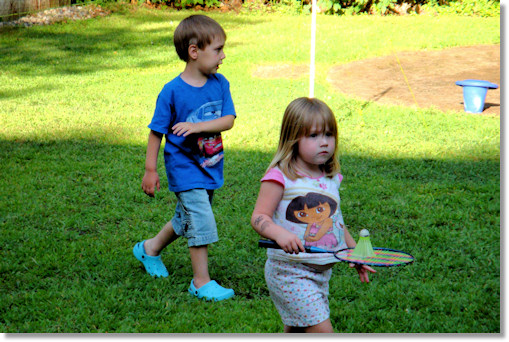 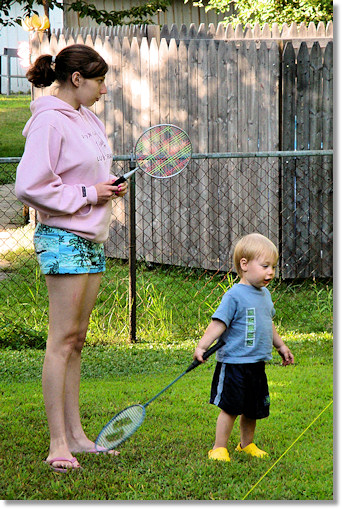 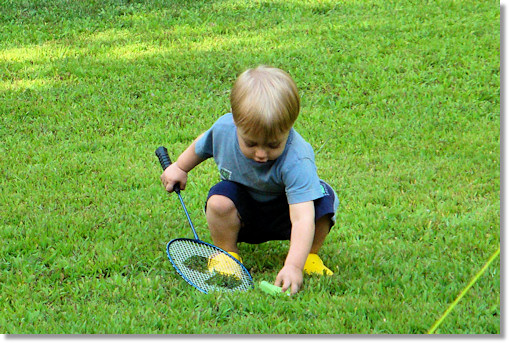 Whew, badminton is hard work! Teacher joined in while Jaden and Z-Man take a break. When do we get S’mores?? 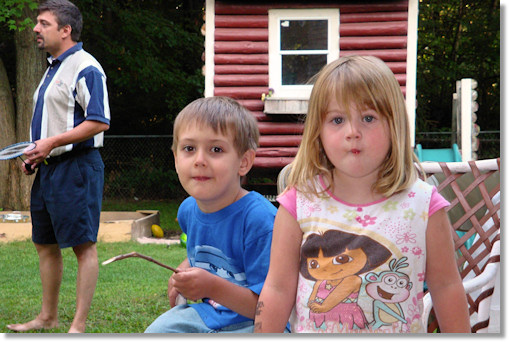 Time for a break! Princess always smiles for photos. She’s learned that I won’t give up until I get a photo of her. 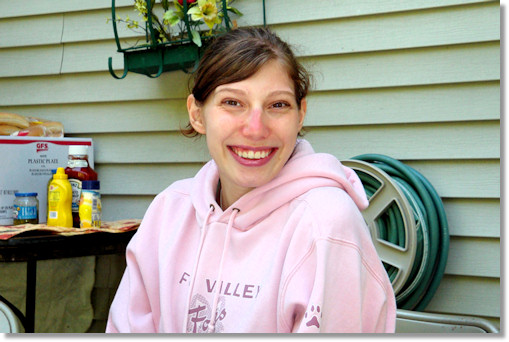 Angel Face usually avoids the camera but this time she surprised me with a beautiful smile. Wow, she’s growing up pretty… look out boys, you won’t know what hit you! 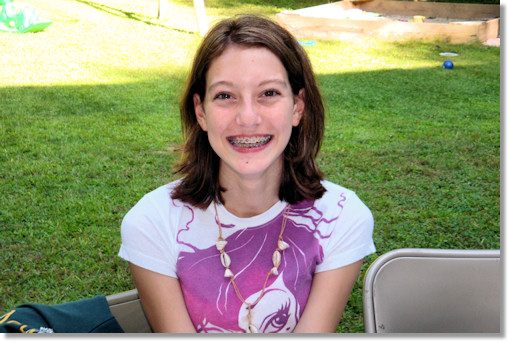 Teacher’s playing around with his camera, which used to be mine. We’d planned to get him one, but instead he made me get a new one and he took my old one. He’s sweet that way. 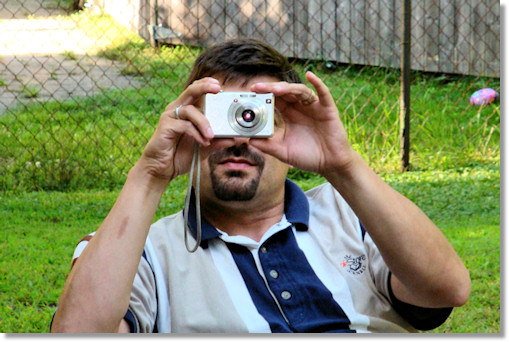 At the end of a long day there’s nothing better than relaxing by a fire and eating S’mores. Life is good! 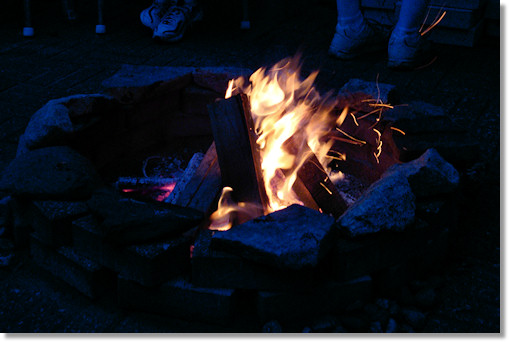 More vacation on the way…