I Feel Guilty, but it was Worth it! 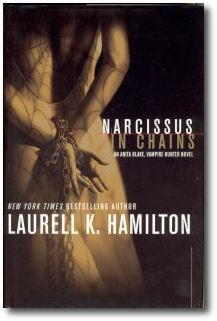 I was a bad WAHM last night… I didn’t work. Not one stitch, not even a smidgen of a stitch. No emails, nothing. Instead I got caught up in the latest book I’m reading, “Narcissus in Chains” by Laurell K. Hamilton. It’s one of the Anita Blake, Vampire Hunter, series that Teacher got me addicted to a couple of months ago.

Vampire books have fascinated me since I was in high school; not the scary gross ones, but novels with the vampire as a romantic hero. Teacher has helped me find “good” vampire stories in the past, so last spring when he read about the Anita Blake series he thought he’d get the first one to see if I’d like it. And did I ever like it!

The Anita Blake series is set in St. Louis which is cool because we lived in the St. Louis area for 5 years. When Anita describes humidity so thick you can cut it with a knife I know exactly what she’s talking about. When she’s driving along a certain road or in a particular part of the area I can picture it vividly. I also enjoy Laurell’s world where supernatural beings fit into everyday life so naturally and believably that I have to keep reminding myself that it’s not real!

So last night when I settled down for my nightly ritual of cuddling and nursing Little Guy to sleep I grabbed the book instead of my laptop. My plan was to read just until he fell asleep; which usually takes about half an hour. But when he fell asleep I was almost done with the chapter so I decided to finish it. You can’t stop in the middle of a chapter you know! Before I put Little Guy in bed I had to peek at how the next chapter started; then of course after he was settled I had to read just a little more, then a little more, heck I might as well finish it. By this time it was almost 10:00 so I decided to read until 10:00, then sew. Many pages later I looked up at the clock and it was past 10:30 – since bedtime is 11:00 it wasn’t worth it to drag out the machine and start sewing so I just kept reading.

Tonight I swear I’m leaving the book safely upstairs where it won’t be quite as big a temptation!