Teacher and I were in JoAnns, picking out fabric for reusable gift bags, when he spied a Cars Christmas flannel.

Little Guy is obsessed with the movie Cars and all things Cars.

His past three birthdays have been Cars themed, he’s dressed as Lightening McQueen for Halloween, and has only wanted Cars toys for Christmas. He’s even learned how to use my iPod to find Cars YouTube videos. 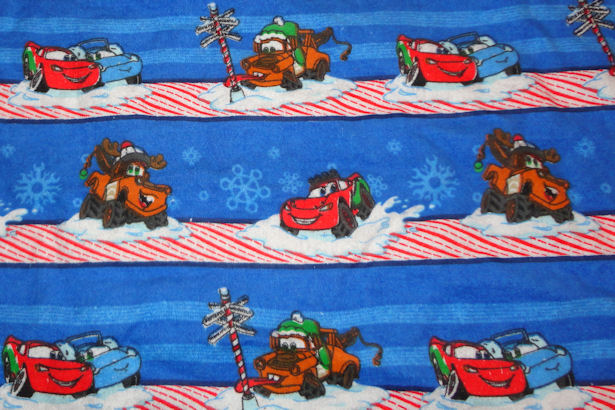 We knew we had to get him the Cars Christmas flannel, and I decided to make him a pair of pajama pants. I didn’t have a pattern, but figured it couldn’t be too hard… and for once I was right! OK, I did make one major mistake at the very beginning, but I fixed it right away and can tell you what not to do. Be sure to read to the end before you start sewing so you don’t follow me in my mistake! 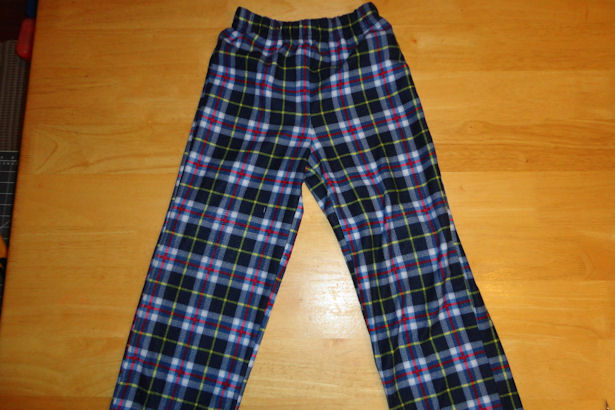 Not worrying = my first mistake. 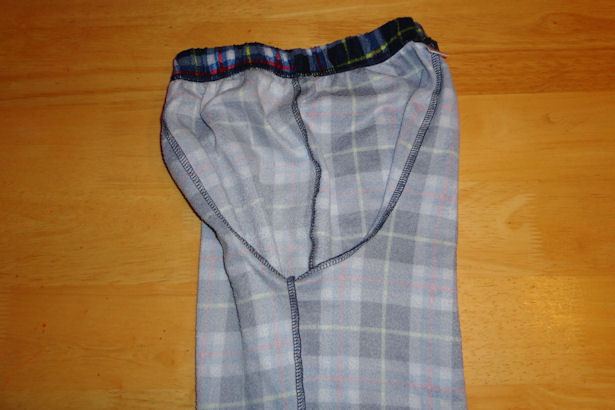 I pulled one leg into the other to expose the crotch curve. I hate the word “crotch;” isn’t there a better alternative? These pajama pants consist of 4 pieces of fabric: Front right, Front left, Back right and Back left. My plan was to line up the side seams on the fold so instead of four separate pieces of flannel I’d have just two pieces: Right and Left.

What’s that saying about the best-laid plans?? 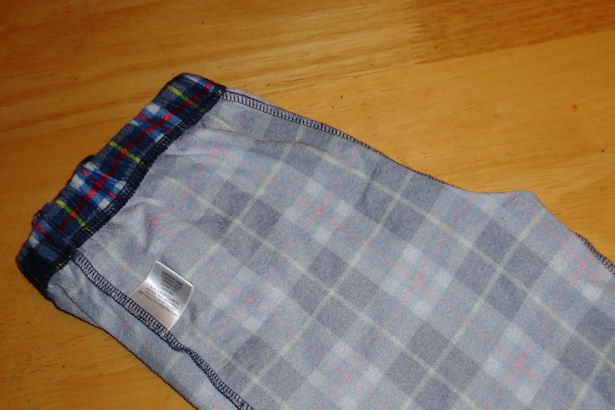 The back section didn’t line up exactly right from seam to seam – apparently the front pieces are wider than the back. 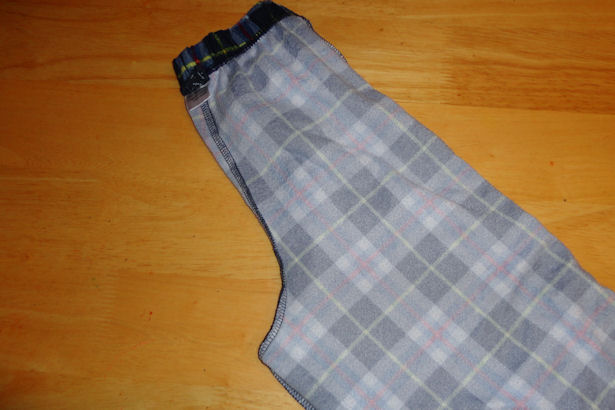 I squished the front section together to make the back section line up at the seams. 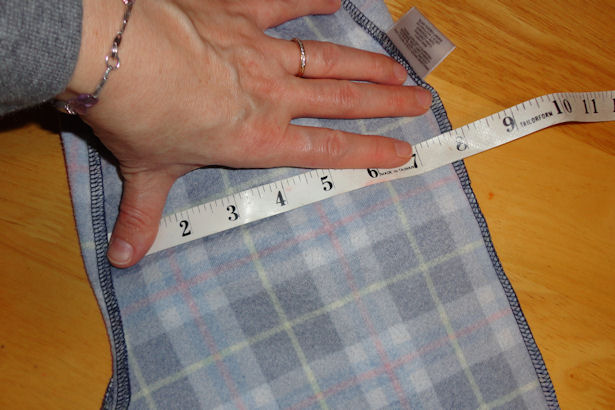 Then measured a front section from front seam to side seam… 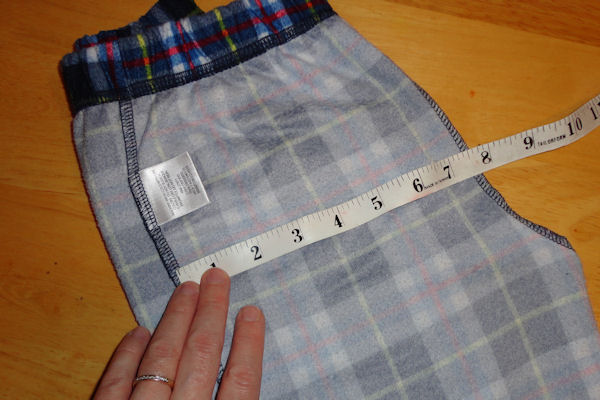 And a back section from back seam to side seam. I wanted to make sure both sections would fit on the flannel BEFORE I started cutting. The flannel was more than wide enough. 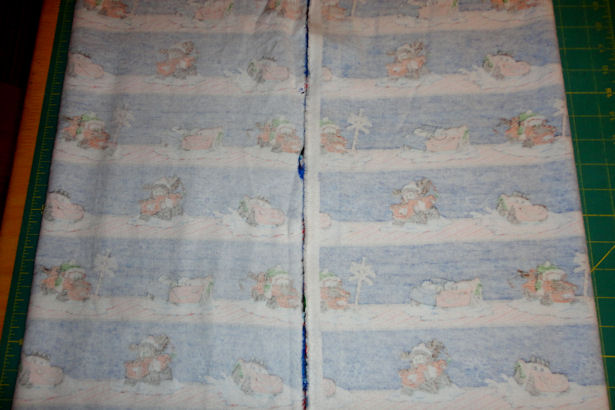 Then I folded the flannel right-sides-together with the selvedge edges meeting at the center. 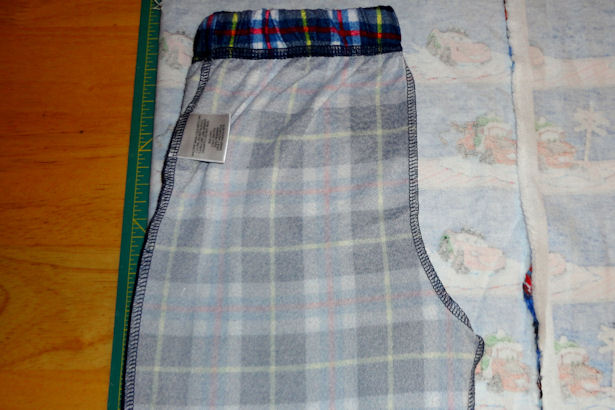 I laid the pajama pants on the flannel, lining the side seam up along the fold. Because the waist elastic draws in some of the fullness, when I got toward the waist I made sure that the inner leg and center seams were lined up, even though that meant that the side seam pulled away from the fold. 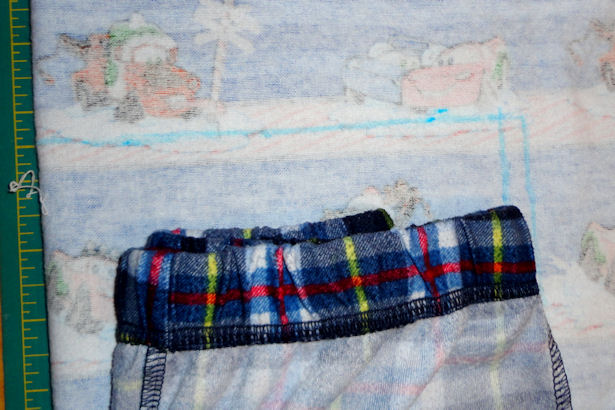 I measured the width of the elastic casing, then used a water soluble pen to draw a line on the flannel above the waistband.

There’s no photo for it, but I did the same thing at the bottom: measure the width of the bottom hem, then draw a line below the hem.

Have you figured out my major mistake yet? 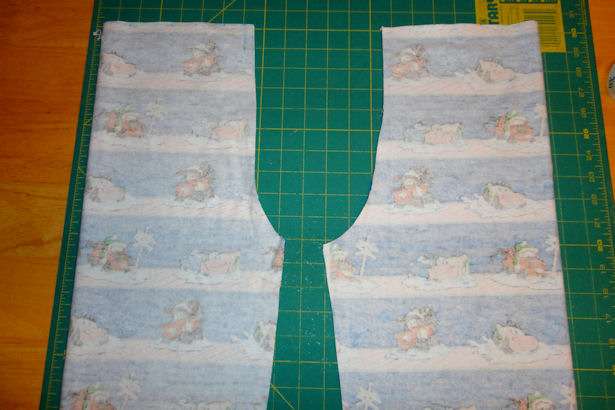 Then I flipped the pajama pants over to the front and arranged them with the side seam along the opposite fold. I drew the lines above the waistband and below the hem, then cut around the pajama pants, remembering to add 1/4″ seam allowance.

Or not. Do you see the mistake? I did…

In order to avoid a side seam I needed two pieces, each with a front and back curve.

Luckily it wasn’t a hard mistake to fix; it just added another step to the process and knocked me down a peg on the cool-o-meter. I simply cut each piece along the fold so I had four pieces: right front, right back, left front, left back. Then I serged the right front to the right back, and the left front to the left back, so I was back to having two pieces – each with a front curve and a back curve.

Here’s what YOU need to do to avoid a side seam… Obviously I don’t have photos since I messed up, so I hope these directions are clear enough. Don’t hesitate to contact me if you have any questions – I’m happy to help!

Follow my directions exactly, up to the point where I started cutting. DON’T CUT! Instead of cutting, TRACE around the pajama pants, adding 1/4″ seam allowance. Use a pin to mark the top of the waistband and the bottom of the hem. Remove the pajama pants from the fabric.

KEEPING THE FABRIC FOLDED, flip it over so the part you just traced face-down. Flip over the pajama pants and line up along the fold, making sure the waistband and hem line up with the pins. TRACE again, adding 1/4″ seam allowance.

Unfold the fabric – hopefully your tracings line up reasonably – you should have a front curve on one side and a back curve on the other side.

Refold the fabric right-sides-together so you can see your tracing lines along the center with selvedge edges touching. Cut along your traced lines.

Now you should have two pieces, each with a front curve and a back curve. 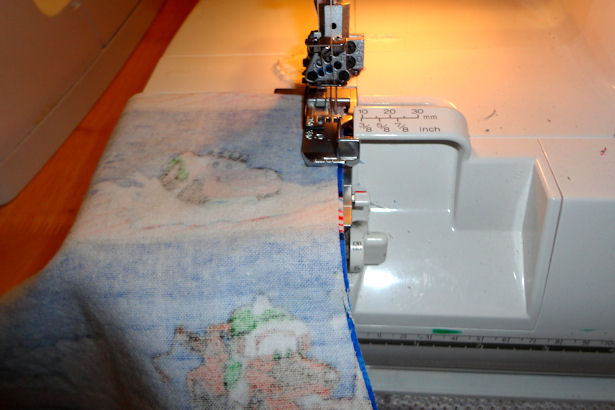 Fold one piece in half right-sides-together, matching the inner leg seam. Serge or sew from hem to crotch. Repeat with the other leg; you should end up with two inside-out tubes.

Turn one leg right-side-out. This is a little tricky, but stick with me… stick the right-side-out INSIDE the inside-out leg, matching the seams. The fabric should be right-sides-together, and when you line up the leg seams the crotch curves and front and back seams will naturally line up too. Pin if needed, then serge or sew from the waist, down through the curve and back up to the waist again. If you’re sewing instead of serging you may want to reinforce the crotch by stitching along the same seam line. 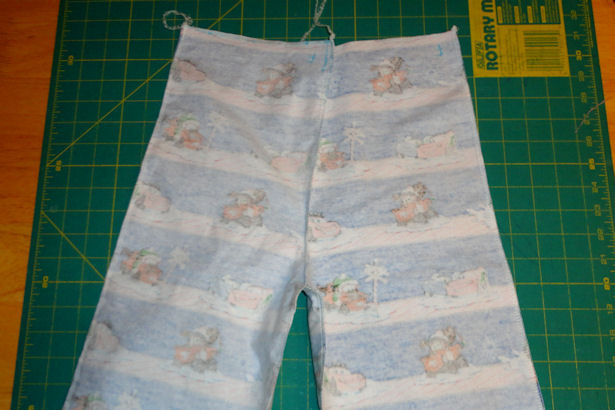 They should look like this, except you won’t have a seam on the outer legs… unless you made the same mistake I did. 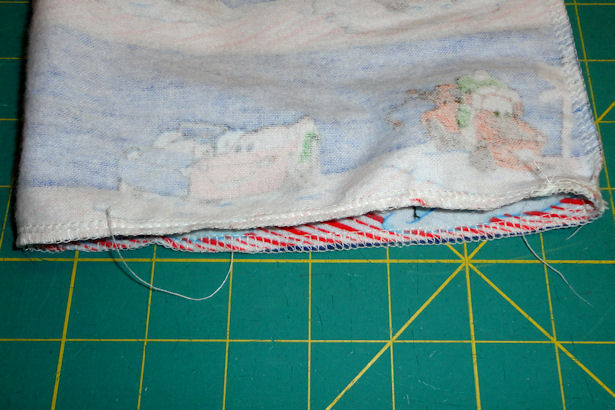 Finish the raw edges along the bottom by cutting with a pinking shears, serging, or sewing with a zig zag stitch. You could also turn 1/4″ under, pin, and press but that’s too much work for me when I’m making something this simple. 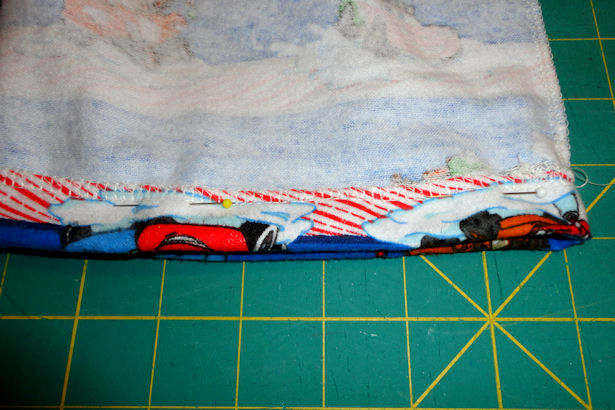 Turn the hems up and pin. My kids alway seem to outgrow length before width so I just turned them up 1/2″, but you can customize the length as desired. Sew near the raw edge to finish the hem. 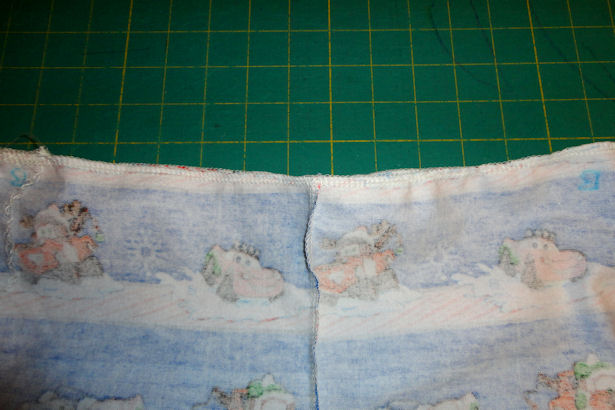 Finish the raw edges along the waist like you did for the hem. 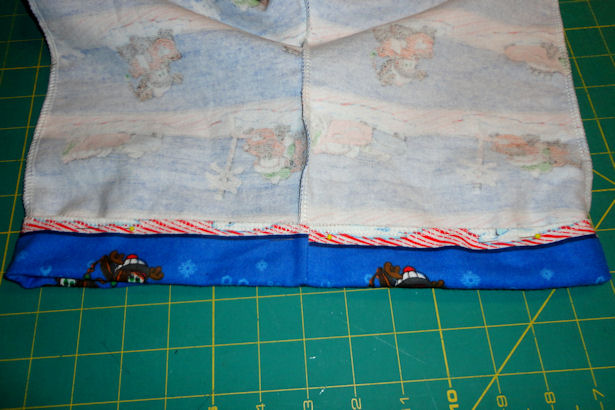 Turn the fabric under to form a casing make sure it fits your elastic plus about 1/4″ for the seam and pin. 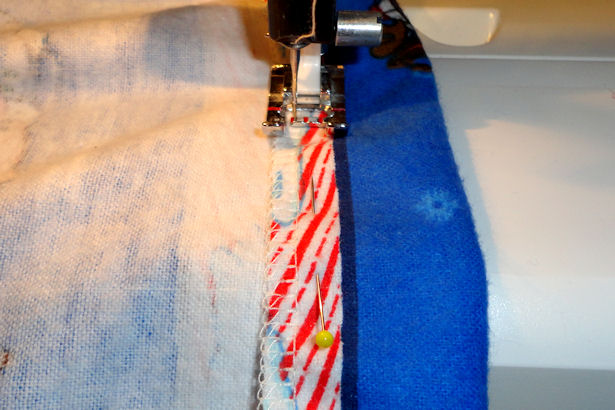 Stitch close to the finished edge, being sure to backstitch as you begin. 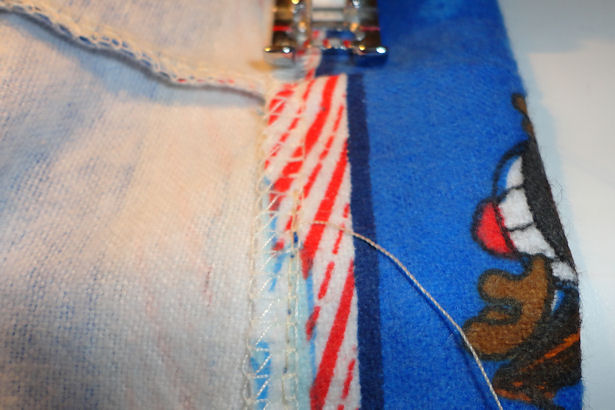 Leave an opening to insert the elastic; be sure to backstitch again so your stitching doesn’t pull out as the elastic goes in. 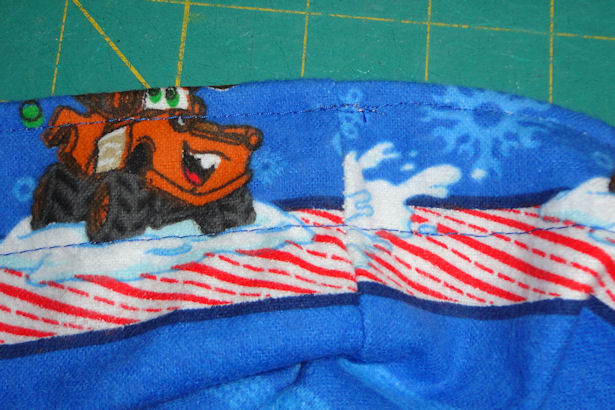 The pajama pants I used as a pattern had a line of stitching 1/4″ from the fold, so I did the same. Whenever I make elastic waists I add a second line of stitching toward the fold because I like the way it looks. 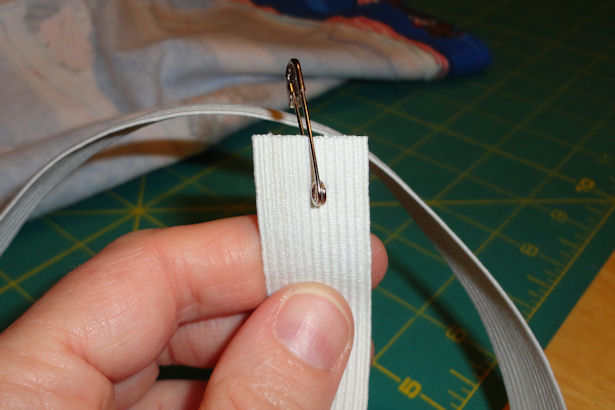 Place a safety pin in one end of your elastic. 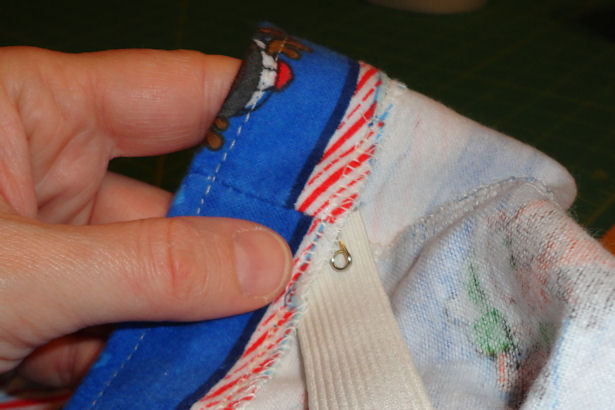 Insert the pin with the elastic in the opening you left in the waist casing. 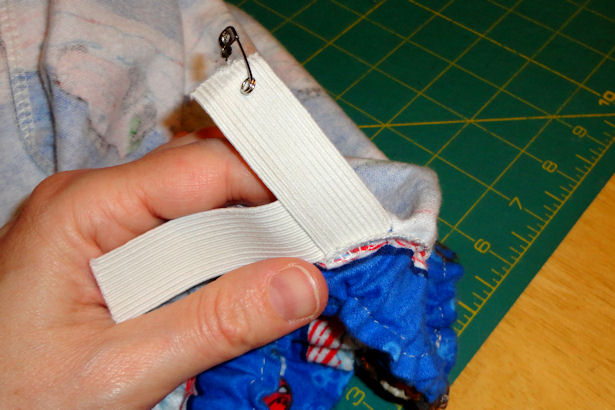 Carefully maneuver the safety pin and elastic through the casing. As you get closer to the opening, make sure the loose end of the elastic stays outside of the casing, or you’ll have to pull it all out and start over. 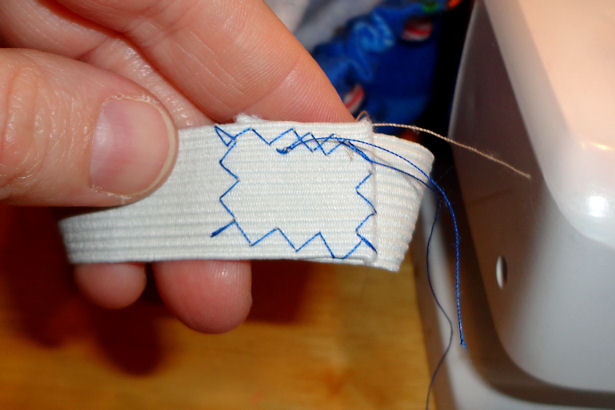 Overlap the ends of the elastic, being careful it’s not twisted, and stitch. I like to use a zig-zag stitch, I don’t know why. 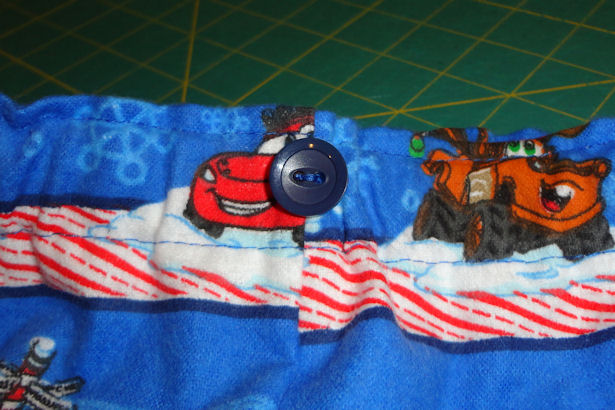 Finish your pajama pants by sewing a button to the front my Grandma’s trick so your child can tell which way to put them on. 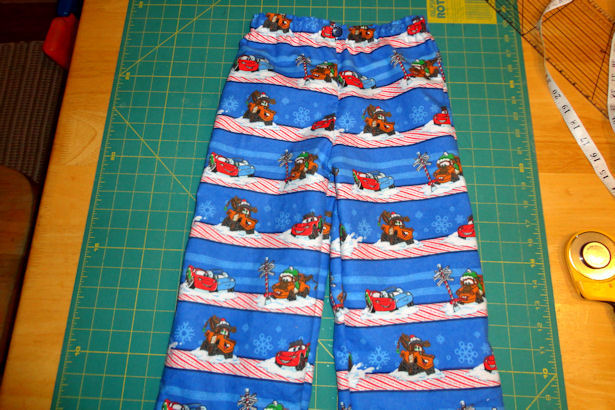 Ta-da! Little Guy was thrilled when he opened these on Christmas morning. They were so quick and easy to make even with my mistake that I plan to make a bunch more.

Be sure to send me photos of the kids pajama pants you make – you know I want to see them!