How I Spent my Summer Vacation – Day Four

To me, summer isnt summer until we’ve been to the pool. That’s probably one of the reasons I love taking the kids to swimming lessons so much. It was extra-fun this year because the boys and grandkids all had lessons at the same time so they could play together in the “baby” pool while they were waiting for their lesson time. 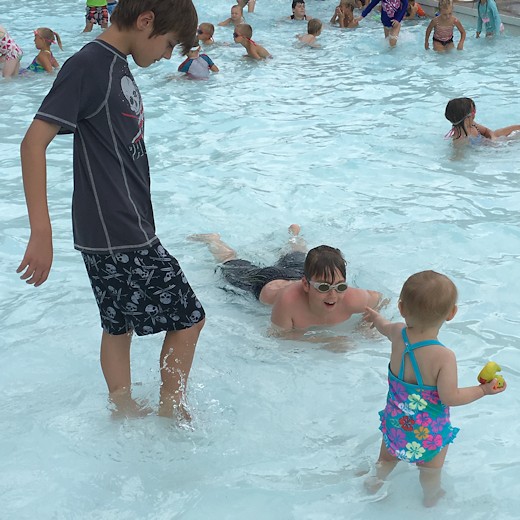 The first day we went Punkin was terrified of the water, but it didn’t take her long to get over her fear. Having Z-Man & iMatt nearby helps. 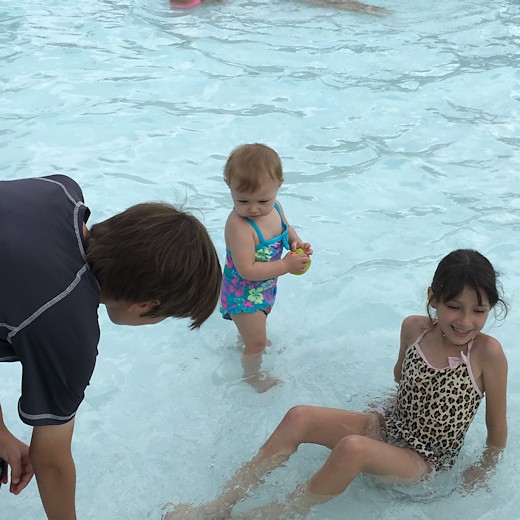 Peanut was never afraid of the water – like her aunt Angel Face. I can’t believe how big Peanut is getting – she’s going into second grade this year! 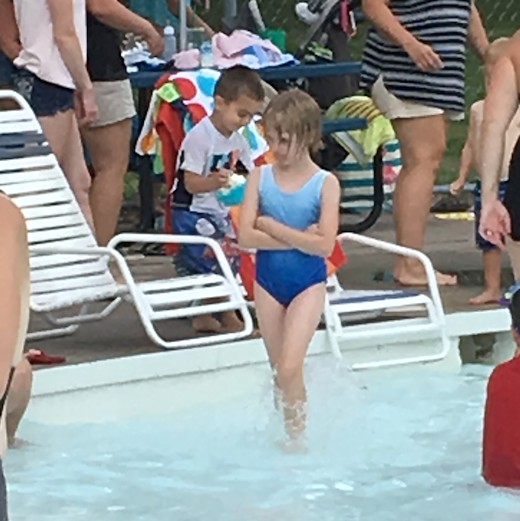 Love Bug is going into first grade already – how time flies! She wasn’t as crabby as she looks in the photo, she was just a bit cold. 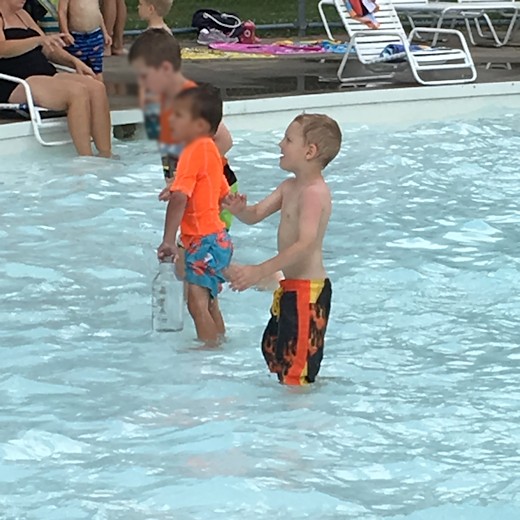 Caesar Boy is growing up quickly too – he’ll be starting preschool in the fall. He loves the water so much that it doesn’t matter how cold it is, he’ll still go in.

After swimming lessons we go home for lunch, then tackle the floor again. 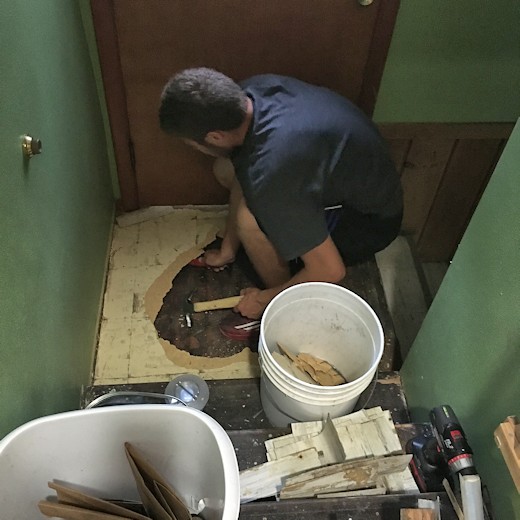 Jo-Bear decided to finish up the last few steps and landing. I was nervous to see what was on the landing, but to my relief it was the original hardwood flooring. Whew!

It seems to have a layer of black gunk on it, but the wood itself is in good shape so it should be gorgeous after refinishing. I get more and more excited with each section of original flooring that we uncover. 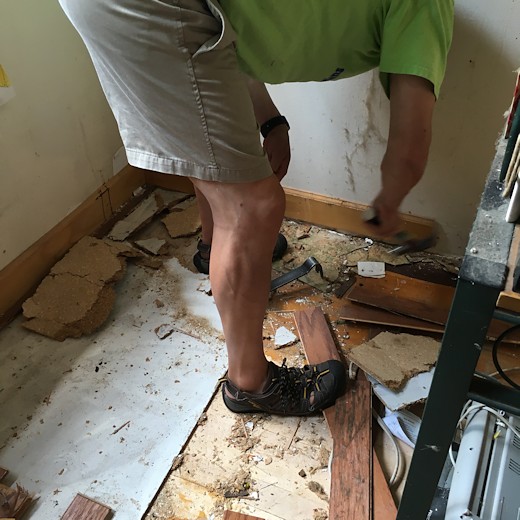 Teacher moved the stove and microwave stand, then started on the last of the flooring in the kitchen. We were both surprised by what he found… 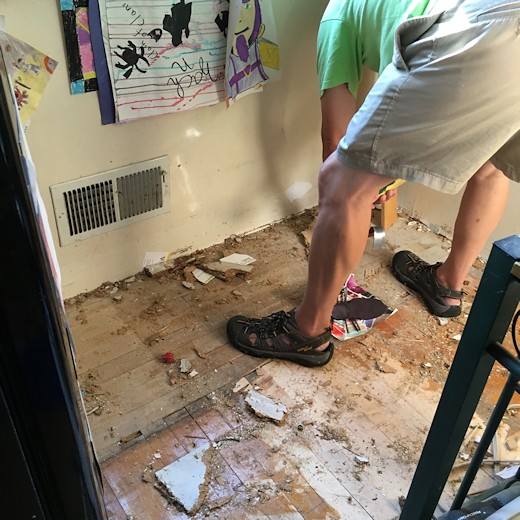 The floor under the windows was unfinished and ran the opposite way from the rest of the flooring!

Since the ends of the finished flooring are uneven and unfinished, and have a darker line running across them, we think there may have been built-in cupboards there too. I don’t know why there’s hardwood flooring there and not on the other end of the kitchen – I wish we had the original blueprint to answer some of these questions. 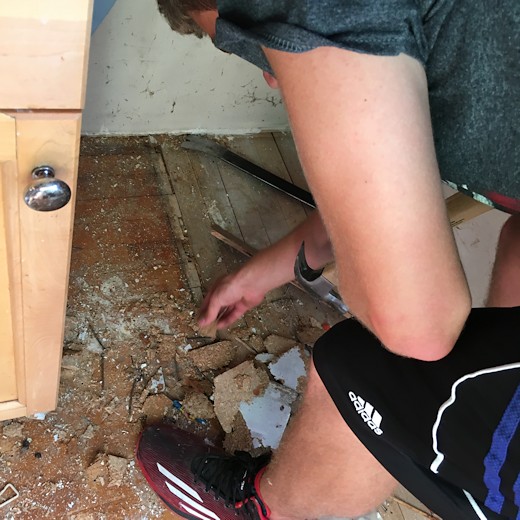 JoBear helped move the refrigerator then worked in that corner.

Teacher and I haven’t discussed details about refinishing, but my thought is that we should patch in the larger gaps and putty the smaller ones, but leave that section running the “wrong” way. It’s the way it was originally built and I think it adds character to the room.

That’s it for the kitchen – we’re done, right?

Silly rabbit, of course not!

When we started this project I thought we’d do the kitchen and leave the rest for later, but we kept tripping on the edge where the newer flooring met the original in the doorway to the kitchen. I was worried that the child care children would trip on it too and DYING to see if the dining room was also hardwood so we decided we’d continue the destruction into the dining room. 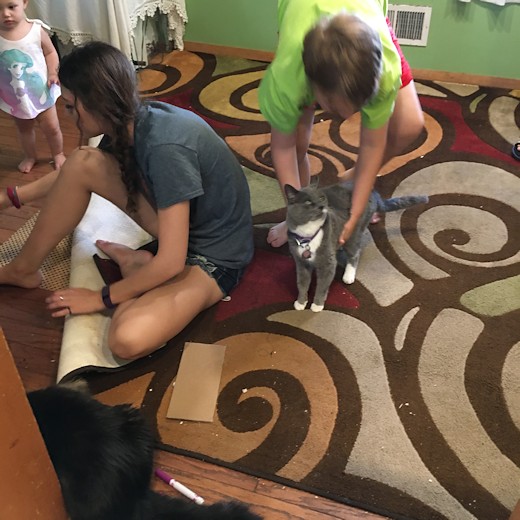 And by “we decided” I mean Jo-Bear decided. He and his accomplices started moving dining room furniture into the play room before Teacher and I noticed what they were doing. 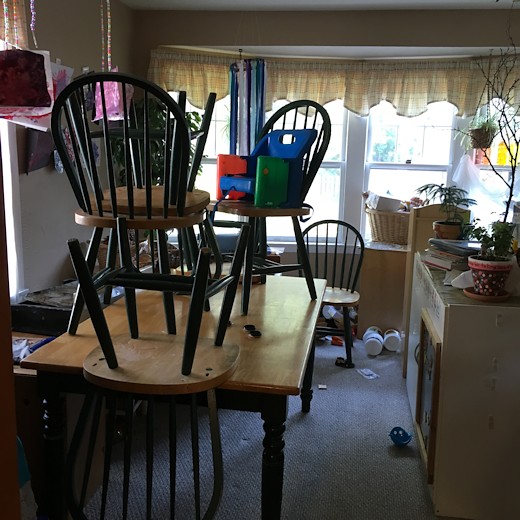 Luckily we don’t need the play room right now. You never realize how much stuff you’ve accumulated until you have to move it! 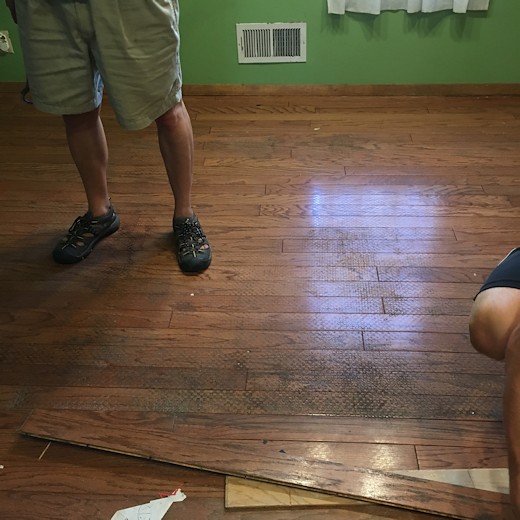 I felt guilty that we were tearing it out after all the time and money we spent putting it there, but it served us well for almost 17 years. And hopefully what’s underneath will be even better! 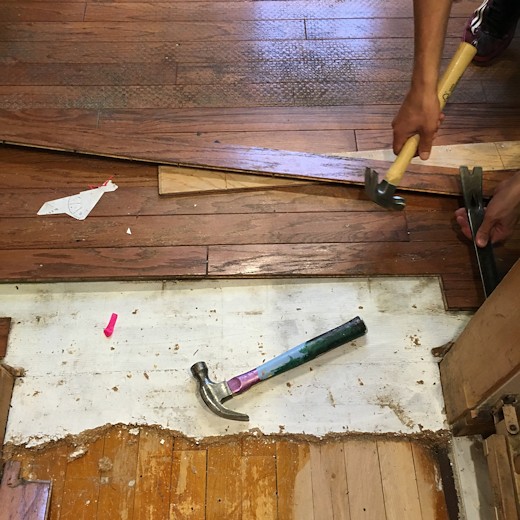 There’s the evil edge that everyone trips on. And Jo-Bear’s already started ripping up the floor – it’s too late to go back now.

Any bets on what we’ll find?